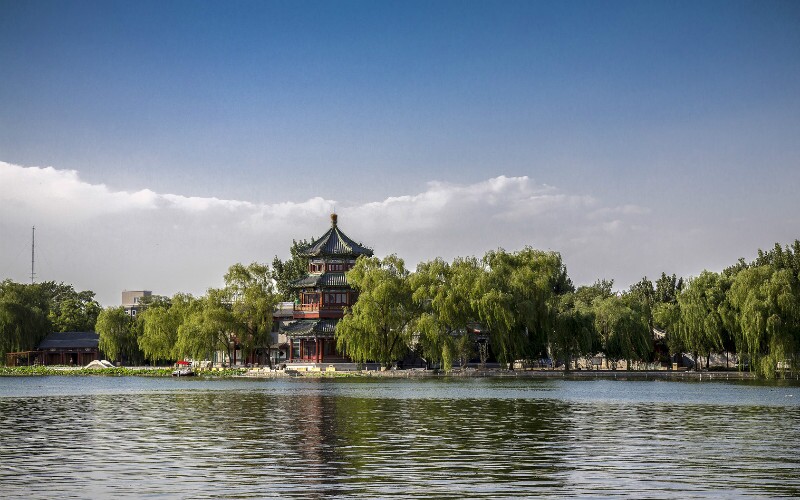 Shichahai is a scenic spot in the central urban area of Beijing. It is located near the north gate of Beijing Beihai Park, consisting of Qianhai, Houhai, Xihai as well as the scenic spots and historic sites around it.

There are a lot of bars in Shichahai, mostly built near the bank. Some of them are just cabins and some are two-story buildings. All the bars are uniquely decorated in different styles, and this area is permeated with an intoxicating romantic air.

Like Sanlitun Bar Street, Shichahai Bar Street is also the most famous bar area in Beijing, but they are quite different in style. Shichahai Bar Street has beautiful scenery in Houhai; there is a lake, boats, bridges, bars and people there. The youthful vigor of the modern city is hidden in the old Beijing hutongs. At night, the street will become a passionate world, though it may seem a little cheerless during the daytime.

Quite a few of the bars there are actually transformed quadrangle dwellings on the bank, so you can walk to the crisscrossed old streets from the other side of the bars.

The Prince Gong Mansion and Garden

The Prince Gong Mansion and Garden

The Prince Gong Mansion and Garden are located in Front Haixi Street. The mansion is very large, consisting of many quadrangle dwellings; the garden is exquisite and elegant with rockeries, zigzag verandas, pavilions, pools, flowers and trees. The mansion is so extravagant and it originally belonged to He Shen, the Qianlong Emperor's favored minion. Later, after the demise of the Qianlong Emperor, He Shen was forced to commit suicide and his family property was confiscated. Emperor Jiaqing transformed the mansion into a prince's mansion. In the early years of the Xianfeng Emperor, the mansion was granted to Prince Gong Yixin as his mansion. Now the mansion is partially opened, and the ticket price is 20 yuan.

In the south side of the western Yandaixiejie Street is the famous Yinding Bridge, which connects Houhai and Qianhai. On the bridge, visitors can see Xiangshan Mountain.

Guanghua Temple, in the Ya'er Hongton, was built in the Yuan Dynasty and it became known as the Jingshi Library in the late Qing Dynasty and the early period of the Republic of China. Now it is the location of the Buddhist Association of Beijing. It is opened to visitors freely, but the opening times are only on the 1st and 15th of each lunar calendar month.

Shichahai can be called a paradise for photographers. There are things worth shooting at any time of the year, no matter whether it is day or night. The nights there are very beautiful. When the weather is good, there will be excellent sunsets and beautiful rosy clouds.

The Beijing Hutong Tour is now part of the scenery in Shichahai. Every day you can see tourists following the tour guide on foot or on the specially-made tricycles through the old streets in Shichahai, where they experience the warm quadrangle dwellings and the extravagant prince's mansion. Tourists can also enjoy the fascinating Shichahai sceneries by boat, and experience the culture there on tandem bicycles.