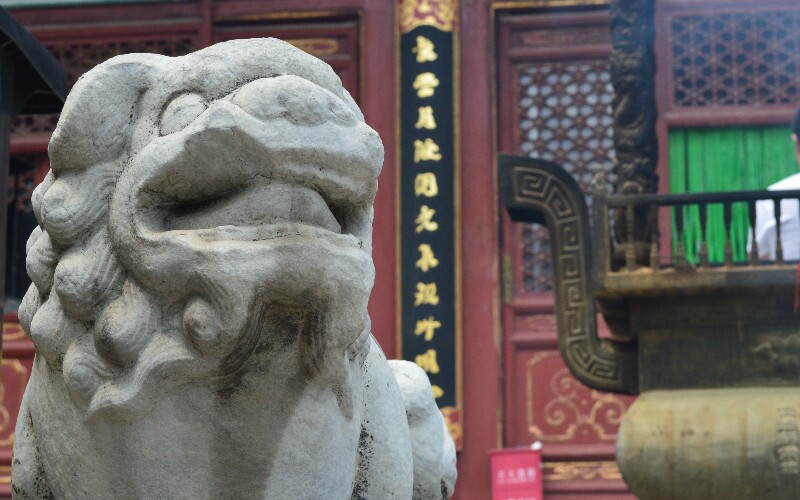 Facing south, backed by mountains, Tanzhe Temple is encircled by nine tall mountains. They are in the shape of a horseshoe, and the temple looks like it is being surrounded by nine huge dragons. The cold wave from the north-west is blocked by the high peaks. As a result, the climate there is warm and wet.

In the temple, there are towering old trees, pagodas and palaces. Based on its topography, the whole temple has an ingenious layout and is well-proportioned. Besides, with the embellishment of bamboo and flowers around it, it has a much more beautiful environment.

Tanzhe Temple was originally established in the Western Jin Dynasty (307 AD). So far, it has existed for more than 1,700 years. It is the first temple built after the introduction of Buddhism to Beijing. There is a proverb stating that "Tanzhe Temple came into being first, and then came Beijing City".

At that time, Buddhism failed to be accepted by people, so it developed very slowly. After that, the suppression of Buddhism was carried out twice in the Northern Wei Dynasty and the Northern Zhou Dynasty. Therefore, there had been no developments since its construction was completed.

It was not until the Tang Dynasty that Buddhism began to flourish. Tanzhe Temple also flourished gradually and reached a peak until the Ming and Qing Dynasties when it had a few ups and downs.

Temple Worshipped by the Most Visitors in Beijing

As a famous old temple in Beijing, Tanzhe Temple received many tourists and pilgrims throughout history, and was worshipped in by a great number of people. Since the Jin Dynasty, there had been emperors in each dynasty who visited the temple to pray and worship Buddha. Numerous imperial concubines, dukes and ministers also went there, not to mention the common people. Ever since the Ming Dynasty, Tanzhe Temple has been a firm place for people in Beijing to enjoy spring outings and Buddha worshipping.

The first Tanzhesi Temple Zen Tea Culture Festival aims at promoting the traditional tea culture, which was celebrated in 2008. During the culture festival, Tanzhisi Temple will launch a series of products "Tanzhesi Zen Tea" to help visitors pray. Moreover, a unique product "Tanzhesi prime cake" will be launched for the first time, using high-quality raw material, and cooked with Tanzhesi millennium Suzhai refined production process. It can be described as the best gifts for friends and family.

During the Zen Tea Culture Festival, the very traditional performance that the Emperor offers incense to Buddha will also add new content to the long history of the tea culture as well as tell the very history in a humorous way.

Facing southwards, the main constructions of Tanzhe Temple can be divided into three parts: mid, east and west.

Pilu Pavilion is an attic of two floors and is constructed from wood. Standing in Pilu Pavilion and looking afar, you can have a panoramic view of the temple and the remote mountains.

The east part consists of the imperial palaces for the emperors of the Qing Dynasty for their short stays there. They are mainly courtyards, among which the Pavilion of Floating Cups is the most famous one. In the pavilion hangs a holographic horizontal tablet of "Yi Ting" by Emperor Qianlong.

The west part has scattered pathways and yards. Some of the Buddha halls are square and some are round. The Goddess of Mercy Pavilion is the highest Buddha hall and is also the highest construction in the temple. Its corners are fastened by brass bells.

There is a copper pot of 1.85 meters in diameter and 1.1 meters in depth in front of the Hall of the Heavenly King. It is what the monks used for cooking.

What's more, there is a much bigger pot in the temple, being 4 meters in diameter and 2 meters in depth. It can contain 592 kilograms of rice at one time and it has to cook for 16 hours before the porridge is done. Due to its long diameter and thick bottom, it boils slowly with a gentle fire. As a result, the porridge is sticky and sweet.

The Hall of the Heavenly King is at the west end of the Goddess of Mercy Pavilion of Tanzhe Temple. On the porch in front of the hall there is a stone fish of 1.7 meters in length and 150 kilograms in weight. It looks like a copper fish, but it is actually a stone one. It can produce five "notes" if you beat it.

It has a legend that it was a treasure from the Dragon King's Palace of the South China Sea. The Dragon King gave it to the Jade Emperor. Later, the Jade Emperor sent it to Tanzhe Temple to help get rid of the calamities when the men's world suffered a serious drought catastrophe.

During a night of strong wind and heavy rains, the stone fish fell from the heavens into the yard of the temple. The original stone fish no longer exists, and the stone fish in the temple now is a copy that was made afterwards.

A giant and tall ginkgo tree grows at the east side of Mahavira Hall of Tanzhe Temple. Its tree trunk has grown 4 meters wide and 30 meters high. It was crowned as the "Emperor Tree" by Emperor Qianlong. It was planted in the Tang Dynasty, with a history of over 1,000 years. On its symmetrical side is an "Empress Tree". Interestingly, both trees are male plants. Therefore, they both bear no fruit.

Two huge purple magnolia trees stand to the east of Pilu Pavilion of Tanzhe Temple. Their tree trunks are more than one foot wide and 12 meters high. Their full bloom period is between April and October every year. They are at least 200 years old.

Early April: lilacs and magnolias in Tanzhe Temple will be in full bloom. Hanami festivals are also occasionally held at Tanzhe Temple.

The number of people visiting the temple is much bigger than usual at weekends, and on the first and the fifth days of the lunar calendar, while the rest of the time the temple is relatively quiet. It takes almost half a day to visit the temple as it is very large in scale.