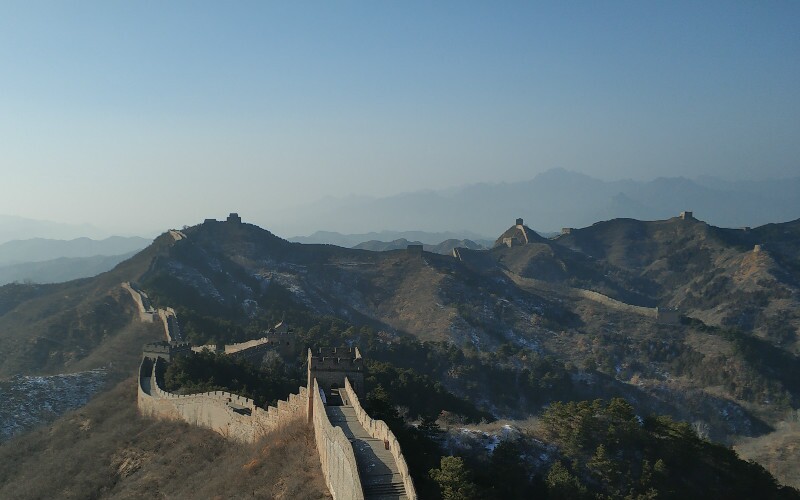 Zhangjiakou Prefecture contains a total of 1,476 kilometers of Great Wall sections of, and there are more than 1,000 beacon towers.

Zhangjiakou has a dense distribution of Great Wall sections with diversified modes of construction, including walls built with rammed earth, piled stones, and bricks. Because of these characteristics, Zhangjiakou has earned itself the name "Museum of Great Walls."

The Oldest Sections of the Great Wall

The Great Wall Sections with the Densest Distribution

The Highest Section of the Great Wall in China

The Rarest Sections of the Tang Dynasty Great Wall

The Tang Dynasty (618–907), a golden dynasty in ancient Chinese history, built a section of the Great Wall at Zhangjiakou, although there are few historical records to prove it.

Most Great Wall Sections of any Region

Except for Yangyuan and Xiahuayuan, Great Wall sections can be seen in all other counties of Zhangjiakou. The Great Wall can be seen everywhere in Zhangjiakou, if castles, beacon towers, and courier stations are counted.

There were 69 fort towns and castles established inside of the Great Wall in the Ming Dynasty in Zhangjiakou.

Twenty-two courier stations in Zhangjiakou served as transfer stations for information and military supplies, more than in any other prefecture in China.

Southeast of Shangyi County, 39 kilometers of Ming Great Wall was gradually built from 1368 to 1620 to prevent Mongol invasion. The wall is called the 'Exterior Great Wall' and 'Border Wall' (Bianqiang).

The Shangyi section of the Great Wall is built on loess hills. The wall has various towers of circular, conical, trapezoidal, and cuboidal shapes.

It is a grand ancient construction, which draws many travelers.

Dajingmen was built during the first year of the reign of the Shunzhi Emperor in the Qing Dynasty (1644) and is an important mountain gate. Dajingmen is one of the 'Four Famous Passes' of the Great Wall of China, together with Shanhai Pass, Juyong Pass, and Jiayu Pass. It is famous for its steep topography.

Qingbiankou is in Xuanhua County, approximately 15 kilometers southeast of Zhangjiakou, and 200 kilometers northwest of Beijing. It is an important, strategically-located fortification in the Ming section of the Great Wall.

Xuanhua is in a wide flat river valley surrounded by mountains, which made setting up a defense system difficult.

Since the Wanli Emperor's reign (1573－1620) in the Ming Dynasty, the Qingbiankou section of the Great Wall was added to and repaired numerous times, forming a complete defense system with complex fortifications. There were three parallel walls and nine doors.

Because of battles, erosion, and dismantling for building materials, visitors today can hardly see any of the original Qingbiankou section of the Great Wall. In summer and fall it is best for visitors to ascend the beacon towers, and overlook Qingbiankou's Great Wall relics and feel the vastness of its construction.

Since 1999, the Qingbiankou section of the Great Wall has been gradually restored in different phases.

There are many flights from Zhangjiakou Ningyuan Airport to the main cities of China. It is very convenient to travel to Zhangjiakou by air.

There are over 20 trains running daily from Beijing to Zhangjiakou, and the journey takes about 3–5 hours.