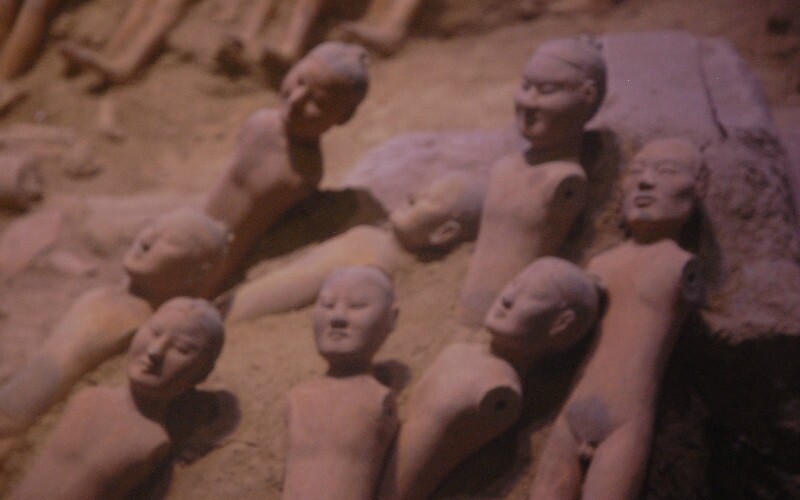 Weishan Terracotta Warriors is closed now. The reopen date is to be announced.

The Terracotta Warriors pit in Weishan was a Han Dynasty burial pit. The pit is 9.7 meters in length, 1.9 meters in width and about 70 centimeters in depth. Over 100 colored terracotta warriors were unearthed in this pit. According to the Han Dynasty aristocrat burial system, the terracotta warriors were arranged in an orderly manner with the cavalry in the front, chariots in the middle, and foot soldiers in the rear. The cavalry was composed of 30 soldiers with five in each row. The terracotta warriors on horses have an imposing appearance and are as vivid as real people. The clay horses are painted with clear contours, standing with their guardians. The ears and tail of each horse don't connect with the horse's body, but stick into the horse's head and crupper respectively; its ears and tail can move freely. Three chariots are in the middle.

There are two pits. The first is about 9.7 meters long, 1.9 meters wide and 0.7-0.9 meters deep. The terracotta horses in this pit are arranged in a southern to northern direction. Overall, it reflects the arrangement pattern of ancient aristocrats going out. More than 400 funeral objects are laid there. Due to the broken roof, the terracotta horses, carriages and warriors are severely damaged. Besides, there are over 170 terracotta warriors, about 50 horses, four carriages and thousands of shields. Many ancient instruments have been found too, such as ancient drums. The second pit is boarding pit one in the west. In the second pit, people have unearthed one carriage, two horses and seven terracotta warriors as well as five terracotta maids.

The Terracotta Warriors in Weishan are a very good alternative to the globally-known Terracotta Army in Xi'an if you are unable to make a trip to Xi'an.

jinan Jinan Travel Guide - How to Plan a Trip to Jinan