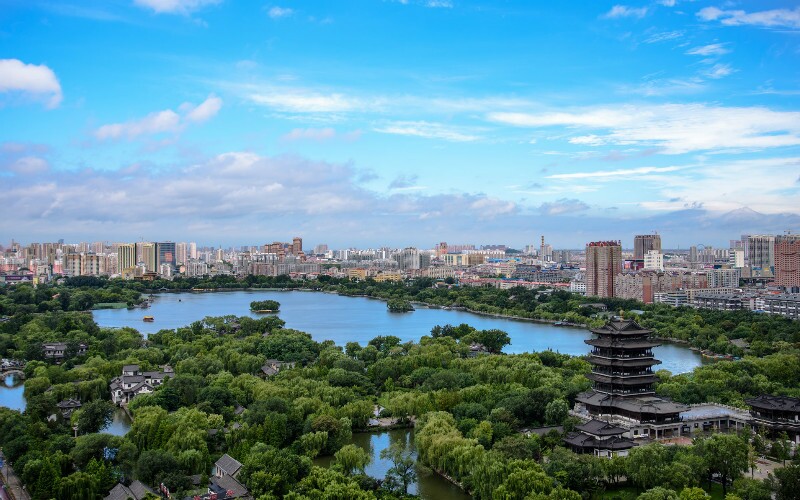 Jinan Travel Guide - How to Plan a Trip to Jinan

As the political, economic and cultural center of Shandong Province, Jinan is situated in the middle of the west part of Shandong Province with Zibo to the east and Tai'an (and Mount Tai) to the south, backing onto the Yellow River and facing Taishan Mountain, whose topography lowers from south to north.

Jinan also produced a hostof talented people in history, represented by Bian Que - a medical scientist of the Spring and Autumn Period (770 BC-476 BC), Zou Yan -a master of the Five Element Theory of the Warring States Period (475 BC-221 BC), Fang Xuanling-Prime Minister of the Tang Dynasty (618-907), and Li Qingzhao - a famous female poet of the Song Dynasty (960-1279). The greatest poet in Chinese history, Li Bai wrote many poems praising the beautiful natural scenery and cultural relics of Jinan during his lifetime.

With a history of over 4,000 years, Jinan is very rich in historical relics, including the site of the Shun (an ancient tribe leader) culture of the 3rd century BC, the Great Wall section of the State of Qi, the Simen Stone Pagoda built in the Sui Dynasty, and the painted sculpture of Arhat in Lingyan Temple which was built in the Song Dynasty（960-1279）.

Located in the temperate zone of East Asia, Jinan has a sub-humid continental monsoon climate with four distinct seasons, featuring a dry spring, a hot and rainy summer, a cool autumn and a cold winter, where the annual even temperature and precipitation are 14.3°C(57.7°F) and 660.7 millimeters, and the hottest and the coldest temperatures are 40.5°C(104.9°F) in July and -14.9°C (5.18°F) in January respectively.

The best times to visit Jinan are from April to October, and you can have a chance to appreciate the red leaves at Red Leaves Valley in autumn.

Jinan dishes belong to Shandong Cuisine (one of the eight famous cuisines of China), featuring fresh, tender, savory and crisp foods, which have an emphasis on selecting condiments and cooking techniques.The famous Jinan dishes are represented by fried carp with sweet and sour sauce, chicken cubes in chili sauce, roasted pork intestines, two fried crispy ingredients, the Yu’s braised chicken and Jinan roasted duck. In addition, Jinan snacks such as steamed dumplings, spiral cakes and fried dumplings are also favored by locals and foreigners alike, and the noted restaurants in Jinan are listed as follows.

The signature dishes in therestaurantare bean threads and marinated meat in a baked bun.

Therestaurantis famous for its barbecues of various kinds in Jinan.

Hotels and hostels of Jinan are of various levels and are well-equipped with modern service facilities, which you can select according to your budget, and you’re advised to book a hotel in the city center so that you can easily visit famous attractions in the daytime and appreciate the night scene as night falls.

Below are the highly-recommended hotels and hostels in Jinan.

Jinan is the transportation hub of Shandong Province, where a transportation network consisting of airways, highways, waterwaysand railways has been formed, and it’s easily accessible from the major cities of China. The inner-city transportation, such as public buses and taxis, are also very convenientin Jinan.

The airport buses (20 yuan each) shuttle on the hourfromYuquan Senxin Hotel to the airport from 6:00 am to 6:00 pm each day, which pass Heping Road, Erhuan East Road and Jingshi East Road in succession.

You can also take a taxi from Jinan city center to the airport with the ticket fare of 80 yuan. For those visitors whoare going to start for the airport from Shimen, you can take bus 3, 70, 75, 84, 89 or 121 to the airport.

Jinan Railway Administration is stationed in Jinan, making it the biggest transportation hub of Shandong Province.

There are three major railway stations in Jinan:

It is the largest railway station in Jinan, from which you can reach the major cities such as Beijing, Shanghai, Xi’an and Guangzhou of China.

The trains from the station are mainly for Dandong, Taiyuan, Qingdao, Taiyuan, Luouyang, Beijing and Weihai.

The trains from the station are mainly for Hangzhou, Xuzhou, Tianjin, Fuzhou, Shanghai and Beijing.

Beijing–Shanghai Highway, Jinan–Qingdao Highway and Jinan–Liaocheng Highway run across Jinan, where there are seven major bus stations listed below.

Over 9,000 taxis are availablein Jinan. The starting price of a taxi is 7 yuan for the first three kilometers (1.9 miles), and 1.5 yuan per kilometer will be charged after that.