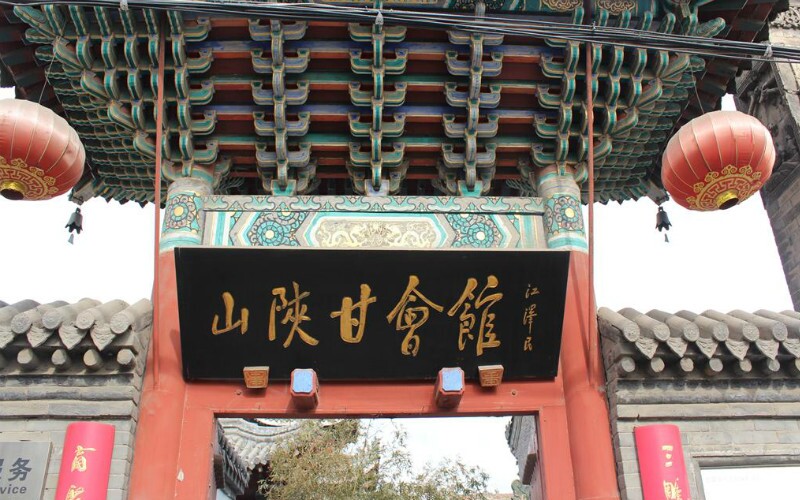 This building is also called the Shanxi-Shaanxi-Gansu Guildhall 山陕甘会馆. When the Grand Canal connected Kaifeng to the rest of China and another canal opened that connected Kaifeng to Shandong Province, Kaifeng became an important commercial center. However, in 1642, Kaifeng was flooded by the last of the Ming rulers to try to stop the advance of the Manchus from the north. The Emperor Kangxi started to rebuild the city about 20 years later.

During the Qing Empire period in 1776, business people from Shaanxi Province, Shanxi Province, and Gansu Province needed a place to meet and trade along the canal. Now, the building is an architectural highlight in Kaifeng where people can see the parts of the guildhall and the artistic decoration.

Parts of the Complex

The Shanxi-Ganshu Guildhall consists of the screen wall, the opera theater, the drum and bell towers, the Pailou (decorated archway), the audience hall, and the auxiliary buildings on both sides.

The Shanxi-Ganshu Guildhall faces south. In front of it, there is a big decorated brick screen wall. The screen wall is covered by glazed tiles. It is used to protect and shade the guildhall.

In ancient times, the opera theater was used to make sacrifices for festivals, to redeem people's vows to a Daoist god, and to offer birthday congratulations. There are three rooms in the opera theater, and the theater has two parts. The front part is used to hold formal performances, and the back part is used as the actors' dressing room.

The Drum Tower and the Bell Tower

The Drum Tower and the Bell Tower are all covered by glazed tiles. The towers are decorated with two layers of overhanging eaves, four straight pillars, and twelve small pillars.

The Pailou is a memorial archway. It is a kind of commemorative structure. The Pailou was used to eulogize the noble values and good morals of Kwanwoo who was a famous brave hero of the Three Kingdoms era about 1,700 years ago.

The Audience Hall is the main building of Shanxi-Ganshu Guildhall. It has a lot of wood carvings.

The subordinate buildings have some extra rooms.

kaifeng Kaifeng Travel Guide - How to Plan a Trip to Kaifeng