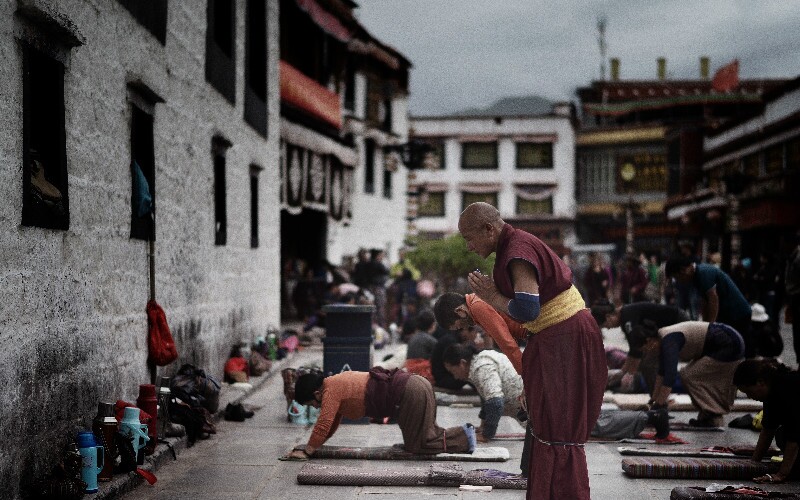 10 Interesting Facts About the Potala Palace

The Potala Palace is the highest ancient palace in the world. Once an imperial palace, seat of government, and monastery, it's now a must visit place for Tibet tourists.

Find out more interesting facts below.

1. No building is allowed to be higher than the Potala Palace.

The Potala Palace is built 117 meters (384 feet) up a mountain, with impressive zig-zagging steps up to it.

When you wander around Lhasa city's buildings, you will find that nothing - no new apartment block, branded hotel, ancient old house, temple, or monastery - is higher than the top of the Potala Palace. This is as a mark of respect for the holy site.

Potala Palace is built 117 meters up the Red Hill

2. The Palace was built as a present to the king's bride-to-be.

The palace was originally not as large as it is today. The original palace was built as a present from King Songtsan Gampo to his bride-to-be in 637 AD.

The original palace was destroyed during the ninth century, and the current one was built by the fifth Dalai Lama.

3. The palace was once deserted for more than 800 years.

The 33th king of Tubo (a Tibetan kingdom), Songstan Gampo moved his capital to Lhasa and started to build the Potala Palace in the seventh century. It became the main palace of the kingdom.

But early in the ninth century, after the Tubo kingdom's demise, the palace, and the whole city, was deserted. Other Tibetan regimes didn't have their capitals at Lhasa.

In 1642 , after the fifth Dalai Lama rebuilt the Potala Palace and finished the White Palace part, he moved his government to the palace.

From then on, the Potala Palace became the Dalai Lamas' residence, government offices, and an important place for religious activities.

However, after the 14th Dalai Lama fled to India in 1959, the palace has been more like a museum.

5. The Potala Palace has 2 parts: the White Palace and the Red Palace.

The red and white palaces had different functions.

The White Palace was built earlier and functioned as offices of the Tibetan government, assembly halls, and the Dalai Lama's residence.

The Red Palace was used as a house of prayer by the Dalai Lama. It was dedicated to the study of Buddhism and the advancement of the religion.

The red and white palaces had different functions.

The stupas in the palace are extremely luxuriously decorated with gold, silver, pearls, agate, coral, diamond, and other treasures.

The 5th Dalai Lama's stupa is the most luxurious, and most treasured one.

There are more than 18,000 jewels decorating the stupa, including pearls, coral, amber, and agate.

8. Only 2,300 Potala Palace visitors are allowed per day.

To protect the palace, and make sure visitors can have a reasonably uncrowded tour of the palace, the Potala Palace management authority controls visitor numbers to 2,300 a day.

So book well in advance!

9. The palace's wall is painted with milk!

Every year, just before the 22nd day of the 9th month of the Tibetan calendar, people will paint the palace's walls.

The “paint” for the walls is made of milk, sugar, honey, and some herbs, mixed with white lime.

Centuries ago, it took more than a month to finish the painting. Nowadays, it's done within 10 days.

The palace's wall is painted with milk

The thickest part of the palace walls is at the base: 5 meters (16 ft). The higher it goes, the thinner the walls are. The roof's parapet wall is up to 1 meter thick.

There are many more interesting details and anecdotes about Tibet's holiest palace for you to discover. We choose from the best Lhasa guides so you get the most from your tour.

If you are interested in touring Tibet, we recommend our popular Tibet itineraries for inspiration: