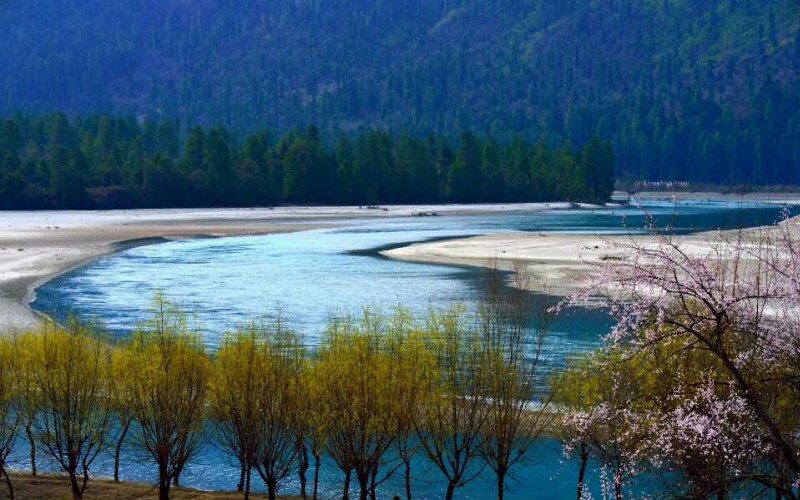 The Yarlung Tsangpo Grand Canyon, also known as Brahmaputra Canyon, is located in Tibet and lies where the Himalayas, the Hengduan Range, and the Nyainqentanglha Range all come together.

This canyon is a major tourist attraction, equal in wonder with the Potala Palace and Mount Everest. One of the best kept secrets of Tibet, the Yarlung Tsangpo  Grand Canyon was closed to the public from the late 1940s to the 1990s.

In 1993 permits to access the area became available and kayakers began to explore the area. Called the "Everest of Rivers" because of its altitude and challenging dangerous waters, this beautiful area has been rediscovered by adventurous tourists.

Climate of the Yarlung Tsangpo Canyon

The deep gorge receives moisture from the Indian ocean flowing through to the inner mountainous area, and turning the southeast part of the Qinghai-Tibet Plateau into a lush green subtropical oasis.

There are a total of 17 mountain peaks higher than 6,000 meters along the canyon. These mountain peaks are covered with snow and the climate on the slopes ranges from subtropical to temperate to Alpine to arctic.

Because of the extremely wide range in climate, and temperature, the Yarlung Tsangpou Grand Canyon has one of the most abundant and complex ecosystems in the world.

Among the rare species of animals found in the area are the Bangladesh tiger, the bear monkey, the giant boa constrictor, and the rare takin, a type of antelope. Flora in the region includes the fern tree, the Yunnan iron tree and different types of mosses.

The word Yarlung Tsangpo in the Tibetan ancient language means literally "water flowing down from the summit". This beautiful canyon passes between the mountains of Namcha Barwa (Nanjiabawa) and Gyala Peri, where it has an average depth of 5000 meters.

One of the most spectacular features of the Yarlung Tsangpo Grand Canyon are the two waterfalls, Rainbow Falls and Hidden Falls located in the Pemako region, which at one time were hidden by Tibetan monks who regarded them as sacred.

These falls have been called the most beautiful falls in all of China and may possibly have been the inspiration for a fictional place called Shangri-La which was described in a book called Lost Horizon, written by British author James Hilton.

Size of the Yarlung Tsangpo  Canyon

In 1994 the Chinese Academy of Science declared the Yarlung Tsangpo  Grand Canyon the largest canyon in the world, which was later substantiated by GPS which measured the canyon at 496 km long.

It is also said to be the deepest canyon. Covering 17,000 square kilometers and measuring 5,382 meters deep at its lowest point, this canyon surpasses both Peru's Kelka Canyon and the United States' Grand Canyon located in Arizona.

Customize a Tibet tour to include the Yarlung Tsangpo Grand Canyon, or start from scratch with our free consulting service, helping you to design a tour just right for you.