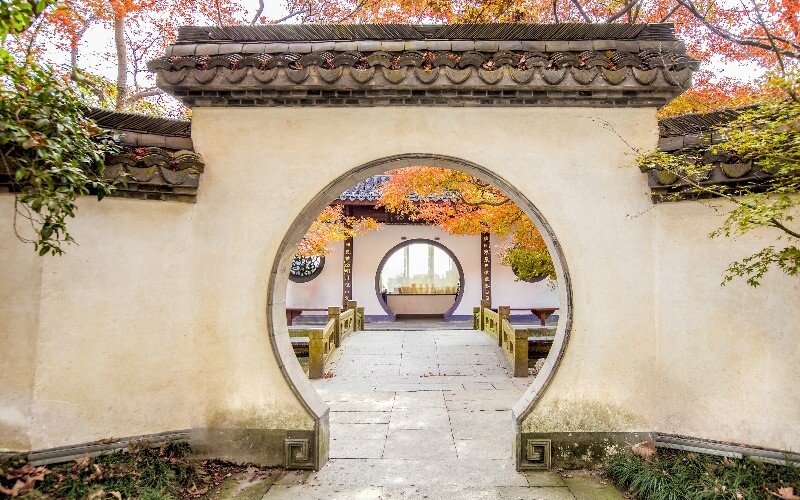 Chinese gardens are a special aspect of traditional Chinese culture and art. They are creative, relaxing areas; harmoniously mixing man-made architecture, painting, and calligraphy with natural scenery and horticulture.

The earliest recorded Chinese gardens were in the Yellow River valley in the Shang Dynasty (1600–1046BC). Back then they were very simple, only consisting of a raised platform surrounded by vegetation.

After their evolution of many dynasties, Chinese garden design matured as a comprehensive school of its own during the Qing Dynasty (1644–1912).

See more on The History of Chinese Gardens.

The Differences Between Chinese Gardens and Chinese Building Layouts

Contrary to the symmetry of Chinese traditional architecture, building plans, and even city layouts, Chinese gardens put more emphasis on accord with nature.

By using patterns found in natural landscapes and fengshui (geomancy), the plants and ground fit well with the artificial elements. Chinese gardens usually have winding paths and a range of features and ground levels.

The Philosophy of Chinese Gardens

The buildings and landscaping of a Chinese garden are designed and arranged deliberately based on their respective symbols and meanings in fengshui.

Auspicious items can be found abundantly. Pine, for example, was often used to represent longevity, tenacity, and dignity.

Chinese gardens are enclosed by walls as special places for the owner's private enjoyment.

Imperial gardens are mostly found in north China, with those in Beijing being most representative, displaying grandness and magnificence.

Imperial gardens have been a pet project of many emperors and empresses throughout China's long history. While gardens from the earliest dynasties have faded into history, many Qing-Dynasty (1644–1911) gardens remain.

At one time, only members of the royal family and their guests or servants were allowed to experience the beauty of these massive garden complexes, but in modern times, they are open to ordinary people.

Private gardens are mostly found in south China, especially in cities in the ‘south of the Yangtze River area, such as Suzhou, Wuxi, Nanjing, and Hangzhou.

Private gardens were designed and created as a place of retreat for ancient scholars to escape the chaos of the city and have private relaxation.

Private gardens in China aremore intimate than the grand imperial gardens, but their simplicity offers a unique form of beauty. These gardens were often used for parties, such as those during the autumn moon festival. One important characteristic of many private Chinese gardens is a rockery.