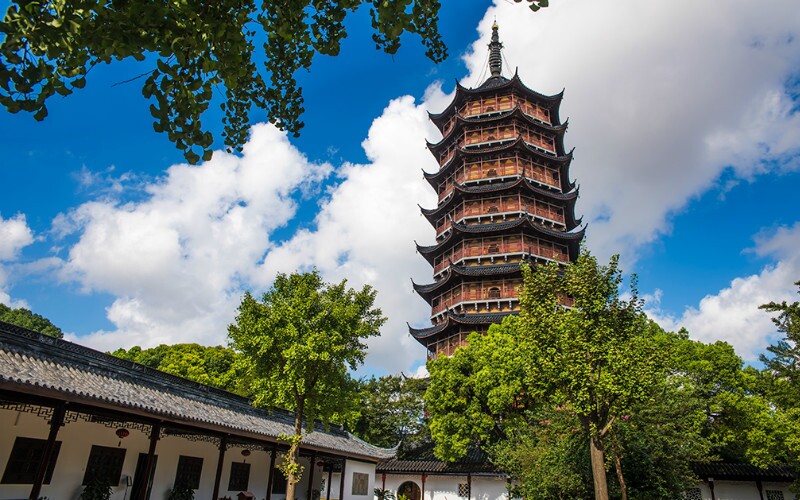 Different from the more typical low-rise buildings, pagodas were first popularized in ancient China. They provided people with spectacular views and often featured in Chinese poems.

Below we describe briefly the top 10 time-honored classic pagodas in China, for your reference.

In China, this is known as the Yingxian wooden pagoda. It is the oldest and tallest all-wooden pagoda in the world. It was built in 1056 and served as a Buddhist temple.

It's a 9-storey pagoda 67.3 meters tall, and 30.3 meters in diameter at the bottom, with an octagonal floor plan. It is constructed with wood, without any nails.

54 different kinds of dougong (斗拱，a unique Chinese structure of interlocking beams and crossbeams) were applied in the building, providing architects with some interesting research.

Dating from 652 AD during the Tang dynasty, it was first built for storing sutras and housing translators of Buddhist classics.

Due to age-induced decay, it has undergone several refurbishments. Today, the pagoda still maintains its original shape after reconstruction during the Ming dynasty. It has 7-storeys and is 64 meters tall.

The Iron Pagoda of Kaifeng

The Iron Pagoda in Kaifeng, Henan Province was built in 1049 during the Song dynasty. It is also a Buddhist pagoda, with Song-dynasty style; brick-made with glazed tiles.

The "iron" pagoda was not made of iron but brick. Its name became popular during the Yuan dynasty (1271-1368), because its color and sturdiness makes it look like iron.

With 13-storeys, it's an octagonal-based structure at a height of 55.9 meters. The Iron Pagoda with its densely stacked multiple storeys looks taller than the Yingxian Wooden Pagoda (at 67.3 meters).

Located 1.5 km northwest of Dali old town, the Three Pagodas of Chongsheng Monastery are three independent pagodas which form a symmetric triangle. They are also known as the Dali White Pagodas, since they are all covered with white mud.

The middle one, also known as the Qianxun Pagoda (千寻塔), is the oldest and tallest, built about 1,150 years ago. The other two were built only about 100 years ago.

The Three Pagodas are renowned in Dali for their antiquity, size and well-preserved state.

Learn more about the Three Pagodas

Leifeng Pagoda is at the north of West Lake, Hangzhou. Most Chinese people know about it because of the Legend of White Snake, a famous Chinese folk tale.

The original pagoda was built in 975 AD. It's an octagonal, five-storey structure built of brick and wood. During the Ming dynasty (1368-1644), the pagoda was attacked and its wooden structure was burned.

After that, the remaining brick skeleton fell into decay, since people believed its brick could repel illness and competed to steal the bricks. The pagoda eventually collapsed in 1924 due to lack of maintenance.

It was reconstructed in 2001, with a steel and copper structure, but restoring its previous architectural style.

It is one of the top 10 beautiful places of West Lake.

Liuhe Pagoda, literally the Six Harmonies pagoda, was built in 970 during the Song dynasty (960-1127). Located along the Qiantang River, it was originally built to dispel the annual tidal bores of the Qiantang River.

The pagoda stands 59.9 meters tall. Seen from the outside it's a 13-storey octagonal wooden structure; while from the inside it's a 7-storey masonry structure. It is one of the best-preserved masonry-timber structure pagodas in China. What's more, there's an ancient Chinese pagoda model exhibition hall next to the pagoda.

Located in Suzhou, the Tiger Hill Pagoda is one of the landmarks of Suzhou. The 7-storey pagoda is 48 meters tall, built with brick but in the timber-style of earlier eras. It's a representative 10th-century brick pagoda in the Yangtze River basin.

The original pagoda was first built in 601; the existing one began construction in 959 and finished in 961. During the Ming dynasty (1368-1644), the pagoda began to lean towards the northwest, due to its foundations. Now it's known as the "leaning tower of China".

The Songyue Pagoda is located at Songyue Monastery in Henan Province. It was built in 523 and has a rare dodecagonal shape. It is regarded as the earliest brick-structure pagoda in China still extant.

The pagoda was built with brick at a height of 40 meters, with an adhesive mixture of sticky rice juice and yellow mud.

Feihong is 47.6 meters tall, with 13-storeys. It is a masonry structure built using brick in octagonal pavilion style. Its eaves diminish inwardly at each tier. Around the pagoda's surface are exquisite sculptures and glazed ornaments.

Located in Xicheng District, Beijing, the White Stupa Pagoda is a rare Tibetan Stupa. It was designed and built in 1271 by a Nepalese architect Anigo, during the reign of Genghis Khan (1206-1227).

Standing at a height of 59.9 meters, it is the oldest and tallest Tibetan-style pagoda in China. It is composed of three parts: a 9-meter high Sumeru pedestal-style platform, an inverted bowl-shaped body and a steeple. Lots of diverse collections of Buddhist statuary were found in 1978 during the repairs.

If you want to explore other fascinating traditional Chinese architecture, have a look at our China tours, or let us know about your interest so we can tailor-make a tour for you.