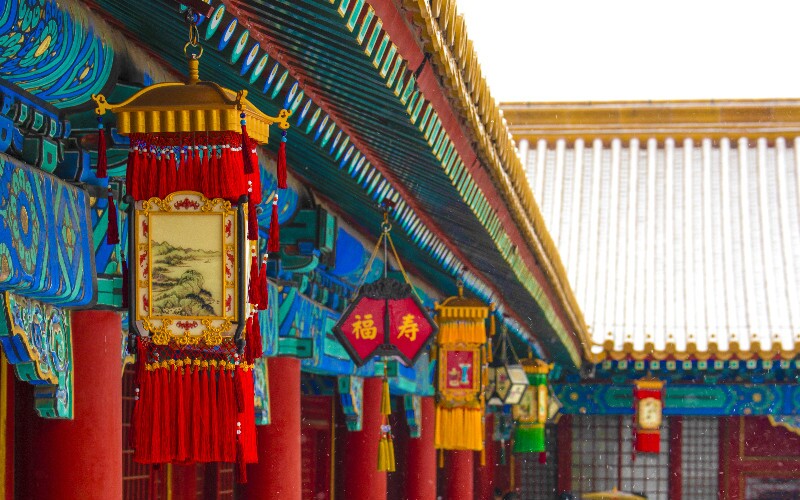 The Top 10 Facts on Chinese Lanterns for China Travelers

For centuries, the colorful, glowing red lanterns of China have inspired artists, historians, travelers, and locals alike. Chinese lanterns are more than just a beautiful site, though — they have deep historical roots and meaningful cultural symbolism that have been passed down from generation to generation...

Traditionally, Chinese lanterns are red and oval-shaped, decorated with red and gold tassels. In Chinese culture, the color red is believed to symbolize warmth, happiness, and good fortune. It's also considered the national color of China.

Lantern shades are created from thin paper or silk. The frames are created from bamboo, wood, wire, or rattan (a type of climbing palm indigenous to China). The lanterns are then decorated with calligraphy, paintings, or detailed embroidery.

In addition to the traditional oval-shaped lanterns, you can find square, rectangular, and spherical lanterns. Lanterns can be as small as a baseball or as large as a person.

2. There Are 3 Different Types of Lanterns

On holidays such as the Mid-Autumn Festival, you can find flying lanterns throughout China. These lanterns are similar to hot air balloons, propelled by a small flame that creates hot air to send the balloon into the night sky.

Floating lanterns are also common during lantern celebrations, like the Dragon Boat Festival. This festival takes place near a river, pond, or lake, and features floating lanterns in different shapes and designs.

Year after year, this event in Hong Kong is considered the grandest Mid-Autumn Festival celebration in all of China. You can watch kung fu demonstrations, experience the fire dragon dance, and of course, view lantern displays.

4. Lantern Design is Full of Symbolism

Art: Typically, lantern crafters will paint dragons for strength, bamboo for resilience, butterflies and flowers for happiness, and trees and plants for growth. The Chinese zodiac animal for the year also makes it into New Year lantern design.

Historians believe the first lanterns were used during the Eastern Han Dynasty (25-220).

Emperor Han Mingdi, a proponent of Buddhism, found monks who lit lanterns in the temples to show respect to Buddha on the fifteenth day of the first lunar month. He then ordered all temples, homes, and royal palaces to light lanterns that evening, which later became known as the Lantern Festival.

6. Lantern Meaning and Use Has Changed Drastically

When lanterns were first developed in ancient China, they were used primarily to provide light and in worship of Buddha.

Today, lanterns are mainly used in decoration and celebration of public festivals. Some places in China, like Beijing's Forbidden City and Pingyao's Ancient City, hang lanterns all year round for decoration.

Some Chinese people still believe that lighting lanterns ensures a prosperous future, but for most this is now to do with symbolism and spiritual superstition, rather than belief in Buddhist deities.

7. There Are 4 Major Lantern Festivals in China

All over China, people light lanterns during the Mid-Autumn Festival, the Chinese New Year, the Harbin Ice and Snow Sculpture Festival, and of course, the Lantern Festival.

The Lantern Festival is the best time to view Chinese lanterns. It takes place on the fifteenth day of the first Chinese lunar month, which is normally between February 5 and March 7. Lighting and viewing the lanterns with friends and family is the main activity of the festival.

The Harbin Ice and Snow Sculpture Festival is the world's best place to see ice lantern displays. From January 1 to February 15, travelers from all of the world visit the festival. One of the venue highlights is Zhaolin Park, where over 1,000 ice lanterns are illuminated.

8. Solving Lantern Riddles Is As Hard As "Shooting a Tiger"

A tradition that began during the Song Dynasty (960-1279) has lasted until today, and has become one of the most important traditions during the Lantern Festival.

Lantern owners write riddles using prose or poetry, and tape them to their lanterns. Lantern viewers will then try to guess the riddle in exchange for a small prize. Think you have what it takes? Try to solve this popular lantern riddle:

For the answer, see our Chinese Sayings page.

9. There Is Only 1 Lantern Museum in China

Located in the "Lantern Town of the South Kingdom" in Zigong, Sichuan Province, the Zigong Lantern Museum is the only one of its kind in China, and is even considered one of the Three Wonders of Zigong.

The Lantern Museum is important to the preservation of Chinese lanterns and ancient cultural relics. The museum's beautiful array of lantern displays are surely worth the visit.

In addition to the museum, Zigong hosts a wonderful lantern festival between February 8 and February 13. The festival is known for being full of local flavor and rich tradition.

Zigong is 215 kilometers, or about three hours by car, from Chengdu, the capital of Sichuan Province. For more information about getting to Zigong, visit our Zigong travel guide.

10. The Best Places to View Lanterns in China Are Nanjing, Beijing, and Pingyao

While the beauty of lanterns are celebrated all over China, we recommend visiting the following locations to experience the best Chinese lantern displays:

If you're looking to go big, the largest lantern festival in China is the Qinhuai International Lantern Festival, which takes place in Nanjing between February 4 and March 31.

For a classic, yet unique experience visit Beijing to view the beautiful lantern displays at many renowned sites, such as the Forbidden City and the Great Wall.

Take a step back in time and visit Pingyao, one of China’s best-preserved ancient walled towns. Experience the rich history of Chinese lanterns year-round in this quaint city.

Interested in Experiencing the Chinese Lantern Lights For Yourself?

We are here to help you plan your China adventure, and make your journey smooth, fun, and memorable.

We offer themed festival tours so you can experience the Chinese New Year lantern celebrations on your own.

Check out our popular tour ideas to visit the best lantern viewing cities, or personalize your own Chinese cultural experience.