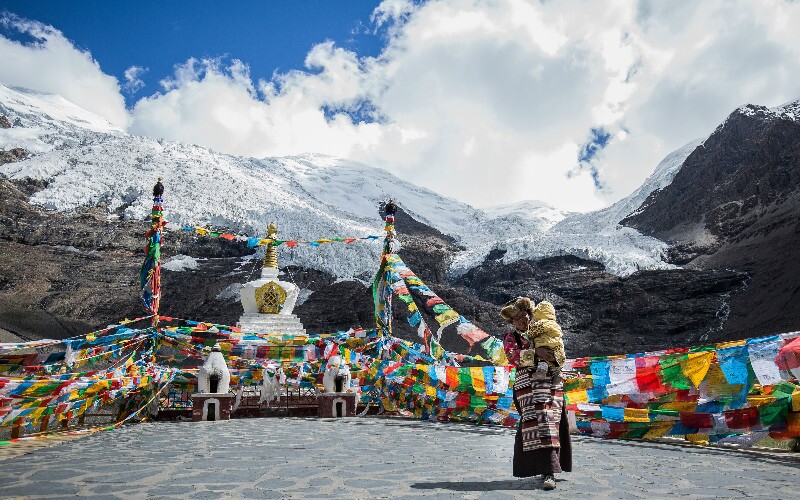 Most of China’s snow mountains are located in high altitude areas (examples in Tibet, some parts of Sichuan, Xinjiang and Yunnan are included below), where there is magnificent undeveloped natural scenery. Hiking and photography are the most popular activities in these snow mountain areas.

China Highlights has listed China’s top six snow mountains, all of which are the locals’ holy mountains. You can contact us and have us tailor-make a tour for you, if you have any interest.

Also read: The Six Most Beautiful Islands in China . 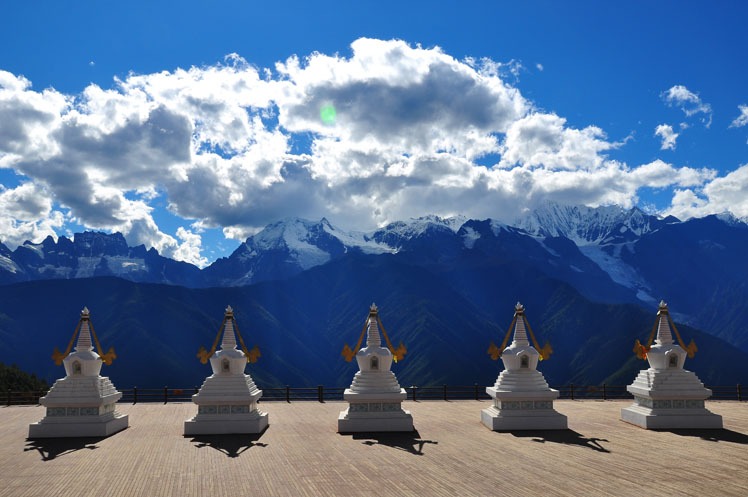 Meili Snow Mountain is the holy mountain cluster of local Tibetan people. In late autumn and early winter every year, pilgrims from Tibet, Sichuan, Qinghai and Gansu travel hundreds of kilometers to pay homage to the sacred mountains.

Meili Mountain Range: There are six mountains with an altitude over 6,000 meters in this mountain range, none of which have been successfully climed, and since 2010 all further attempts have been banned. The main peak, Kawadgarbo with a pyramid shape, rises 6,740 meters (21,221 feet) above sea level, the highest peak in Yunnan Province.

Cycling and hiking: If you are interested in cycling, you can rent a bike in Shangri-La and cycle to Meili Snow Mountain. The road is basic and mountainous, so the cycling is hard. However, the magnificent natural scenery along the route is worth it. Hiking in this area is also highly recommended.

Adverse weather: The rainy season of Shangri-La area lasts two months: July and August, and there may be landslides during this period. In the period from January to March, heavy snow might block the entrance road. 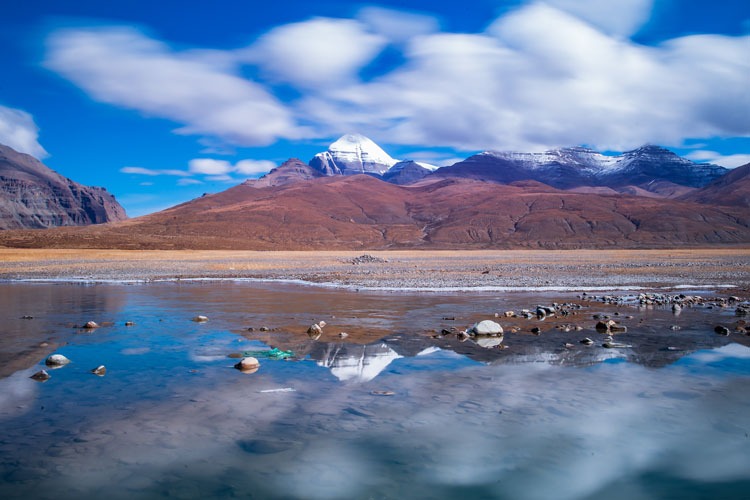 This pyramid-shaped snow mountain has more than 250 glaciers, and it is the headstream of the Ganges, the Indus, and the Yarlung Tsangpo - Brahmaputra. The part over 6,000 meters is covered by ice and snow all the year round. It is interesting that the side facing south is covered by thick snow, but the side facing north cannot keep any snow.

Mount Kailash is one of the most famous holy mountains of Tibet, and is especially popular among shutterbugs, explorers, and pilgrims. The mountain is surrounded by five temples, each of them has many precious historical relics, including sculptures, statues, and murals. These temples from five stops on the pilgrimage route around Mount Kailash. 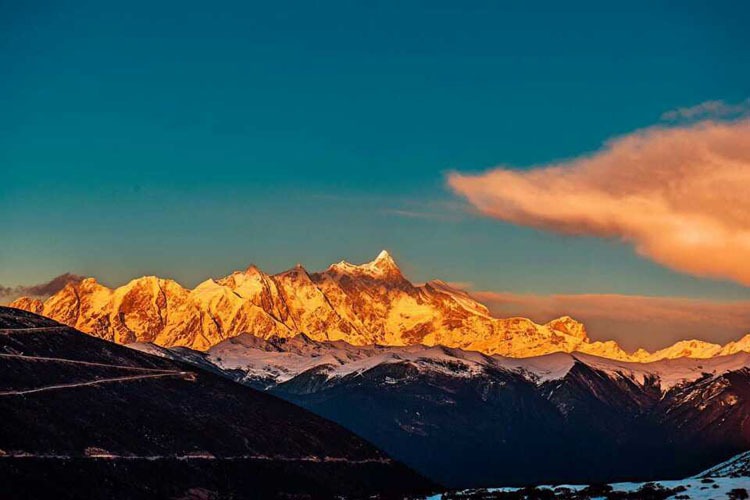 Most of the time, the peak of this magnificent snow mountain is covered by cloud and mist. Mount Namcha Barwa ranks the 15th highest mount in the world.

The rainy season in this area lasts from July to September, when it rains almost every day. Spring and early summer are the best times to travel to Mount Namcha Barwa.

Nyingchi in spring is very beautiful, especially in Taohua Valley, where the slopes are decorated with many peach flowers. Together with pure blue skies, light green trees, and magnificent snow-capped mountains, Nyingchi is a great hiking destination. 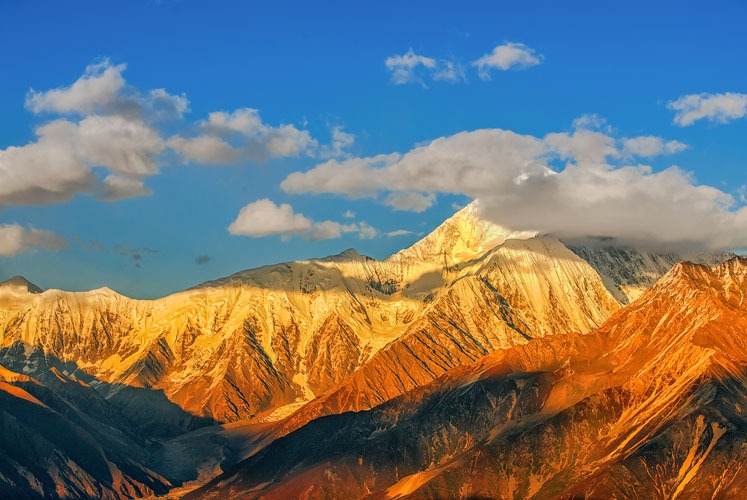 Mount Gongga is very famous among mountaineering fans, because of its high degree of difficulty of making it to the top (it is said that only 24 people were successful, and 37 people have died during the attempts), being higher than that of Mount Everest, and ranking only after Meili Snow Mountain and Yala Snow Mountain of the famous peaks in China.

Mount Gongga is surrounded by 20 snow mountains, which all rise 6,000 meters above sea level. The scenic area consists of Mount Gongga and surrounding peaks, Hailuogou National Forest Park (where visitors can bath in a thermal spring by a vast glacier), and several pure highland lakes.

Climate considerations: The rainy season in Mount Gongga area lasts from June to October, and the other months are the day season. April and May are the warmest months with burning sun. 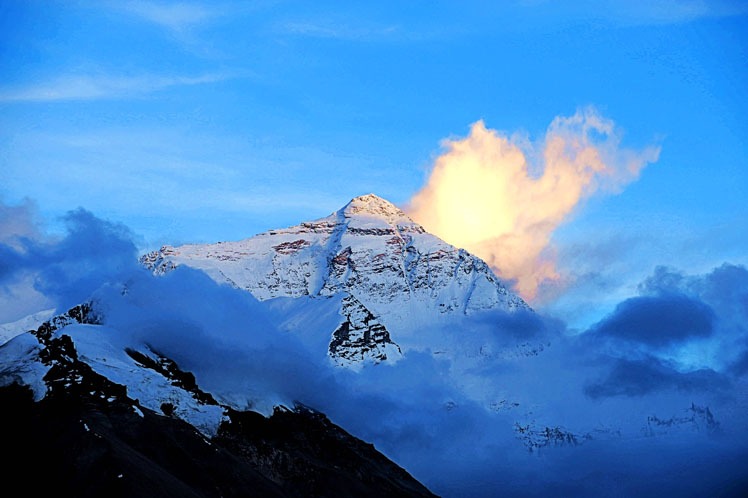 Mount Everest straddles the border of China and Nepal. The north col of Qomolangma is located in Tingri, and the south col is located in Nepal. In the Mount Qomolangma area, there are more than 40 mountains over 7,000 meters. Hence the scenery there is very magnificent.

The weather in the Mount Qomolangma area is very changeable. The rainy season is from June to mid-September. The best time for mountaineering is during the period from early September to late October, before the windy season (from November to February).

Mount Qogir is in the border of China and Pakistan, and is the highest peak of the Karakoram Mountains. Dangerous terrain and bad weather make the mountain one of the most dangerous snow mountains in the world.

The period from July to September is the best time to visit this area because of relatively nice weather and warm temperatures.

Most travelers to K2 are photographers and explorers. Peaceful lakes, pure-white snow-capped mountains, pure-blue skies, and the simple and unique lives and customs of the ethnic minorities make up a magnificent highland landscape.