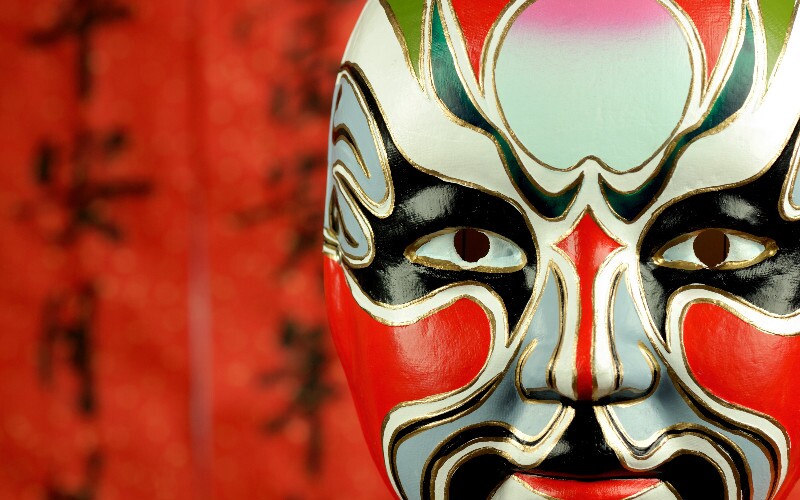 The best known Beijing Opera master ever. A superlative singer, actor and dancer of Beijing Opera female role Qing Yi and a towering figure in the Chinese theater.

Mei Lan-Fang was born October 22, 1894 in Tai Zhao of China's Jiangsu province. His grandfather and father were all famous opera actors. Mei began studying Beijing Opera at eight and played his debut role at 12. His performance in "Shattering Flowers" won him a special fame. He joined Xi-Lian-Cheng Theatrical Company at 14 and performed in Shanghai and elsewhere thereafter. He acquired a national reputation and was regarded as the leader of the PearGarden (A name refers the opera community circle). Western world began to know Beijing Opera through his performances. He toured Japan twice (1919 and 1924), the United States once (1930), and the Soviet Union twice in 1932 and 1935.

After the outbreak of Resistance War against Japanese in 1937 he settled in Hong Kong. He then returned to Shanghai but stopped his performance for five years. He then maintained his beard and mustache, and refused to perform for the occupying Japanese army. He resumed his stage career after the end of the war in 1946. Thereafter he did both stage and film work. There is a film Mei Lan-Fang's Stage Arts featuring his stage performances including several play sections. His last masterpiece "Recommanding the Army" was shot into a colored film. He also served as director or member of several cultural organizations.

MEI Lan-Fang rediscovered many long-neglected theatrical masterpieces and brought them back on stage with his enforcements. He was credited with having revived the traditional Chinese arts of dancing and pantomime. He also enriched the stage performance by learning from Chinese Kungfu, like the swordplay in his Farewell My concubine. He put special attention on the ladyship of his performance. He was said that once he even pretended to assault his wife to observe her frightened reaction and then apologize to her Because he did not satisfy with one of his actions in a play.

Mei Lan-Fang died on August 7, 1961 in Beijing. His masterpiece plays include "Farewell My Concubine", "The Drunken Concubine (or Drunken Beauty)", "Recommanding the Army", "Scattering Flowers", and "Eternal Regret" etc. A bunch of female role actors and actresses follow his style, among which his son, MEI Bao-Jiu, is a superb.