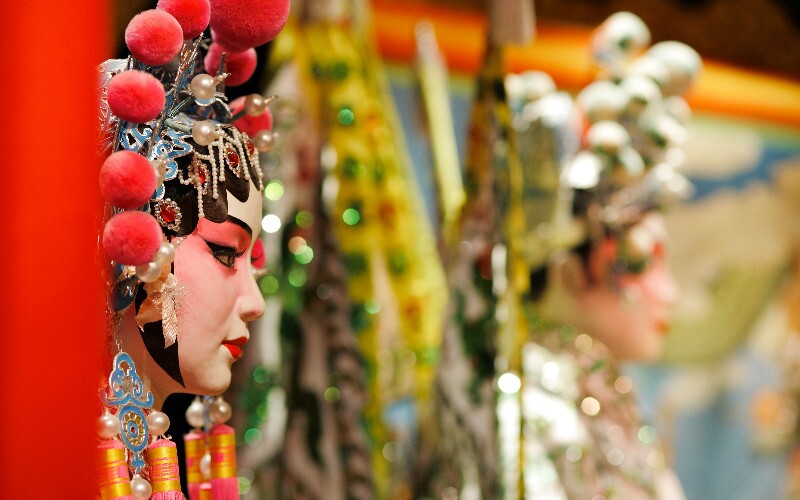 The theatrical or musical occupation was considered the lowest class in the society. Opera performance used to be a male dominated profession. Mixed performances were prohibited. All the roles were played by male. Most of the actors entered the Training School as apprentices in their childhood because their parents could not feed them. They had to absolutely obey the commands of the school master and teachers. Any of the failure or even success would result in some heavy slashes or other physical punishment. Far earlier than the dawn, they had to get up to practice their voice and performance skills and do their mandatory works. Director CHEN Kai-Ge's film Farewell my Concubine gives a picture of the situation. Female were rare and usually took this profession because of their family background. But this also gives an account on how hard they should practice their skill in order to be a successful player. It is said that a flash in the stage is a reflection of ten years unremitting hard work.

The best known Beijing Opera master ever. A superlative singer, actor and dancer of Beijing Opera female role Qing Yi and a towering figure in the Chinese theater.

Mei Lan-Fang was born October 22, 1894 in Tai Zhao of China's Jiangsu province. His grandfather and father were all famous opera actors. Mei began studying Beijing Opera at eight and played his debut role at 12. His performance in "Shattering Flowers" won him a special fame. He joined Xi-Lian-Cheng Theatrical Company at 14 and performed in Shanghai and elsewhere thereafter. He acquired a national reputation and was regarded as the leader of the PearGarden (A name refers the opera community circle). Western world began to know Beijing Opera through his performances. He toured Japan twice (1919 and 1924), the United States once (1930), and the Soviet Union twice in 1932 and 1935.

After the outbreak of Resistance War against Japanese in 1937 he settled in Hong Kong. He then returned to Shanghai but stopped his performance for five years. He then maintained his beard and mustache, and refused to perform for the occupying Japanese army. He resumed his stage career after the end of the war in 1946. Thereafter he did both stage and film work. There is a film Mei Lan-Fang's Stage Arts featuring his stage performances including several play sections. His last masterpiece "Recommanding the Army" was shot into a colored film. He also served as director or member of several cultural organizations.

MEI Lan-Fang rediscovered many long-neglected theatrical masterpieces and brought them back on stage with his enforcements. He was credited with having revived the traditional Chinese arts of dancing and pantomime. He also enriched the stage performance by learning from Chinese Kungfu, like the swordplay in his Farewell My concubine. He put special attention on the ladyship of his performance. He was said that once he even pretended to assault his wife to observe her frightened reaction and then apologize to her Because he did not satisfy with one of his actions in a play.

Mei Lan-Fang died on August 7, 1961 in Beijing. His masterpiece plays include "Farewell My Concubine", "The Drunken Concubine (or Drunken Beauty)", "Recommanding the Army", "Scattering Flowers", and "Eternal Regret" etc. A bunch of female role actors and actresses follow his style, among which his son, MEI Bao-Jiu, is a superb.

A male role Lao Sheng player and the founder of TAN Style. He had a sounding reputation. It is said the all Lao Sheng players at his time were following his styles. The imitation of his arias could be heard across the street everywhere. He was a best known, superb to any other names like warlord or famous political figures. His famous plays includes " A Fisher's Rebelling", etc. His descendants follow his style, including his son, TAN Xiao-Pei, grandson, TAN Fu-Ying, great grandson, TAN Yuan-Shou, and great great grandson. The most successful was Tan Fu-Ying.

A male role Lao Sheng player and the founder of the MA Style. He was a graduate of the famous Beijing Opera training school Xi Lian Cheng. He apprenticed JIA Hong-Ling, and then followed YU Shu-Yan. Later he formed his own style with characters of sweet, fluent and natural, which is best known as MA style. His preserved plays include " Orphan of Zhao Family", "Borrowing Eastern Wind", "Gan-LuTemple", "Meeting of the Heroes", etc.

A Lao Sheng player and the founder of the QI Style. (His stage name is Unicorn Boy Qi Ling Tong, which also commonly means seven-year-old). Staged first at seven, he was the flag of Beijing Opera in south China while MA Lian-Liang the north. He was not with the perfect conditions for a Beijing Opera player. But he was excellent in using his strongness and developed a characterized style of his own. He enriched the performance by learning skills from other operas. His preserved plays include " Four Scholars" , " Hurry to the City Wall", " Chasing Han-Xin", etc.

A Lao Sheng player and the founder of YAN Style. He had been a famous Beijing Opera amateur before he formally became an opera actor. He followed TAN Xin-Pei and developed his own singing style which enphasizes the tones and his arias are mild and sweet. His preserved plays include "Moarning Zhou Yu", "Giving XuZhou", etc. His son, YAN Shao-Peng, daughter-in-law and grandson, YAN Xing-Peng, are all his style followers. Xing-Peng got the first place for Lao Sheng in a national Beijing Opera performing competition a few years ago.

A female role Qing Yi player. Born in Nan-Gong of Hebei Province, He entered the "Triple Happiness Opera School" and was trained first to be a "Wu Sheng" and later "Qing Yi". He had a very good skill of acrobat and dance. His performing style was highly regarded and famed as SHANG Style. His famous plays include "Mad after Lost Her Son", "Liang Hongyu" etc. Shang was also dedicated in training new players. He founded the "Rong Chun Opera School".

A Qing Yi player. Born in 1904 and died in 1958. His playing style was recognized as CHENG Style. His voice became narrow and muffled when he was in his teen. So his success attributed to his talent and consistent efforts. Most of his plays were about tragedies and the roles he took were sorrowful. His famous plays include " Unicorn-trapping Purse", "Tear on Depress" etc. He toured Europe in 1932. The countries he visited include France, United Kingdom, Germany, Belgium and Switzerland.

A Qing Yi and Hua Dan player and his performing style was entitled XUN Style. He, along with MEI, SHANG and CHEN, is regarded as one of the Four Great Female Role Players. Born in Dong-Guang of Hebei Province, he entered "Triple Happiness Opera School" to learn Hebei Opera. He then switched to playing Beijing Opera after his graduation. He was good playing lively and naughty girls and heroines.

A female role Qing Yi performer. His style is recognized as ZHANG Style. His plays include " River-Facing Paguda", "Meeting by poem" etc. He was regarded the number one of the Four Junior Great Female Role Players.

A great Jing player and the founder of QIU Style. His father was a famous Jing player who had a major influence on his opera career.He entered the famous opera school of "Fu Lian Cheng". He leared from a variety of players including Lao Sheng players and applied into his performance and introduced many reforms into Jing arias and actings. He created a situation that all Jing players follow his style. His students include FANG Rong-Xiang. His famous plays include " Execution of CHEN Shi-Mei", "Town of Chi-Sang", "Stealing the Royal Horse" etc.