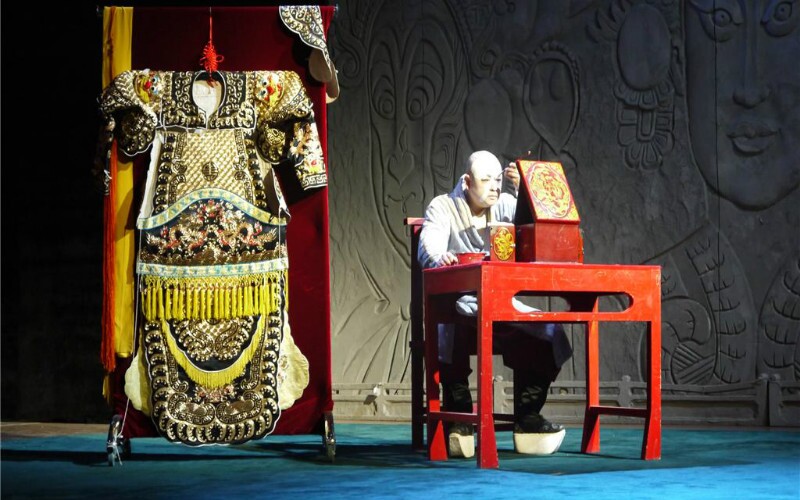 In the past, stages in most Chinese theaters were square platforms exposed to the audience on three sides, even all sides sometimes. In the latter case, performances could be watched from the back also. An embroidered curtain known as a shoujiu was hung over the platform, which was thus divided into two parts: the back stage and the stage.

In front of the curtain, stood a table on which were laid various musical instruments to be used for the performance, and musicians were seated nearby. That table, together with musicians, occupied a part of the facade of the stage and could be seen by the audience. That is why the Peking Opera orchestra has traditionally been known as Changmian which means stage set-up.

When Peking Opera began taking shape, its singing was accompanied by two flutes only, known as Shuangshoudi (dual flutes)-the chief Dizi and the assistant Dizi. With such simple accompaniment, the opera actors felt the singing was rather strenuous and lacked flexibility, though the music for voices was then also quite simple, without much florid ornamentation. Later, a musician named Wang Xiaoshao in the Sixi Troupe proposed using the Huqin as a substitute for the Shuangshoudi. He was the first Huqin player. A period of practice allowed actors of the troupe to feel that, supported by the huqin, the singing became full of vigor and more harmonious. The new mode of accompaniment was well appreciated.

Although the dizi were replaced by the huqin, they were still of use of when melodious and elegant qupai (tunes) were needed to accompany such stage acts as dress-changing, sweeping and banquet table-setting. Anyway, their use became rare, so they had no regular players, but were looked after by huqin and yueqin players.

The huqin initiated by Wang Xiaoshao was a soft-bowed fiddle. Another huqin player named Li Si ( Li the Fourth, whose real name was Li Chunquan ) was the pioneer in the use of the hard-bowed huqin, which was easier to manipulate and gave a better effect. As a result, the soft-bowed huqin met the same fate as the shuangshoudi and was replaced by the hard-bowed one.

Drummers must be able to handle all styles of operas, whether characterized by singing, acting, or acrobatic fighting; and huqin players, able to support all roles whether sheng, dan or jing. In other words,a competent drummer or huqin player must be a versatile musician,capable of adapting to various styles and meeting different demands.

Private huqin players appeared in the first years of the reign of Emperor Guangxu of the Qing Dynasty (in the late 1870s).

The original Peking Opera wenchang did not include the erhu, which was introduced when Mei Lanfang first staged his new opera, Xishi, the Beauty in the 1930s. Mei felt that the combined sounds of the jinghu, yueqin and xianzi were too weak and monotonous as instrumental accompaniment for the singing in his new opera. Meilanfang's private player Xu created a new two-stringed fiddle after the model of the erhu used in a local opera in east China. That was the first Jingerhu. When played together with the jinghu, the new fiddle produced a very sweet and mellow sound, thus win- ning Mei Lanfang's immediate appreciation and approval.

The newly-created jingerhu was for a period known as the Mei- style erhu. Its role in Peking Opera has become ever more conspicuous and it is now an indispensable instrument at least for accompanying the singing of qingyi.

A famous Peking Opera wusheng actor, Yu Jusheng first introduced the danao into Peking Opera in his performance of TielongMountain.