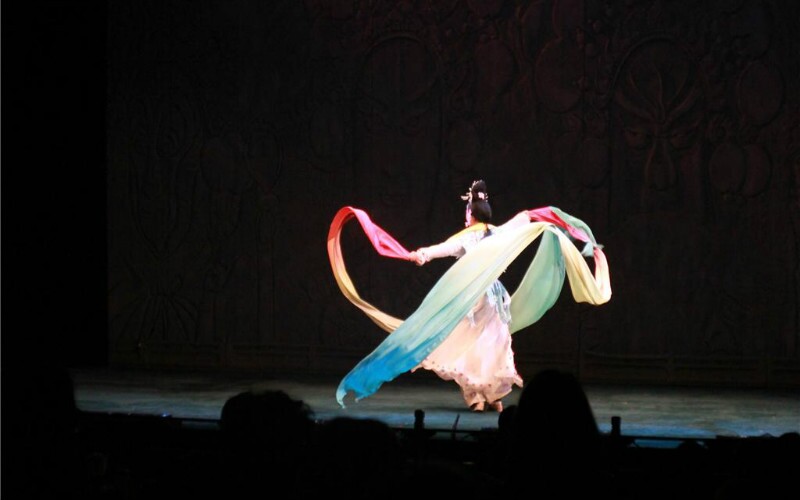 The story happened in Tang Dynasty around 745-755 AD. This is one of the masterpieces by Mei Lan-Fang. It is almost a one-person show. The story is quite simple. Mei had made this play famous by his vivid performance reflecting the concubine's disappointment, her drunken charming, and her intentional show-off of her beauty. There are many movements difficult to perform, including drinking a cup with the performer's teeth only and placing the cup on the tray by bending over backwards.

YANG Yu-Huan was Emperor Ming-Huang's favorite concubine. One evening the two had arranged to meet in a pavilion in the imperial gardens after the Emperor was off his duty. So YANG prepared a banquet and was sitting there waiting for him. But the Emperor failed to his promise and went to see one of his other beautiful concubines. The two eunuchs, Gao Li-Shi and Pei Li-Shi, who were serving YANG, informed her of her humiliating position.

Furious and depressed by the news, YANG decided to have the banquet alone and ordered the eunuchs to serve the alcoholic drink. YANG showed various stages of intoxication, her jealousy and bitterness, and her intention to forget all the unhappiness. She pretended at first that she was not drunk, but gradually was out of self-control. She scorned the eunuchs when they tried to help. She tried to stand up but was forced to lean on the table for support. When she tried to walk, her steps faltered and her legs were unsteady, and eventually had to be supported by her maids.

The two eunuchs were feeling sad and feared that she might ask for more alcoholic drinks. They felt they ought to refuse to serve more but they couldn't. To quiet YANG, the eunuchs told her that the Emperor had arrived. When she discovered that the Emperor was not coming she became angry again. She ordered one of the eunuchs to go and commanded the Emperor to drink with her. When the eunuch refused to do such she got his face slapped. Taking off the eunuch's hat she placed it on her own head and pretended to walk like a man. Then she threw it at the eunuch.

The eunuchs gradually persuaded her to return to her chambers, and she finally agreed and staggered away assisted by her maids.