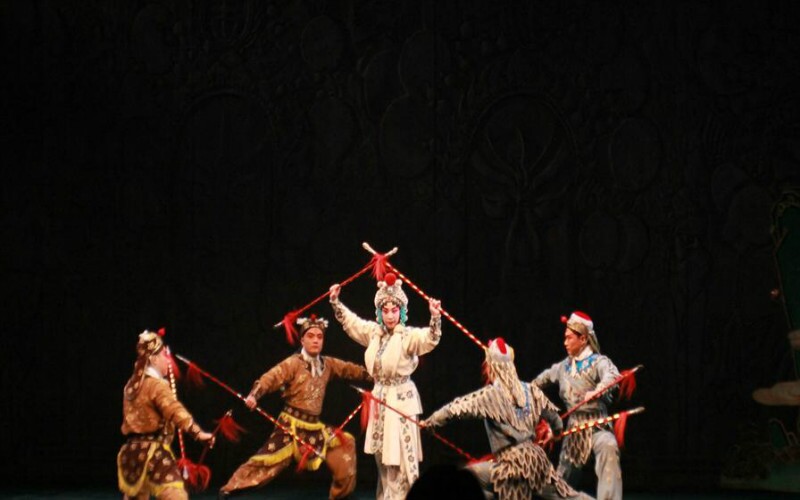 The Ruse of the Empty City

This is a traditional play. It is a very famous story from the Chinese novel The Romance of Three Kingdoms. The whole play consists of three parts: "Lost of Jie-Ting Pass", "Use of Empty City", and "Execution of Ma Su". The second part is the kernel and can also be performed alone. This is a popular play and has been performed by all famous opera masters. You will be amazed when you put those different styles together.

Lost of Jie-Ting Pass: Shu State Prime Minister Zhuge Liang ( Kong-Ming) was leading the army to fight with the state of Wei. One day, he held a meeting with his generals in West City, because SI-MA Yi and the Wei State army were coming to challenge them. Zhuge needed to send an army to defend the town of Jie-Ting. Zhuge asked which of his generals would be prepared for this mission. MA Su, a staff officer, recommended himself and pledged with his head. Rather reluctantly, Zhuge agreed but he also sent WANG Ping to assist MA Su and told them to camp the army somewhere near the water source.

When the two officers and their army arrived at Jie-Ting, they found a hill near the town. MA Su intended to camp on top of the hill as this would give him an advantage over the enemy who would be at the foot of the hill. WANG Ping reminded MA that this was contrary to their orders and argued that the army should be stationed at the foot of the hill. MA Su insisted, so the two splited the army. MA Su camped at the top of hill and WANG Ping stationed at the foot. WANG also drawed a map of the situation and had it sent to Zhuge.

West City was an important traffic center. Zhuge had plotted his plan and sent all his armies out. He just left a few old solders with him since he had thought West City was safe. When he got the map, he immediately knew that Jie-Ting would be lost soon. Once the enemy took the Pass of Jie-Ting, it would be quite easy for the enemy to take West City and other towns. He immediately sent out a messager to call General ZHAO Yun back whom he had sent to some place. Some time later the news of the lost of Jie-Ting came. SI-MA's army quickly marched on approaching West City.

Ruse of Empty City: Zhuge was in a very embarrassing situation. SI-MA's army was reported being nearer and nearer and his support was still far away. There was only one option for Zhuge to take, the use of empty city. Zhuge assembled his manpowers in West City. He told them to open the city gates wide and send them to clean the roads. The old men were puzzled but Zhuge told them not to worry and he had secretly distributed many many solders around to fight the upcoming battle. Zhuge himself went up the city wall with two of his service boys and began to play his favorite music there.

SI-MA's army had been informed that West City was empty. But when they came to the city, they got confused and dared not to enter the city. SI-MA could not make his mind from what he had just seen: a leisure Zhuge, a widely open gate, empty roads with only a few old solders as the dustmen. Zhuge told them that the city was empty and he had prepared to welcome the enemy. SI-MA was determined that there was a trap for his army since Zhuge had never in his life taken any risking plans. He replied Zhuge that no matter whether the city was empty or not, he was not to enter. SI-MA's army camped miles away outside West City.

General ZHAO Yun returned West City. The happy Zhuge sent Zhao to attack the enemy and he immediately retreated back to his State. SIMA was again informed by his spies that West City was empty. When he marched for the second time towards West City, he encountered ZHAO Yun and was defeated. When he finally learnt what had happened, he realized about his weakness, and withdrew his army from that area.

Execution of MA Su: MA Su and WANG Ping flee back to ShuState. WANG was brought in front of Zhuge. Zhuge critisized WANG for not obeying the command and punished him with a slashing. When MA Su was brought in front of Zhuge. Zhuge reminded him of his pledge and MA Su said he would take the consequences. Zhuge, with tears in his eyes, reminded him of his past misdeeds, and assured him that MA's family would be well cared after his execution. As MA was being executed, Zhuge began to cry. One of his general asked him whether he regretted about the execution, Zhuge replied no. He just remembered that the Late Emperor once told him that MA Su should not be relied upon, as his words often exceed his ability.