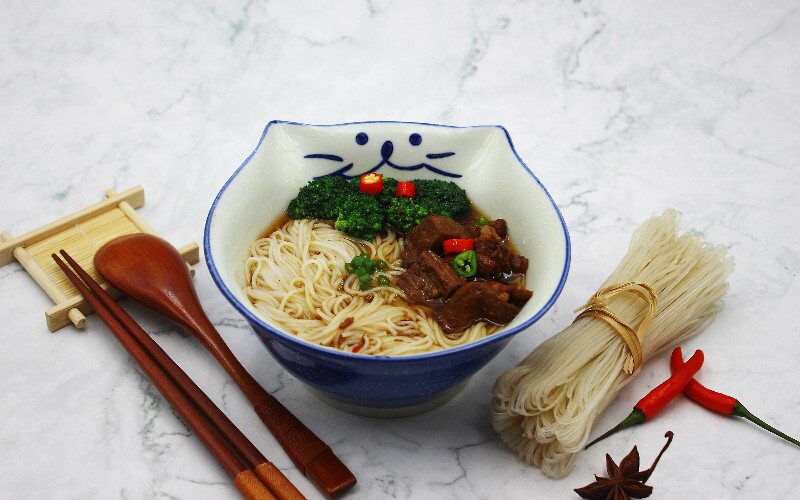 "Chinese food" is the most popular food in the world, but authentic Chinese food has many differences with Western food! Here are 15 or so more facts to educate and shock you.

1. World's Biggest Variety of Flavors - It's Not All the Same!

Did you know that Chinese food has 5 Key Flavors that must be balanced according to Traditional Chinese Medicine - sweet, sour, salty, bitter, and spicy?

In the south, Chinese eat bowls of rice or rice noodles with almost every meal (as well as far greater varieties of fruit and veg), and only occasionally eat wheat.

3. Chinese Eat Almost Everything That Moves!

Various vegetables in a market

Chinese eat far more fruit/vegetables than in the West - about twice as much dietary fiber… resulting in bowel movements twice the size of Western ones! Read more on China's Top 10 Vegetables.

Crazy variety is not limited to China's "meats"… Many of China's vegetables and fruit you won't have seen or heard of before, like pomeloes, bitter cucumber, yard-long yams, tree fungi, and dozens of untranslatable weed-like plants.

6. It Must be Fresh in China - Canned/Frozen Food Spurned

Wet markets (where live/freshly-butchered animals and freshly picked foods are sold) abound in China - almost one per city block. Many Chinese go every day. Fridge freezers are catching on, but fresh veg is still a must. Tins are despised.

Also, according to Chinese medicine food must be eaten in season to combat too much yin (cold weather) and yang (hot weather), dryness, or dampness. E.g. huge white radishes (with high yang) are very popular in winter.

Chinese don't like waste, so whole animals are often served. E.g. fish are not filleted, just gutted, with head and bones intact. Sometimes bones are soft enough to chew up; sometimes they must be de-mouthed (onto a side plate).

Chinese believe meat near the bones is the best, and that marrow is very nutritious, so bones are deliberately chopped to splinters to release the marrow - watch out while eating. Bone broth is popular.

Chinese don't eat with knives and forks, traditionally, which is seen as violent or barbaric, but with chopsticks. As chopsticks don't actually chop, all food is very soft or chopped up into bite-size pieces before cooking.

That's an unremarkable average of 2 or 3 pairs a month for its approaching 1.4 billion population. The government has imposed a disposable chopstick tax to reduce usage.

Most (disposable) chopsticks are softwood or bamboo, so that's about 100 square miles or the area of Queens of trees/bamboo… or 50,000 tonnes - imagine trucks of chopsticks lined up end-to-end for 30 miles.

10. The Same Thing Can Be Cooked a Dozen Ways

Like Bubba's shrimp in Forest Gump, there are many ways to cook Chinese food. For example, a fish could be steamed, boiled, stewed, quick-fried, stir-fried, deep-fried, roasted, sautéed, marinated in brine, pickled in vinegar, soy-sauced, or sweet-and-sour-sauced.

11. Food Decoration Can Verge on the Ridiculous

A fish dish is decorated with cucumber slices and red peppers.

Chinese chefs, particularly Jiangsu cuisine experts, go overboard on presentation. They believe "the first bite is with the eyes". Dishes are served in precise patterns or lifelike shapes, brightened by intricate vegetable carvings and decorative herbs.

12. Dish Names Can Be Misleading

Chinese like to give to dishes catchy names. Some names have nothing to do with their ingredients. For example:

Remember, a 'field chicken' (田鸡 tiánjī) is a frog! A tour guide or translator will help you avoid surprises. We offer our services below.

Chinese attach particular meanings to certain foods based on shapes, colors, pronunciations, and legends. Superstition and tradition dictate certain foods must be eaten for certain festivals/events to invoke a blessing.

For example, ingot-shaped dumplings mean wealth at New Year, and round mooncakes represent family reunion at Mid-Autumn. See The Symbolism of Chinese Foods.

In traditional Chinese meals, dishes are shared communally. Dishes are served in the middle of a table, and people sit with their rice bowls around it.

In restaurants, especially for tables seating 10 or 12, there are usually lazy Susan turntables to permit easy sharing among diners. See What Restaurants Are Like in China.

The honored guest is customarily seated furthest from the door with the fish, chicken, duck… heads pointing his way.

If you want to experience authentic Chinese food culture on a China tour, and avoid the pitfalls, China Highlights can help you!

Or you can contact us and we can tailor-make a Chinese food tour for you based on your needs and wants.