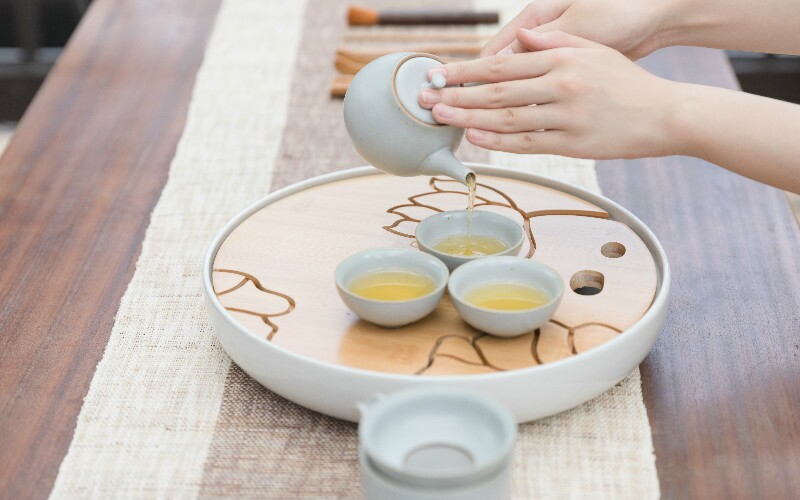 8 Types Green Tea You Should Not Miss

Tea is one of the essential parts of Chinese people's lives. The custom of drinking tea dates back to the third millennium BC in China and green tea is the most popular type of tea there.

It has been proven that the day assumption of green tea have many health effects including reduce risk of cardiovascular disease, loose weigh and anti-aging.

Here are eight high-quality teas with a high reputation in China. Most of the teas are named after their original producing areas.

Dragon Well tea, also known as Longjing tea, is the most famous green tea in China and is renowned around the world. It enjoys a high reputation for the sake of its gentle flavor and pleasing aroma.

There are various types of Dragon Well tea in China, but the authentic Dragon Well tea is the one where the tea is grown within the West Lake area in Hangzhou. Shi Feng(Lion Peak), Longjing, Wuyun Mountain, Hupao and Meijiawu are recognized as the five finest producing regions.

The name Biluochun literally means "Green Snail Spring". It is cropped during the spring equinox and "grain rain" period (according to the 24 solar terms), and it has a curled shape resembling a snail. It has a strong aroma and fruity taste.

Huangshan Maofeng tea (literally meaning "Yellow Mountain Fur Peak") originates from the Yellow Mountain in Anhui Province. It has been famous since the Guangxu Emperor's reign during the Qing Dynasty (1644-1911), and it's picked in the early spring. It has peak-shaped leaves with ivory-tinted hairs, and its golden tea is slightly sweet and fragrant with a lingering aftertaste.

Taiping houkui literally means "monkey leader" in Taiping Prefecture (now the Huangshan area). It has a straight shape just like a bamboo leaf which is rare among tea and its leaves are larger than other types.

Lu'an Melon Seed tea was a type of tribute tea for the imperial family during the Qing Dynasty. The Guangxu Emperor (1871-1908) and Empress Dowager Cixi were very fond of it.

Lu'an Melon Seed tea also has a very high nutritional value. It was widely used to prevent sunstroke by the Chinese during the Ming Dynasty (1368-1644).

Maojian (毛尖"hairy tips") is a special type of tea. "Hairy" refers to the "tiny fuzz in cup" when it's brewed, while "tips" refers to the shape of the sharp, full, and young tea leaves.

Compared to other types of tea, Xinyang Maojian leaves are relatively small, being well-known since the late Qing Dynasty, with a green color, white hairs, and a thin and firmly rolled appearance with both ends in a pointed shape.

Listed as a tribute tea in the Song Dynasty(960-1279), Yunwu ("cloud mist") tea is grown on Lushan Mountain, Jiangxi Province. It is famous all over China owing to its origin on Lushan Mountain, and it's characterized by its tender leaves, jade green luster, clear tea and sweet flavor.

Nanjing Rain Flower Tea is a special type of green tea, which was named after the area it's grown in: Yuhua tai, Nanjing City. It is also known in Chinese as Yu Hua Cha which is a local product of Nanjing.

Nanjing Rain Flower tea leaves are processed with great care and have a delicate appearance with a pine needle shape. It has a light, smooth, and sweet flowery taste and has received a high reputation in Southeast Asia so that people consider it to be the perfect gift.

According to the Chinese tea ceremony tradition, green tea should be infused three times, and each infusion has its own points for attention.

The First Infusion of Green Tea — Fresh and Fragrant

Attention should be paid to the leaves dancing in the boiling water during the first infusion of tea. Drink it slowly in small sips to taste its fresh and fragrant flavor.

The second infusion of tea has a much stronger flavor and a lingering fragrance, which makes you feel fresh and joyous, and you're supposed to concentrate your attention on its flavor.

The Third Infusion of Green Tea — a Lighter Tea to Finish

When half of the second infusion of tea is left, add the third infusion to the fair cup.

It has not been proven that daily consumption of green tea has any health benefits, though it is statistically associated with lessened risk of cardiovascular disease, stroke, and death from any cause. However, this may be linked more with the less-stressed lifestyle and increased water consumption of habitual green tea drinkers, compared to non-green-tea-drinkers, than the tea itself.

Green tea makes up over 50% of China's tea market share. In TCM it has a high medicinal value and is, therefore, used as both a beverage and a medicine in China.

Or just tell us your interests and requirements and we will help you to create your own tea culture tour.