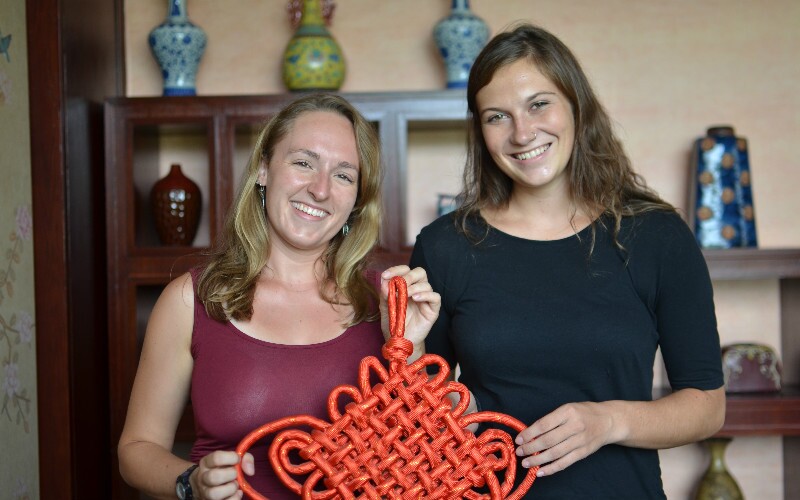 Can knots be a form of art? It is in China. There is a long history of using knots for decoration on clothing or to hang from the ceiling or on a wall. Skilled knot artists weave complex knots that you might see sold as souvenirs that you can take back with you. They have a long history and a symbolic meaning even today.

What Is a Chinese Knot?

A Chinese knot is a knot that is tied and woven from a single length of cord or rope to be a variety of shapes and of varying complexity. Each shape has its own symbolic meaning, and nowadays you can find them as decoration, gifts for special occasions, and adornments on clothes.

Most knots are double layered and symmetrical and have two cords entering the knot from the top and two leaving from the bottom. Each kind of knot is named after its shape or the symbolic meaning that it carries.

Knot weavers can use a variety of colors, but they usually weave deep red ones as in the picture above. The color red signifies good fortune.

People may have originally made them to record information and convey messages before people started to write. One hundred thousand year old tools have been discovered that were probably used to tie and untie knots, and there is a reference to knots in ancient literature. But it isn't known when they first started to be used symbolically or woven for art.

It is known that there were used for artistic decoration and to symbolize and express thoughts and feelings in the Tang Dynasty era (618-907). The Tang Empire was a large one that covered most of regions of modern China, and the traditional art form was carried on by succeeding generations as part of their culture.

Ancient and Modern Use of Artistic Knots

Even today, Chinese knots are rich in symbolic meaning, and they therefore hold sentimental value when given as gifts or passed down through families.

For example, in ancient times and even now, lovers may give a knot as a token of their love. The 'true love knot' and the 'double happiness knot' are given or used at weddings to express mutual love and growing old together in fidelity. Knots connoted love and marriage in Chinese culture.

This connotation can even be seen in Chinese words. The Chinese word for 'rope' is 'shèng' that sounds similar to the words for 'spirit,' 'divine,' and 'life.' Knots had a spiritual meaning and were used for worship.

The word for 'knot' itself is 'jié' and is related to many other terms that reinforce the symbolic meaning of the knots. For example, 'tuán jié' which means 'to unite,' 'jié hūn' means 'to marry,' and 'jié guŏ' means 'bear fruit,' 'result,' or 'outcome.' So a knot given to a marriage partner or a couple means all these things and having children as well.

Along with being symbolic gifts or messages, knots are still used if they wear traditional Chinese clothing or as good luck charms. They are a means of fastening traditional garments instead of buttons or wooden pegs. Now, silk is most widely used to make these clothing knots.

They are used as jewelry such as even rings, earrings, bracelets, and necklaces. They are sold as handicraft novelty items too.

Take a Chinese knot home with you.

There are tourist shopping streets and retail markets where you can find artistic knots in various cities. Let us help you go to them.

We also offer a Traditional Chinese Handicraft Tour in Beijing where you may enjoy making the artwork and handicrafts you enjoy. Tell us you want to concentrate on knot making, and we'll try to arrange that.