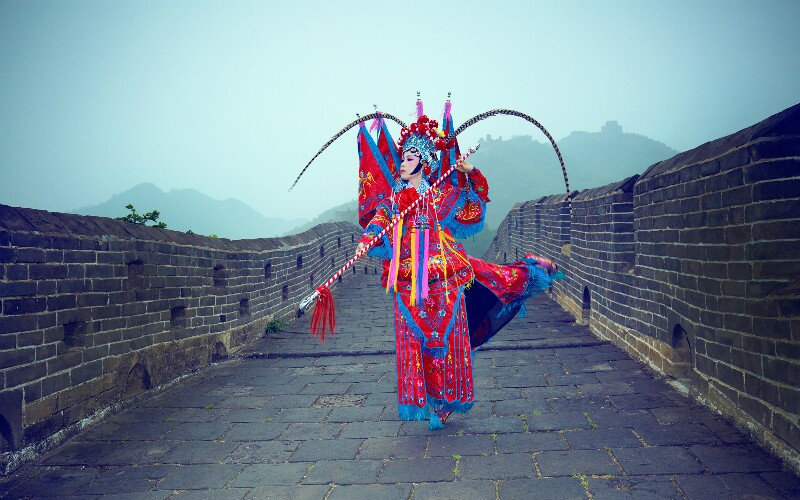 With almost two-hundred-year history, Beijing Opera is one of the most influential Han operas in China, and the quintessence of Chinese culture. It was listed into Unesco Intangible Cultural Heritage of Humanity List in 2010.

The History & Development of Beijing Opera

Beijing Opera developed from Anhui province travelling troupes, but is popular all over China now.

Because Beijing Opera entered the Imperial Court at an early stage, its development is different from other operas in that it is required to contain a broader theme, create more character types, and at the same time, tone down the Anhui style.

Costumes and Makeup of Beijing Opera

The facial makeup uses a special method which emphasizes characteristics, whilst being an art form in itself, combining spiritual and artistic expression. Usually bat's, swallow's, or butterfly's' wings are painted on eyebrows, eyes and cheeks, and nose and mouth are exaggerated to portray facial expressions.

The costumes of Beijing Opera have strong Chinese characteristics, and from the styles, audiences can identify the characters. The styles are divided into Dayi, Eryi, Sanyi and Yunjian.

The Music of Beijing Opera

The Woman Prisoner tells a story from the Ming Dynasty (1368-1644), a woman named Su San being wrongly accused for killing her husband.

In this aria, on the way to the execution site she complains of her wrong treatment to an old man named Chonggong, whose duty is to escort the prisoners, and he consoles her.

Rapper Face is an opera that cleverly combines traditional Beijing opera singing and rhythm with pop music, making it easy to sing.

Henan Opera is the biggest regional opera in China, popular mainly in the Yellow River Basin and the Huai River Basin in central China.

Henan Opera can be divided into two styles: One mainly consists of singing and some dialogues with orchestral music; while the other focuses on acrobatic fighting with percussion music as accompaniment.

Costumes and Makeup of Henan Opera

Nowadays, the costumes of Henan Opera are similar to that of Beijing opera, and the actors also paint their faces.

The Music of Henan Opera

Henan Opera is famous for its singing style: the rhythm is distinctive and the lyrics are extremely colloquial. Every script describes a funny story or a legend, with scenes from the common people’s life.

Now, some western instruments like violin, viola, cello, or even electronic organ can be used as well.

Hua Mulan was a legendary brave girl in the Southern and Northern Dynasties Period (AD 420-AD 589). This song praises Hua Mulan's saga of disguising herself as a man and joining the army in place of her father.

This style was formerly known as the Tea Picking Tune, and originated in Huangmei County, Hubei province. The themes are folk stories and legends, and it is popular with audiences for its liveliness and fresh regional style.

Costumes and Makeup of Huangmei Opera

The Music of Huangmei Opera

Huangmei Opera is famous for its natural and elegant style, simple and delicate singing and dancing make the characters lively and real.

The Emperor's Female Son-in-Law tells a story of Feng Suzhen, who in order to avoid marrying a man she did not love, instead of her imprisoned betrothed, disguised as a man and took the imperial examination, achieving the best score.

Impressed, the Emperor betrothed his daughter to Feng, but on their wedding night Feng confessed the situation to her. After many twists in the story in the end Feng was saved, and married her fiancé.

Luoyi, a sirdar in the Sui dynasty (581-618), bids farewell to his wife Jiang Guizhi because of the turmoil in the society. After several decades, Jiang Guizhi comes to find her husband from a great distance, and in the end, they recognize each other through a competition in martial skills.

The Heavenly Maid and the Mortal夫妻双双把家还

The Heavenly Maid and the Mortal tells a love story of Dongyong and the Jade Emperor's seventh daughter.

Dongyong sold himself to slavery in order to be able to bury his father, which moved the Jade Emperor’s seventh daughter (also called the Seven Fairies). She descended to earth without permission, and married Dongyong under a locust tree.

She helps Dong Yong to pay off his debt, shortening his slavery to 100 days. Before the couple can begin their life together, the Jade Emperor forces Seven Fairies to go back to heaven, so the couple have to part.

They are allowed to reunite only once a year, at the 七夕 (the 7th evening) - later known as the traditional Chinese Qixi, or Chinese Valentines Day.

Yue Opera is the second largest opera in China. In its heyday, there were many professional troupes in several areas of the country, but now it is mainly popular in Zhejiang, Shanghai, Jiangsu, Fujian, and other South Yangtze River areas.

The themes of Yue Opera have diverse styles and various formats, which results in change in the performance form.

Costumes and Makeup of Yue Opera

The Yue Opera uses silks and satins as clothing materials, for their soft texture. Elegant, plain colors, and Mangpao (a kind of an embroidered robe with python as the pattern) are commonly used.

The Yue Opera tends to use soft and natural make up, and the beautifying and painting methods make the characters look more vivid.

The Music of Yue Opera

The singing technique has its unique style, emphasizing tone of voice and the way words are sung.

Sister Lin Falls from the Sky is a famous ballad from one of China's four great classic operas: A Dream of Red Mansion.

It tells a love story of maid Lin Daiyu, who first meets Jia Baoyu just coming back from fulfilling a promise in the temple. The ballad describes their impressions of each other.

Bid Farewell in Eighteen Miles is a classic ballad of Liang Shanbo and Zhu Yingtai (also called The Eastern Romeo and Juliet or Butterfly Lovers).

It tells a story of Zhu Yingtai, disguising as a man to go to a private school, and making friends with Liang Shanbo, eventually falling in love with him. This aria expresses their love, and the feeling of being reluctant to part, as one sees the other off on the eighteen miles road.

Cantonese Opera, originated in Foshan, is one of the local operas in Guangdong, as well as a Chinese Han opera. It is widespread in Guangdong, Guangxi, Hong Kong and Macao regions.

As many Cantonese people have moved overseas from generation to generation, Cantonese Opera has become the world's most widely known Chinese Opera style.

The themes of Cantonese opera are mostly adapted from classic novels, legends, folk literature, and local anecdotes, even from foreign novels or operas, which creates a rich content in the plays, and makes people love it so much.

Costumes and Makeup of Cantonese Opera

The costumes of Cantonese Opera are made of silks and satins in bright colors. There are symbolic meanings to these colors; for example yellow stands for respect, red for integrity, black for straightforwardness, white for graveness, and so on.

The Music of Cantonese Opera

Parted Couple is a popular classical Cantonese duet; it describes the miserable feeling when lovers are apart.