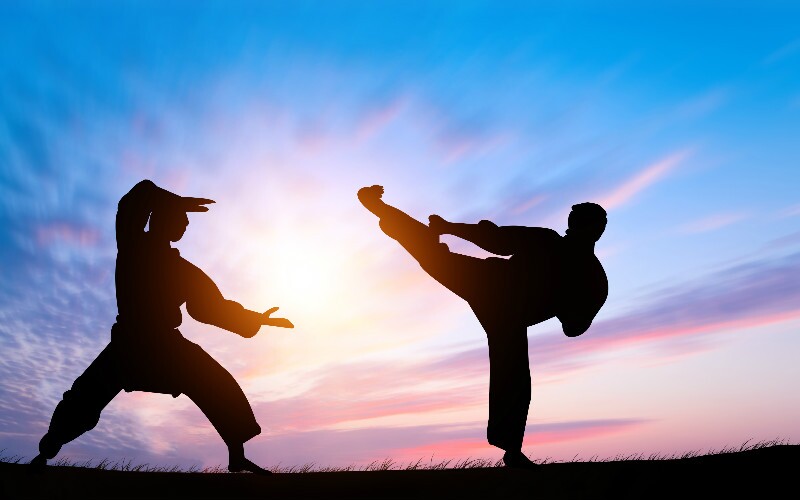 Shaolin Kung Fu is only one of several types of Chinese Kung Fu, or "hard-won achievement", "martial arts". It is only one among many such martial arts that claim association with Shaolin Temple, the now famous Chan ("Zen", in Japanese) Buddhist temple located near the city of Zhengzhou, in China's Henan Province.

Shaolin temple, which was founded in the 5th century CE, became famous in fact due to its assocation with the martial arts, in particular, with the strain of martial arts that was referred to as "external" (shaolin) martial arts (as opposed to "internal" (wudang) martial arts, the distinction being a sort of hair-splitting argument within the martial arts community in China at the time regarding whether the focus should be on mastering only the physical techniques associated with martial arts or mastering these in connection with mastering one's own particular abilities, or 'getting in touch with one's qi', or life force, as it were, in a "mind over matter" sense).

How Shaolin Kung Fu Became Famous in the West?

Kung Fu martial arts became famous worldwide (shown everywhere that syndicated US TV shows were broadcast), after the US television series of the same name, starring the US actor, David Carradine, was launched. The TV series was set in the US' Old West, a place characterized by the most un-subtle displays of power (think of a free-for-all bar fight in a typical western movie), while David Carradine, in the role of the Shaolin monk, Kwai Chang Caine, was the epitome of a polite, unassuming (read: subtle) figure who, as a master of kung fu, was also capable of amazing, mind over matter power displays, but resorted to this only when there was no alternative (there is perhaps a large measure of truth in portraying the Old West in the US as the "Wild West").

In spite of ostensibly being a master of "external" (shaolin) martial arts, Kwai Chang Caine turned out to be more of a master of "internal" (wudang) martial arts, which is also what gave the series in general – and David Carradine in particular – rave reviews, as Kwai Chang Caine's respectful self-restaint contrasted so sharply with the typical loudmouthed, bar-brawling cowboy's total lack of self-restraint. Kung Fu martial arts has since become even more famous due to the many video games devoted to its practice.

Another famous figure that made tremendous contribution in spreading Kung Fu in the west is Bruce Lee (1940 - 1973), the famous Chinese-American martial artist and actor. He is considered by many as the most influential martial artist and an important cultural icon of the 20th century. His films include the Big Boss, Fist of Fury, Way of the Dragon, Enter the Dragon, and the Game of Death.

Shaolin monks continued to practice Shaolin Kungfu while other forms of martial arts were forbidden during late Qing Dynasty.

During the reign (1722-1735) of Emperor Yongzheng of the Qing Dynasty (1644-1911), the practice of all forms of martial arts was forbidden. Shaolin Temple, however, is said to have continued the practice of wushu in secret, and even helped to organize the continued teaching and practice of wushu throughout the country. In any case, after the fall of China's last Imperial dynasty, wushu blossomed, and Shaolin Temple could again openly teach it (banning an activity, paradoxically, seems to be one of the best ways to spark interest in it, as the prohibition of alcoholic beverages in the US from 1919-1933 proved!). Martial arts was again banned during China's Cultural Revolution (1966-76), but quickly bounced back afterward.

Shaolin Temple teaches about a dozen or so different varieties of kung fu related wushu, among them a discipline that is akin to what is called kickboxing today (the term "kickboxing" was invented by a Japanese martial arts promoter of recent times). However, sanshou – or sanda as the discipline is called in China today – can best be described as "free fighting", which, although it may seem to imply "anything goes", has a number of restrictions as well as being composed of a number of fixed elements. In fact, sanda is taught together with taolu ("forms"), the latter of which refers to a series of specific movements, depending on the attacker's approach, designed to repulse the attack and then to overpower the attacker.

There are four main elements of sanda: ti (kicks), da (punches), shuai jiao (mainly throws today, but also grappling designed to block attacks or to apply pressure to key arteries or nerves, though shuai jiao was originally a form of head-butting with a horn-like device attached to one's head, imitative of duels between male horned animals during the mating season, and which duels often involved throwing the opponent, or knocking him off balance, with a flick of the head and with the front feet firmly anchored), and chin na (catching and locking an opponent's joints, a technique seen in traditional Western forms of wrestling). Note that the kicks and punches of sanda are not intended to "draw blood" (break jaws and noses), but are aimed instead at vital areas of the body which, when properly struck, can incapacitate the opponent without necessarily resulting in bodily harm, though, where required, they can – as in other forms of wushu – even provoke death.

The essence of taolu is to study and practice a series of specific movements, based on the actions of one's opponent, beginning first with the response to the opponent's initial approach. After this, any number of sequences might follow, and the sanda-taolu fighter must adapt to these. This therefore requires careful study of the various possible "moves" (think of a chess game) of one's opponent, so that one is prepared for the appropriate response to any eventuality. This, however, is the easy part, for all these responses – defensive as well as offensive moves – must be coordinated so as to flow together in a single, fluid movement. This means that the sanda-taolu fighter must constantly be aware of precisely where in this duel he finds himself and instantaneously and fluidly execute the appropriate next move, be it a locking movement, a throw, a kick or a punch.

One of the primary reasons for learning taolu together with sanda (it is not unreasonable to imagine, in this connection, the inseparability of the yin and the yang) was partly to keep the old techiques, or forms, alive (the Chinese is a very tradition-bound culture), and partly to prevent a strictly sanda-oriented free style form of fighting from degenerating into formlessness, or "anything goes" (alas, much of the kickboxing one sees today is of the latter variety). Thus sanda-taolu, as it is practiced by a genuine Shaolin master, is a very compact sport that makes the most of a minimum of space, or, as a Westerner might be tempted to say of the way sanda-taolu is practiced: less is more. Which pretty much sums up the philosophy of Kwai Chang Caine, the Shaolin monk in the Kung Fu TV series.