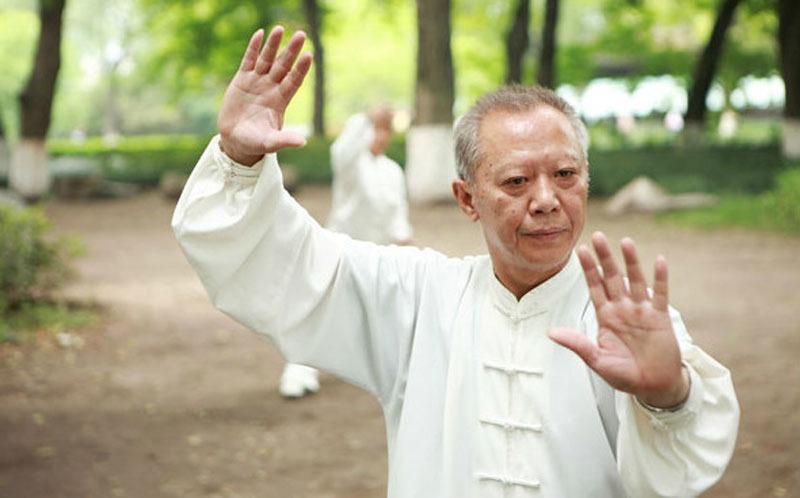 The ancient art of Tai Chi is practiced by people of all ages in China. If you're passionate about Tai Chi or just curious, a trip to China is one way to explore the modern practice as well as the historical roots. From grandparents in the city park to Taoist believers at ancient temples, Tai Chi can be seen in all facets of Chinese life.

What is Tai Chi?

Tai Chi is an "internal" martial art in contrast to the "external" Chinese martial arts, like Chinese Kung Fu.

Due to the widespread popularity of the martial arts, or wushu, most of us in the West are probably more familiar with the physical wushu rather than the internally focused aspects, like Tai Chi.

Some practitioners, especially those with an interest in Taoism, liken the art to the yin-yang symbol as it relates to the internal versus the external forms of wushu. The yin ('dark, cold') and the yang ('bright, hot') – the point being that the two were in fact intertwined, or 'two sides of the same coin', as is suggested by the yin-yang symbol itself.

The Origin of Tai Chi

Locals practice Tai Chi along the banks of a lake.

Historians debate when Tai Chi was first practiced with a range of somewhere between the 12th and 17th centuries. According to one legend, a Taoist immortal by the name of Zhang San-feng (Chang San-feng) was inspired to develop the discipline while witnessing a duel between a cobra and an eagle.

Zhang San-feng was impressed by the defensive tactics deployed by the snake. By controlling its fear and maintaining total concentration on the eagle's lunges, the cobra managed to avoid being hit by the eagle's deadly pecks and deliver a fatal blow to the eagle's neck, killing it.

Other theories hold that the discipline was simply developed over many centuries as a result of the discipline of many kung fu masters. Whichever explanation is the most likely, Tai Chi has certainly left its mark on China's past and present.

Academia International of Taichi of Chenjiagou (the Chen School of Taichi)

There are five traditional schools of Tai Chi: Chen, Yang, Wu Hao, Wu and Sun. These are named after the families who made them popular. Each has a following in China and is known by their historical lineage as tied to the families they are named after.

Nowadays, we are seeing many hybrid styles and new interpretations arising not only in China but all over the world as Tai Chi grows in popularity.

The health benefits of Tai Chi are very common motivators. Clinical studies suggest that the practice of Tai Chi can lower blood pressure, reduce nervous tension, and benefit the immune system. It is also reported to improve the digestive, cardiovascular and respiratory systems. Practitioners also report an increased sense of self-confidence from practicing the sport. Today, there are over 100 million happy devotees who practice Tai Chi on a regular basis.

Explore the art of Tai Chi in various cities around China as you complete your tour. We will work with you to create custom itineraries to include your desired destinations.

Temple of Heaven Park in Beijing

Mass Taichi at the Temple of Heaven

This park located in Beijing is the perfect spot to enjoy Tai Chi in a relaxed, public space. Join the locals in their daily practice or just observe from afar.

In Chengdu, the People's Park is the ideal location for people watching and learning about the day-to-day lives of regular Tai Chi practitioners. Head to the large squares or under the trees to find locals finding peace in the urban setting through their Tai Chi practice.

High above Victoria Bay, Victoria Park is a popular location for views of the city. It's also a popular spot for observing the local practice of Tai Chi.

This historic mountain in Shandong is said to be the birthplace of Taoism. It's home to several temples that are still important bastions of the Taoist faith where the disciplines of Tai Chi and Kung Fu can still be observed.

The four mountains are arranged in each of the four directions on the map. They are important pilgrimage sites for Taoists and are each home to temples devoted to the Taoist arts. Qingcheng, one of the four famous mountains, is also the home of the beloved Kung Fu Panda!

Attend a Tai Chi Class Where It All Began

If you're interested in learning from the best, consider enrolling in a Tai Chi course on your journey through China.

Learn the correct posture and experience the serenity of practicing Tai Chi in picturesque Yangshuo, China. Schedule your class today!

Come learn Tai Chi in the place where it all began.

During your Beijing trip take some time to learn the ancient art of Tai Chi and even Kung Fu from local professionals. Schedule your Beijing Tai Chi course with us today!

Visit China and Explore the Ancient Art of Tai Chi

Let China Highlights show you the roots of Tai Chi with our popular tours of favorite locations or our custom tours designed just for your unique needs.