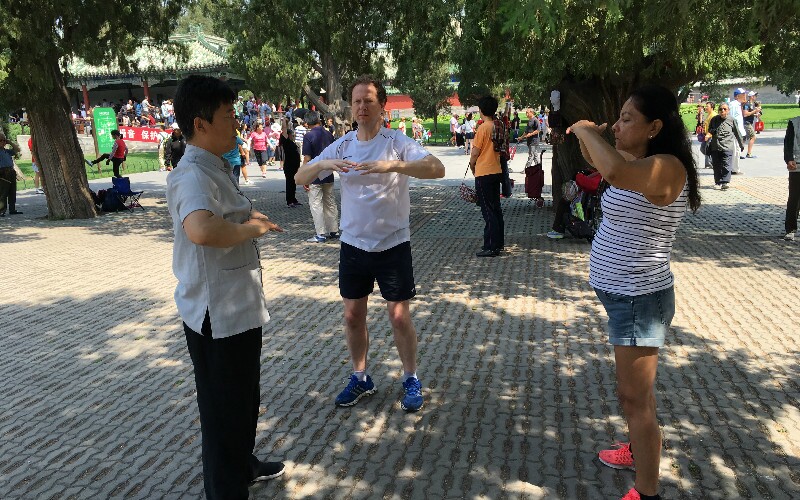 It is said that a healthy body has ample and free flowing "qi" with the appropriate amount and quality of qi at each part of the body and each organ. It is thought that qi is the energy flowing throughout the Universe.

It is thought that when qi is abundant and flowing smoothly the body is healthy and strong. Qigong is exercise to help accumulate qi and cause it to flow smoothly around the body. Here is information about the history, philosophy, practice and practical benefits of qigong.

The idea of Qi is very old, being one of the foundational axioms of Daoist philosophy and religion. For thousands of years, important traditional medicine texts have described qi and the ways to manipulate it to improve health and strengthen the body.

Two thousand years ago, important texts described three major ways to help the circulation and accumulation of this qi.

Many Kinds of Qigong

There are hundreds of varieties of qigong exercise. Hundreds of techniques have been developed in East Asian countries, and many new modern forms are developing.

Qigong is used mostly for improving health. But it can also be used for martial arts. In the martial arts, it is used to attack an opponent.

One of Many Ways to Move Qi

Qigong practitioners generally believe that qigong is an internal practice of physical exercise and mental meditation techniques to manipulate qi. But they usually practice external methods for added benefit also.

The external methods are herbal and medicinal methods and body manipulation along the channels in a variety of ways, such as moxibustion, cupping, massage, acupressure, and acupuncture.

It is thought the there are about 12 channels or "meridians" in which qi, something that is insubstantial, flows. The qi isn't only insubstantial, but many think that the qi can't be experienced directly as one would be able to detect a physical energy.

The qi flows along the channels (meridians) through organs to the limbs and head. Along with the major 12 meridians, there may be perhaps countless tiny tributaries connecting the major meridians and reaching the skin.

A Type of Common Medicinal Practice

Qigong is actually a type of Chinese medicinal practice. Qigong exercise is an internal exercise routine to move the qi around in the body and learn to control the qi.

It is thought that when the qi is low, stagnant at some point or blocked at a point in the body, sickness and physical weakness occurs.

Qigong is a philosophy of physical and meditative routines, and the tai chi exercise people practice in the parks can be considered a type of qigong too. Tai chi is the application for self-defense and martial arts of qigong exercise and philosophy.

Hundreds of millions of people practice some type of qigong or tai chi, and it is a common exercise you'll see practiced in parks or outdoors in china especially in the mornings.

It may surprise you, but qigong routines are thought to not only improve health and cure diseases, but to extend the life span. In a way, this logically follows from the idea of qigong, since if people can continuously cure their diseases or bodily injuries by qigong, they'll not die.

Most Daoist believers believe that there are many people in China who are actually hundreds of years old through the practice of qigong or by taking a special herb or medicine.They worship these people and consider them deities. They are called immortals.

You can find dozens of different techniques and routines of qigong. Some are as simple as controlling breathing and meditation or doing small repetitive motions with the body.

Qigong and tai chi practitioners generally say that the exercises calm them and help them to feel better and "more energized". They say that they feel more energetic after a period of exercise than before they started.

The rhythmic motions tone the muscles and might help to improve balance and stamina. People learn to control their limbs and body better, and the crouching stances in many of the more physical styles help to develop stronger legs. It can be used for martial arts training.

There isn't a medical consensus among scientists about its healing virtues or life-extending effects. There isn't a consensus about the claims of practitioners to control objects or people away from their bodies by qi either.