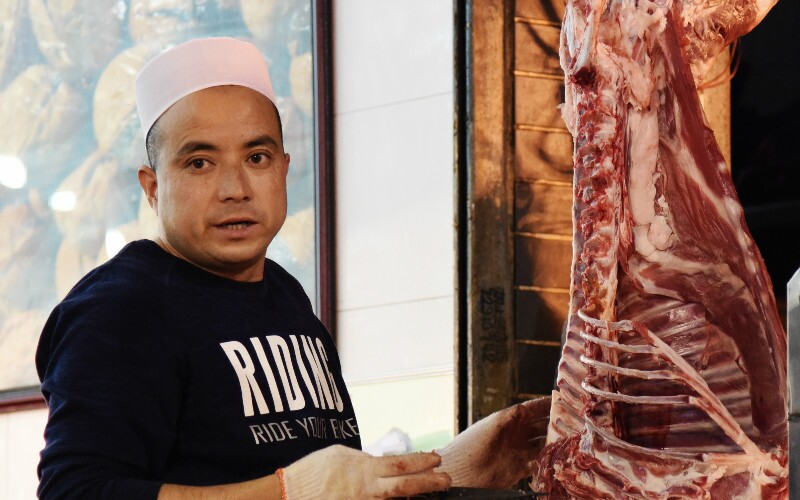 The Hui ethnic group is China's most widely distributed ethnic minority, with a sizeable population of 9.8 million. Most Hui people live in the Ningxia Hui Autonomous Region in northwestern China, but there are many Hui communities in Gansu, Xinjiang, Qinghai, Hebei, Henan, Yunnan, and Shandong Provinces.

Chinese is the shared language of the Hui people. They also use some Arabic and Farsi words in daily interactions and religious activities. Those Hui living in the border areas of China often use the languages of local ethnic minorities.

The distribution of the Hui people is characterized by small-scale concentration with wide dispersion. They generally observe the Islamic religion, which has a profound influence on their daily lives. Large Hui communities usually build a mosque, which becomes a distinctive architectural feature for them.

Hui is an abbreviation for the Huihui nationality. Its ancestors were people who migrated to eastern China after three invasions by Mongols in the 13th century, along with Muslim immigrants residing in the coastal areas of southeast China during the Tang (618–907 AD) and Song (960–1276 AD) dynasties.

Through prolonged association (including intermarriage) with many other nationalities over the course of history, the Hui gradually assimilated the customs and living habits of the Han, Mongols, and Uygur, and developed their own unique Huihui identity.

Since the Hui are widely distributed throughout China, their diets have developed in different ways. We can generally conclude, however, that their eating habits have the following three features.

First, they prefer wheat-based to rice-based food. Noodles are a staple, and various dishes are made of wheat flour.

Third, in keeping with Islam, beef and mutton are prevalent, while it is forbidden to eat the meat of pigs, dogs, horses, donkeys, mules, and beasts of prey.

The Hui people are particular about beverage. They only drink water from a flowing or clean source. It is unacceptable for people to take a bath, wash clothes or pour dirty water around sources of drinking water.

The people also like to drink tea and use it as a treat for guests. Read more about Halal Food in China.

Hui clothing exhibits a deep Islamic influence. Men usually wear Hui-style hats, which are small, black or white, and without brims; most Hui men like to wear white ones.

Some do not wear hats but instead wrap their heads with white towels or a cloth. Others wear pentagonal, hexangular or octagonal hats, according to their own branch of Islam and the place where they live.

They like to wear double-breasted white shirts, and some even like to wear white trousers and socks, making them look tidy, bright, and solemn.

Normally, young girls wear green veils with golden edges, and simple, elegant, embroidered patterns of flowers and grass. Married women wear black veils that cover them from head to shoulder. Elderly women wear white ones that cover their heads to their backs.

Hui women usually wear clothes opening at the side; young girls and married women like to inlay threads, embed colors, make roll-offs, and embroider flowers on their clothes.

The Hui people do not eat pork, or meat from dogs, horses, donkeys, or mules. If animals are killed by people of other nationalities or die naturally, the Hui should not eat their meat. Only meat from animals killed by an assigned chef or the imam from a mosque can be eaten.

Jokes about food are unacceptable, and any food that is unacceptable to the Hui cannot be used to make metaphors; for example, one should not say that the color of chili is red as blood.

The Hui people always pay close attention in their daily lives to hygiene. If possible, people should wash their hands using flowing water, both before and after meals. Most Hui people do not smoke or drink, and people cannot smoke or drink in others’ homes.

One should not bare his or her bosom or arms in front of others. While dining together, people senior in age should be invited to sit in the honorable seats, while people junior in age should not sit beside their seniors on beds or on kang, hot rock beds. Instead, they should sit at the edge or on benches on the floor.

Hari Raya Puasa (Fast-Ending Festival) is widely celebrated among the Islamic communities in China. The feast month of the Hui nationality, also called Ramadan, comes in the ninth month of the Islamic calendar. The festival lasts three days.

On the first day, just before dawn, people begin to prepare with hustle and bustle. All families get up early and begin to clean the courtyards and laneways to create an atmosphere of cleanliness, comfort, and pleasure for others.

Everyone, including men and women, young and old, wears favorite new clothes. Mosques are cleaned up during the festival. Colorful lanterns and large banners with slogans celebrating the festival are hung there.

Eid al-Adha, pronounced according to Arabic, means sacrifice or devotion; as a result, it is also called Feast of Sacrifice or Festival of Fidelity and Filial Piety. It is usually celebrated seventy days after the Fast-Ending Festival.

People select strong and bony livestock to kill. After the animals are killed, the meat has to be divided in three. The first part is for family members, the second part is sent to relatives, friends, and neighbors, and the last part is used as alms to help the poor.

The elderly take the meat and boil it, informing children that, after eating the meat, they should bury the bones underground and cover them with yellow earth, rather than giving them to the dogs. Some families invite imams to come, to chant the Koran and eat.

On this day, Muslims first go to the mosque to chant the Koran, blessing Mohammed and his family (Durood) and listening to imams lecturing on the life story of Mohammed.

They then donate grains, edible oil, meat, and money to the mosque; at the same time, they invite several people to take charge of milling flour, purchasing the things they need, frying cakes, boiling meat, and making dishes, etc.

All routine chores and errands are done by the ordinary Hui people, who come voluntarily. The people consider voluntary labor on this day to be doing good deeds, and all volunteer for jobs.

Try China Highlights' Silk Road Tours to explore the ancient culture and traditions of the Hui.