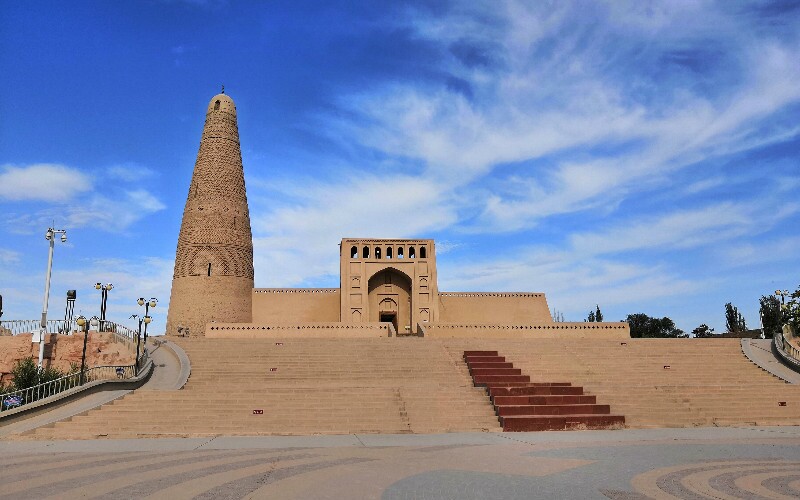 The Emin Minaret is also called the Emin Ta or the Sugong Ta. “Ta” means tower in Chinese. “Gong” means duke. Su is an abbreviation of Suleman. It was built by Duke Suleman to honor his father, Duke Emin, who had traveled to Mecca and helped to defeat a rebellion in the Qing Empire. It was made of mud bricks, but it stood for 232 years because there is little rain. Though the architecture isn’t anything extraordinary, since it is the only tall structure around and its patterned decoration is fascinating against the desert sky, it catches the eye. It is about 43 meters tall or about 140 feet high. The base is about ten meters wide. I think it is quite beautiful. However, others might not be impressed. An early explorer wrote that the Emin Minaret looked like an English factory chimney, only fatter. It is next to a square mosque that seats 1,000 people. Mosques are generally square, and the tower is round. The architect chose suitable proportions so that the two structures look balanced together. One doesn’t overshadow the other, and the patterns and colors fit well to match the surrounding scenery. The old minaret, the mosque and the surrounding scenery is a scenic highlight in Turpan.

The tower is about 2 kilometers or a little more than a mile to the east of the center of Turpan. This area still has a rustic rural look with old ruins, tall trees, and fields that makes a good setting for the old mosque. It is good that development and commercialization hasn’t preceded much in the area of the Emin Ta. So, one of the rewards of a tour of the tower is to see the scenery from the top of the mosque. Tourists are not allowed to climb the stairway inside the minaret.

The builders used simple material, mud bricks, to create a wonderful work of art. Thin narrow windows are randomly placed on the structure like cracks or crevices in a natural cliff face. The geometric patterns of flowers or waves on the wall swirl around and have a psychedelic effect. It is common in the Middle East for Muslims to decorate mosques with geometrical patterns. And it is common in China to use flowers to decorate things. The Uyghur builders used both, and the style of architecture is said to be similar to that used for minarets in Afghanistan. So there are cross-cultural motifs. The intricate patterns on the minaret complement well the bland smoothness of the mosque and set it off.

The mosque itself has smooth white walls on the outside and is windowless in the front. The structure has a small enclosed inner hall for use when it is cold. Around the inner hall are open and spacious outer halls for use when it is warmer. In these halls, elegantly thin wooden pillars and beams support a wooden ceiling, and the color and marks of the natural wood decorate the insides. The architecture of this Uighur mosque is like Uighurs themselves: warm and friendly.

About the same time that the Tang Empire was defeated in the year 856, a group of Uighurs came to the region. They fled from Mongolia when another people called the Kyrgyz conquered their main territory. The Uighurs took control of northern and western Xinjiang. The western Uighurs were the first to become Moslems. The northern Uighurs around Urumqi and Turpan were Manichean at first, but most became Buddhist or Nestorian. Nestorians believed in a kind of Christian doctrine.

About the year 1209, the Uighurs around Turpan submitted to Genghis Khan of the expanding Mongol Empire. He used some educated Uighurs as officials in his empire, and they helped to conquer and administrate China. The Mongols established the Yuan Dynasty (1271-1368) and also conquered much of Eurasia from Korea to Hungary. After conquering Muslim countries in the west, many Mongols converted to Islam, and the Mongols sent Muslims eastwards to be officials and administrators of China. Muslim traders and merchants moved east as well. Then about the middle of the 14th century, the Mongol Empire collapsed. There was a lot of regional warfare, and the Silk Road trade withered.

The Manchus from the area north of China conquered the Ming Dynasty and established the Qing Dynasty (1644-1911). It is strange how many widely traveling and conquering tribes came from that area in world history. Most Uighurs were Moslems early in the Qing Dynasty. Turpan’s hereditary ruler, Emin Khoja, defeated a rebellion. Emin Khoja also traveled to Mecca which was regarded as an achievement at that time. In honor of his father, his son named Suleman built the tower. It was designed by a Uighur architect named Ibrahim in a Persian and Afghani style.

China Highlights is your China travel expert. We can help you customize a tour to explore Turpan and other places on the ancient Silk Road, or just have a look at our Silk Road Tours

To learn about the history of the Silk Road and of the Uighurs in Turpan, you might want to visit the Turpan Museum that is in the middle of the city. About three kilometers or 1.5 miles west of the center of Turpan is the Karez Museum (坎儿井博物馆 in Chinese).