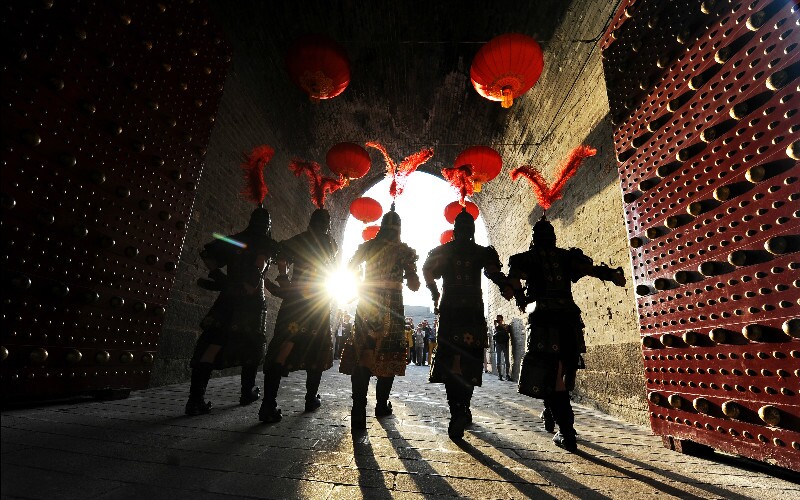 The Top 7 Historical Attractions to Visit in Xi'an

Xi'an is one of the oldest cities in China with about 3,000 years of history. The abundance of historically important relics and cultural heritage makes Xi'an one of the top historical destinations in the world and perhaps the best place to witness China's (ancient) history.

Here, we have listed the top 7 historical attractions to visit in Xi'an.

1. The Terracotta Warriors and Horses — an Eighth Wonder of the World Regarded as one of the most significant archaeological finds of the 20th century, the excavation site of the Terracotta Army around Emperor Qin Shi Huang's Mausoleum is a must-see attraction in Xi'an and even in the whole of China.

You will be amazed by thousands of life-size terracotta soldiers, which were made over 2,000 years ago. It is an incredible site that helps us to understand the ancient culture of China.

2. The Ancient City Wall — a Great Example of City Fortification Cycling along the wall is very popular.

The Ancient City Wall in Xi'an is one of the oldest, largest, and best-preserved city walls in China. It was erected in the 14th century during the Ming Dynasty.

The Ancient City Wall is rectangular in shape and has a total length of 14 kilometers (8.7 miles). It completely encircles the old city with a moat, drawbridges, watchtowers, and gate towers.

Strolling or cycling along the wall is very popular among tourists. Looking down from the wall, you will see the city life without interfering with it.

3. Big Wild Goose Pagoda — One of the Birthplaces of Buddhism Big Wild Goose Pagoda was one of the birthplaces of Buddhism in East Asia. It was built in the Tang Dynasty (618–907) for the study of Buddhist scriptures, which were brought back from India by the Buddhist monk, Xuanzang.

The seven-story pagoda is an architectural marvel. It was built with layers of bricks without any cement. Now the building leans noticeably, by several degrees, to the west. Visitors can climb the pagoda to appreciate views of the city, for an extra fee. The Han Yangling Mausoleum is the burial place of Emperor Jing, the fourth emperor of the Western Han Dynasty (206 BC – 8 AD), and Empress Wang.

This is another fascinating underground museum for fans of ancient clay figures. More than 50,000 miniature terracotta figures are displayed there. This tomb and its relics are not as magnificent as those at Qin Shi Huang's Terracotta Warriors Museum, but they are more vivid.

You walk over the pits through a glass corridor to view the artifacts below, through the glass floor. The miniature figurines include armed warriors, palace maids, and animals with vivid expressions.

5. The Bell Tower — a Landmark of Outstanding Architecture Built in 1384 during the early Ming Dynasty (1368–1644), the Bell Tower is the geographical center of ancient Xi’an and is also a landmark of this city.

It is a wooden tower with a height of 36 meters. It is the largest and the best-preserved one of its kind in China, and it’s of a high historical and artistic value.

It is quite beautiful by night with all of its lights. From the top of the tower, you can have a panoramic view of the city.

6. The Drum Tower — Iconic and Biggest of Its Kind Located across from the Bell Tower, the Drum Tower is a symbol of the city. Built in the early 14th century, this two-story rectangular structure is 34 meters in height and is the biggest among its congeners in China.

This tower combined the architectural styles of the Tang (618–907) and Qing (1644–1911) dynasties. There are 24 drums hanging along the sides of the tower, some of which can be dated back thousands of years. If you appreciate Chinese history or ancient artworks, Shaanxi History Museum is a must-visit attraction. This 70,000-square-meter structure makes it one of the largest museums in China.

The museum houses over 370,000 historical relics excavated from all over Shaanxi Province, including bronze ware from the Western Zhou Dynasty, 3,000 years ago, as well as gold and silver wares, and murals discovered in tombs from the Tang Dynasty. Some of the terracotta warriors and horses are also displayed there.

The museum is free to enter, but you need to show your passport to get into it. The number of visitors is limited to 4,000 per day. Planning to visit Xi'an? See our popular Xi'an tours below, for inspiration.

Not interested in the above tours? We are more than happy to create a tour for you based on your interests and requirements.