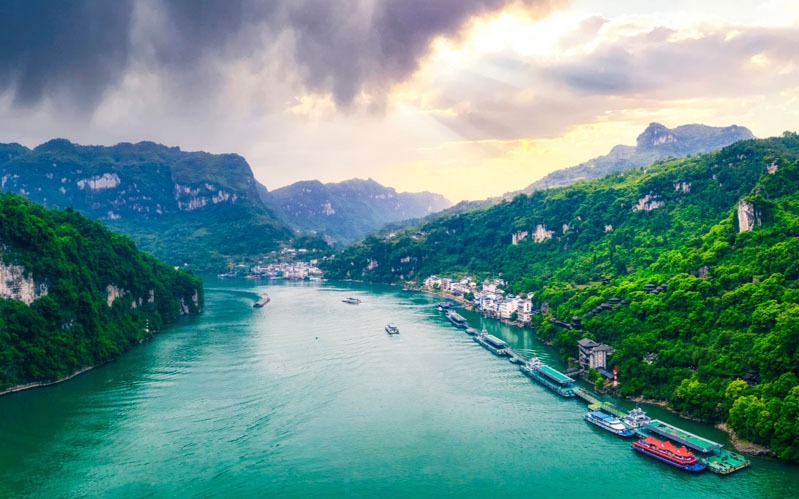 As the longest river in China, there are many hub cities and ports along the Yangtze River. Chongqing, Yichang, and Shanghai are the three major port cites for Yangtze River cruises in 2021.

Chongqing is located near the end of the navigable part of the Yangtze River for large ships. It is located in the transition area between East China where the economy is developing quickly, and West China where there are abundant resources. So, Chongqing is the hinge of transportation in Central China with a highly developed transport infrastructure.

Chongqing is a city with a long history, so it is worth taking time to experience its culture. Besides, around the Chongqing urban area, there are some scenic and historical highlights such as Dazu County’s ancient rock art carvings and the rocky national park scenery at Wulong. If you’re interested, you could easily combine a Chongqing tour with a Yangtze River cruise if you embark at Chongqing.

Getting to Chongqing by Air

Chongqing’s 144-hour visa-free transit policy, when pandemic restrictions are relaxed, will again allow access to the whole of Chongqing (but not as far as Yichang in Hubei, so it’s no use for cruise takers) for those going to a third country via Jiangbei International Airport. It’s valid for 53 countries, including the US, UK, Australia, Canada, and New Zealand, but not South Africa.

Getting to Chongqing by Train

To get to Chongqing city, it is suggested to take the high-speed train for a good travelling experience.

Currently, Chongqing West Train Station and Chongqing North Train Station are the two major stations for high-speed trains to major cities in China, such as Beijing, Shanghai (10 hours), Xi’an (5 hours), Wuhan (7 hours), and Guangzhou. However, a flight would probably be more convenient for cities further than Wuhan.

Moreover, the daily bullet trains take only 1½–2 hours from Chengdu to Chongqing. It is convenient to enrich your Chongqing tour with a trip to Chengdu by train.

Getting to Chongqing’s Cruise Port

Address of Chaotianmen Port (朝天门码头): 17 Changbin Road, Yuzhong District (渝中区长滨路17号) — There is little English in Chongqing, so you may need to use the Chinese.

From the  airport to Chaotianmen Port

Especially if you are unfamiliar with China/Chinese, getting to Chaotianmen Port by our private English-speaking driver service is the most stress-free way. Contact us for a private transfer from the airport / railway station to Chaotianmen Port.

Chongqing Chaotianmen port is the usual starting point for a Yangtze River cruise from Chongqing. This port is very large with 18 piers, usually piers 7, 8, and 9 are used by Yangtze cruise ships, but there is no assigned pier for any cruise company except Victoria Cruises. A ship’s pier number is only announced 1 to 2 days prior to departure in Chongqing. If you book a trip with us, we will inform you as soon as we can.

There are many steep stairs from the car park to the dock. We can arrange porters to transfer your luggage to the ship at US$2–3 per piece. Please feel free to contact us if you need this service.

The Three Gorges Dam in Yichang

Yichang is one of the major port cities along the Yangtze River. It’s known as “Gateway to the Three Gorges”.  It is also the start point of the 5-day upstream Yangtze River cruises to Chongqing. Thanks to China’s increasingly advanced transportation network, it is convenient to get to Yichang by air, train, and coach from many other popular destinations in China.

Getting to Yichang by Air

Yichang Sanxia Airport is 26 km (16 miles) from the city center. Though it is only a medium-sized domestic airport, it serves regular flights to/from some major cities of China, such as Beijing, Shanghai, Guangzhou, Hangzhou, and Chengdu.

Getting to Yichang by Train

Also see How to Travel from Wuhan/Yichang to Zhangjiajie.

From the Airport to Yichang Three Gorges Center Cruise Terminal

Yichang’s public transportation system is not as convenient as Chongqing’s. To save your time and energy, it is suggested to book China Highlights private car service in Yichang.

Shanghai is in East China and covers the south of the Yangtze River Delta. As China's biggest and most prosperous city, Shanghai has a world class transportation network of flight routes, roads, railways, a metro, and international cruises. Every day, there are hundreds of domestic and international flights between Shanghai and many cities in China as well as many major cities abroad (now limited by COVID restrictions).

Shanghai is a splendid metropolis blending West and East, modern and medieval. No matter which aspect of Shanghai you are interested in, it will not disappoint you.

Stroll down the Bund promenade. Enjoy a panoramic view of the city from one of the world’s tallest buildings or immerse yourself in classical Yu Garden. There are so many ways to discovery this city. See our Shanghai tours. We will show you the real Shanghai and guide you to experience the lives of local people.

Getting to Shanghai by Air

Shanghai Pudong International Airport is the largest airport in Shanghai, which serves over 80 domestic and foreign airlines, and connects with over 100 international and regional destinations as well as over 90 domestic destinations.

Passengers from 53 countries or regions can enjoy a 144-hour visa-free stay in Shanghai and its nearby areas. See more on How to Transit in China for 144 Hours without a Visa.

Getting to Shanghai by Train

Check out more on Shanghai Transportation.

Getting to Shanghai’s Yangtze Cruise Port

In 2021, the cruise ship Century legend and Victoria Sabrina will run cruise trips between Shanghai and Chongqing (and vice versa) on certain dates. Shanghai Port International Cruise Terminal is the port for embarkation and disembarkation. It is the largest cruise port terminal in Shanghai, with a water front of 880m, covering 41 hectares.

From Pudong Airport to the Cruise Terminal

From Hongqiao Airport / Railway Station to the Cruise Terminal

In Shanghai, for your convenience, it is highly suggested to book a private car with English-speaking driver for transfers between your airport / train station and cruise port. Check out more about our Shanghai Pickups and Transfer Service.

We highly recommend you to book a Yangtze River cruise with us which includes transfer services in the port cities. Our professional travel advisor will offer you free consultancy about your cruise plan and detailed transportation guidance in the port cities for your Yangtze cruise. Contact us for a perfectly organized trip.

See our schedule of all the cruise ships in 2021.

Explore More of China with your Yangtze River Cruise:

Majestic China: The essence of China (8 days of ancient culture and modern miracles in Beijing, Xi’an, and Shanghai) is there to be discovered alongside a majestic 4-day Yangtze River cruise. Discover more of the "New China" with your expert guide and driver.

Land of Pandas: With comfortable accommodation and transportation, this 13-day tour features a close experience with giant pandas in Chengdu as well as the famous Golden Triangle and a Yangtze River cruise per Majestic China.

Nature of China: This 15-day tour brings the natural wonders of the Yangtze River and Zhangjiajie closer to you and shows you the essence of China in Beijing, Xi'an, and Shanghai. Enjoy the beauty of China with stunning natural views.

Our tours can be tailor-made according to your group size, travel time, interests, budget, and other requirements.