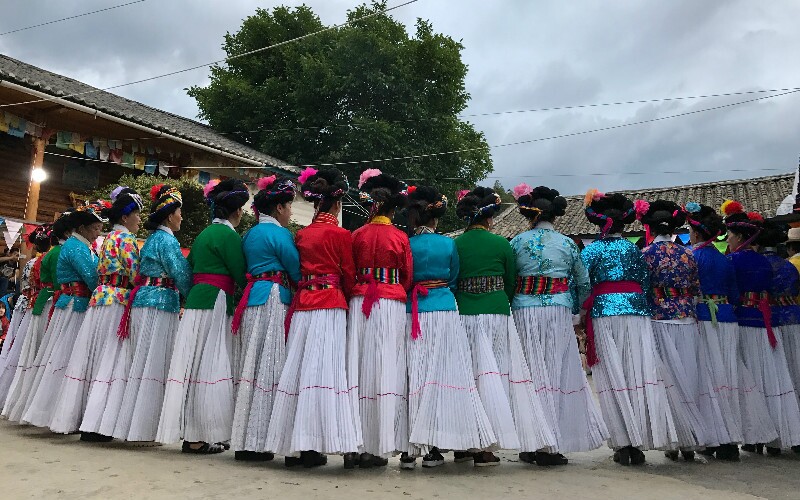 The Top 7 Ethnic Festivals in Yunnan

Yunnan has the greatest number of ethnic groups in China, with officially 25 ethnic minorities including Bai, Yi, Dai, Naxi, Hani, Miao, Tibetan, Hui, and Yao. Yunnan offers unique and exciting experiences of ethnic customs, with more than 400 ethnic festivals celebrated throughout the year.

Many ethnic minorities maintain their unique folk traditions and customs that are full of myths, singing, dances, paintings, and ancient music. We have listed the following ethnic festivals as worth attending while visiting Yunnan.

If you are already planning to visit Yunnan, see our Festival Tours, or we could customize a unique festival tour for you.

1) The Third Month Fair of the Bai Ethnic Group (三月街)

Festival: Also known as the Guanyin Fair, the Third Month Fair is one of the most important festivals celebrated by the Bai ethnic people in Dali in western Yunnan Province. During the March Fair, the streets of Dali Ancient Town are packed with temporally stalls selling a mind-boggling variety of items and ethnic minority souvenirs.

Location: Lijiang and other places with the Yi, Naxi, or Bai minorities

Festival: The Torch Festival is a traditional festival among the Yi, Naxi, and Bai minority groups. It is also known as the Oriental Carnival. Of the Torch Festival celebrations, the most famous one is the Lijiang Torch Festival. According to the ancient rule of the Naxi people, the Torch Festival should last for 3 days, and every family should light a big torch in front of their doors for the 3 days.

Festival: The Water Splashing Festival is the most important festival observed by the Dai people of Xishuangbanna Prefecture in southern Yunnan. It’s similar to neighboring Thailand's Songkran Festival (the Dai and Thai have many similarities, not least in name), and represents their Spring Festival or New Year. It involves splashing people and Buddha statuettes with water as a blessing amongst other joyful festivities — feasting, lantern floating… — that last three days.

Date: Usually in March (8th of the second lunar month)

Festival: The Sword Pole Festival, also called Dao Gan Festival (Dao Gan is Chinese for ‘Sword Pole’), is celebrated by Lisu people in Nujiang Lisu Autonomous Prefecture and the Yunnan Three Parallel Rivers area. During the festival, performances like “entering the fire-sea” and “ascending the sword mountain” are enacted, when you can see local people walk barefoot over burning coals and climb up ladders made of knives barefoot and barehanded.

Festival: The Horse Race Festival, falling on the same date as the Dragon Boat Festival, is the grandest gathering of Tibetans in Yunnan and usually lasts for about 3 days. During the celebrations, traditional equestrian performances and competitions like horse racing, wrestling, tugs-of-war, and ox-drawn bars will be held.

Date: Usually in March (8th of the second lunar month)

Festival: The Sanduo Festival is a traditional festival of the Naxi ethnic group. During the festival the Naxi ethnic people gather around Sanduo Temple (also known as Beiyue Temple) in Baisha Village near Lijiang Old Town for a grand memorial and sacrifice ceremony.

Festival: Worship Gathering in the Three Temples is also called Guanshanglan, a Mandarin transliteration of the Bai language. It is a carnival for the Bai people in Dali to entertain themselves during the farming slack season. It is also an occasion to welcome the coming of immortals from heaven. This event dates back to ancient times and was originally a religious ceremony. The three temples involved are Chongsheng Temple, Shengyuan Temple, and Jinkui Temple.

Other Recommended Festivals in Yunnan

More on Chinese Festivals and Events>>>

If you are interested in the above ethnic minority festivals, we can help you make the most of your Yunnan festival experience. See our Yunnan tours below for inspiration:

See more Yunnan tours, which cover the highlights of Yunnan and also include exclusive programs to give you a unique experience. Contact our travel experts to tailor-make a tour.