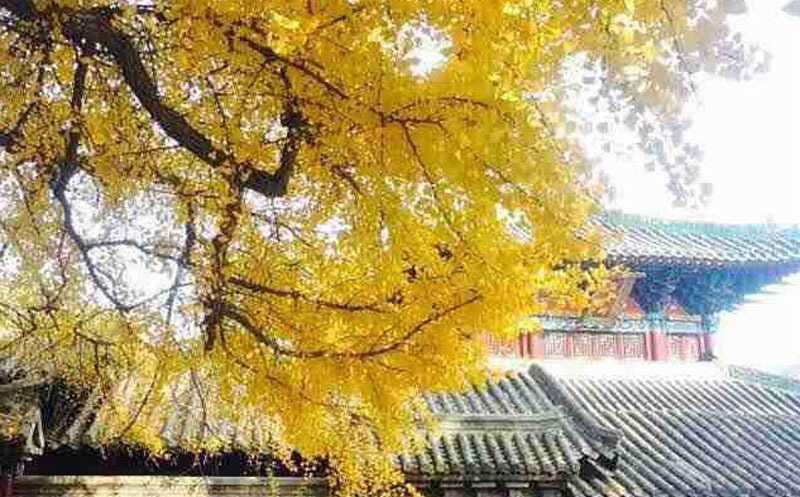 Traditionally, the best time to view the gingko trees in Beijing is from October 20th until November 15th every year. At this time of year, the yellow and green ginkgo leaves dance with each other like clusters of butterflies, and the contrast with the ancient grey buildings is a distinctive sight.

There is a thousand-year-old ginkgo tree at Dajue Temple in the Western Hills area of Beijing. Every autumn, the ginkgo leaves turn gold, and the harmonious match with the secluded, ancient temple forms a view that you will not easily forget. The best time to view the trees at Dajue Temple is from October 22nd until November 11th. During this time, the temple will hold the Dajue Temple Culture Festival, with the theme of appreciating gingko trees and promoting ginkgo culture.

There are four ancient gingko trees at Dajue Temple. The Ginkgo King on the left side of Amitayus Hall has a history of more than 1,000 years. It is over 30 meters in height and about 7 to 8 meters in diameter. It would take seven or eight people to encircle it. More than half of the yard is covered by shade from the great Ginkgo King tree.

Standing majestically on the east side in front of the Vairocana Buddha hall, the ancient ginkgo of Tanzhe Temple has a leafy green crown and is over 30 meters tall. The large and straight trunk has a circumference of about nine meters. It was planted in the Tang Dynasty, over 1,300 years ago.

The largest temple in northern Beijing, Hongluo Temple has many famous gardens - the "Three Wonders". One of the wonders is the pair of ginkgo trees from the Tang Dynasty that are in front of the Main Hall, one male and the other female.

Inside the Stone Buddha Temple in Siqiaozi Village outside Juyong Pass, Changping district, there stands a large, ancient ginkgo, which is over 30 meters tall and has a circumference of 7.6 meters. The ginkgo was planted in the Tang Dynasty, over 1,200 years ago, and it is known as the "Great Holy Wood of Guangou," one of the "72 Guangou Attractions". Now it has become one of the attractions around the Badaling Great Wall. This ginkgo is a female, with branches full of rich fruit every autumn.

Xifeng Temple is on the east side of Tanzhe Temple. The temple is divided into an upper and a lower part. Inside the upper part there stands a giant, towering ancient ginkgo. It is over 30 meters tall, and has a circumference of 7.5 meters, a relic from the Song Dynasty. This gingko is also female, and it is the most productive ancient ginkgo in the Beijing area.

Inside the Xiangtangzi Primary School (the site of Xiangyan Temple during the Tang Dynasty) in Juge Village, Miyun county, there is a great, ancient gingko tree, with a height of 25 meters and a circumference of 9.1 meters. It was planted before the Tang Dynasty, over 1,300 years ago. It is known as the "Oldest Ancient Ginkgo" in the Beijing area (identified by experts from the Beijing Bureau of Parks and Woods in the autumn of 1990). According to the Old Stories of Beijing City: "There is a ginkgo in the Xiangyan Temple, so the temple is also known as Gingko Temp le." This ginkgo is regarded as a "divine tree" by the villagers nearby. In the past, people hung various banners with words of prayer and blessings on the ginkgo, in the hope that they would bring good luck and prosperity.