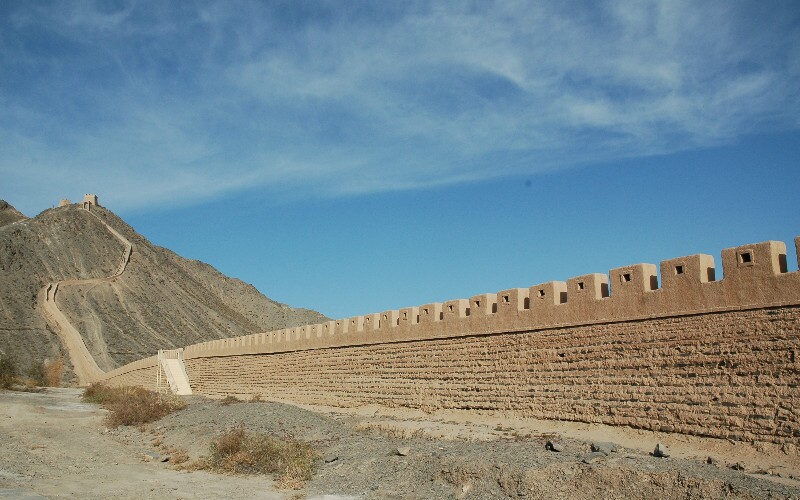 The Overhanging Great Wall, was built on a steeply sloping valley mouth. When viewed from afar, the wall looks like a magnificent painting hanging over the cliff, which is how it got its name.

Because it is very similar in appearance to the Great Wall at Badaling, it is also known as "Western Badaling".

The Overhaning Great Wall is 14 km northwest of Jiayuguan City center, and about 8 km north of the Jiayu Pass Fort. It is an extended part of the Jiayu Pass military defense system, protecting water resources and acting as a northern lookout point.

Who Built It and When

The magnificent Suspended Great Wall, completed by Gansu Patrol Commander Li Han in the 19th year of the Emperor Jiajing's reign (1540) during the Ming Dynasty, defends the northern entrance to Black Mountain Valley.

The Hanging Wall was built on a ridge with a gradient of 45 degrees, and it was made of tamped local gravel and yellow earth.

The Overhanging Great Wall in the picture was rebuilt in 1987.

You can see austere panoramas from the Suspended Great Wall. For the convenience of climbing, steps were built on the wall. Despite these, it is still a steep climb to the top of the 400 steps, but it is worth the effort when looking out from the top.

The scenery is strikingly arid - north the desert extends to the horizon; there are a few oases north of Jiayuguan to the east; to the south and west are steep dry mountains and gullies.

Jiayuguan has a temperate continental desert climate, influenced by the towering Qilian Mountains to the south. The temperature difference between day and night is large. UV-radiation is high, but it can be chilly and breezy.

Winter is bleak with temperatures well below zero. May to September is the cutoff period for comfortable temperatures (average range (8–22°C or 47–72°F). In July the average temperature range gets up to 15–29°C (59–84°F).

Or you can use China Highlights' private transfer service - contact us and we will help you take the hassle out of getting to the wall by using high-quality, air-conditioned private transport, with an experienced driver and an English-speaking tour guide.

There are many hotels of various levels in central Jiayuguan, but nothing near the Overhanging Great Wall.

If you want to see the desert scenery of the west end of the Great Wall around Jiayuguan, China Highlights can help you. Contact us with your interests and requirements, including anywhere else you'd like to visit, and we will tailor-make your China tour.