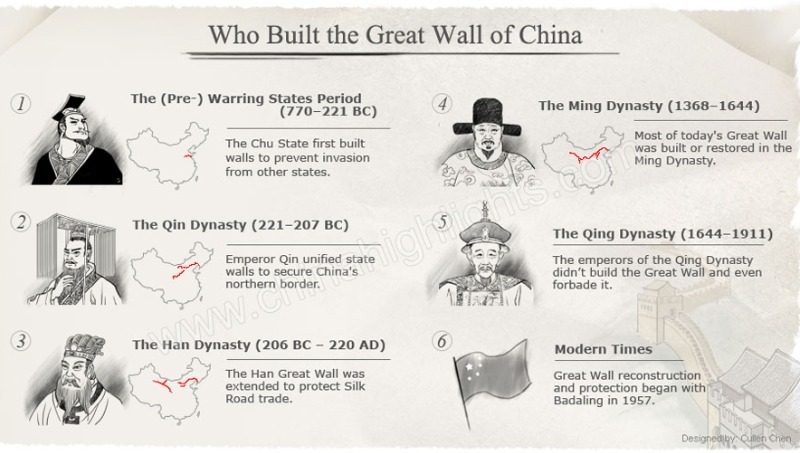 Who Built the Great Wall of China? When and Why?

The widely known Great Wall builder is the First Emperor of the Qin Dynasty (221–207 BC). But before and after him, the Great Wall was built and rebuilt by many dynasties and governments, and by millions of laborers and artisans for purposes of border defense, signals and troop transfer, and international trade.

After the unification of China at the beginning of the Qin Dynasty (221–207 BC), China's First Emperor, Qin Shihuang (you must have heard of his Terracotta Army), linked the walls of the three northern states (Qin, Zhao, and Yan) to defend China from the northern Xiongnu.

A well-preserved section of the Qin Great Wall was found at Baotou, but it’s not a popular tourist spot.

The Great Wall Was Built By Several Dynasties

The Great Wall was first built by three warring states, then extended and rebuilt by at least nine dynasties, and has been restored as a tourist attraction by the Chinese government.

The following table shows who built the Great Wall and when.

The Real Builders of the Great Wall

Builders of the Great Wall

When the emperors ordered the building of the Great Wall, guess who the workforce was. Civil engineers? Stonemasons? Bricklayers? …Heavy machinery operators?

Actually mainly the workers were soldiers, peasants, and some prisoners.

How Many People Built the Great Wall?

The Great Wall was built over more than 2,000 years, and a length totaling more than 20,000 km was constructed. An accurate number of workers is unknown, but it must be in the millions. According to Historian Records (史记), 300,000 soldiers were sent to build the Great Wall in the Qin Dynasty, and it took 9 years.

Most people believe that thousands upon thousands of workers died building the Great Wall.

Are There Really Bodies Inside the Great Wall?

It was widely believed that there are bodies buried in the Great Wall during its construction. This belief was popularized by legends like "Meng Jiangnv Weeping Over the Great Wall", which tells a story of a husband buried in the wall and a wife who wept until the wall collapsed.

However, no evidence of any dead bodies inside the wall has been found. And it doesn’t make sense to bury bodies in the Great Wall, as the structure of the wall would be weakened when the bodies decomposed.