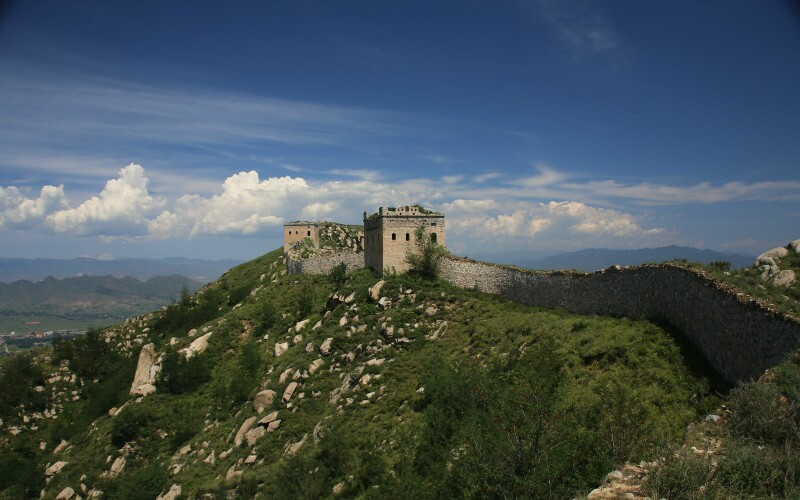 The Great Wall of the Ming Dynasty

The Great Wall of China existing today was mainly (re-)built during the Ming Dynasty (1368–1644).

The Great Wall of the Ming Dynasty starts from Jiayuguan in western China’s Gansu Province, following the mountains bordering Inner Mongolia and the North China Plain, to the Bohai Gulf at Shanhai Pass, and then looping round the Bohai Gulf to terminate at the Hushan Great Wall section on the North Korean border.

Why Was the Ming Dynasty Great Wall Built?

After the establishment of the Ming Dynasty in 1368, the Mongolian rulers of the overthrown Yuan Dynasty retreated to Inner Mongolia, but still attacked southward, burning, killing, and pillaging. Meanwhile, the Jurchen (Manchu) People, who had ruled North China before the Mongols in the Jin Dynasty (1179–1234), also threatened border security in northeast China.

To stop north China being reclaimed by the Mongols or Manchurians, the Great Wall was constantly constructed under imperial orders. Ming Dynasty China fell to the Manchurians in 1644, when, already compromised by rebellion within, the Great Wall at Shanhai Pass was surrendered by a defecting Ming general.

How Was the Ming Dynasty Wall Constructed?

Local topography and materials were fully made use of in constructing the Great Wall. Where there were mountains, the steepest mountain ridges were used for their tactical advantages, and the passes were fortified.

What Building Materials Were Used?

In some places, rock blocks were carved out of the mountains and stuffed with soil and lime, making a very solid wall. The Great Wall in the loess plateau area was made of rammed soil, while that in the Gobi Desert was made of a combination of reeds, willow braches, and small pieces of stone.

What Technology Was Used?

The Ming Dynasty Great Wall was mainly built by man power, as machinery for construction and transport was not available. A single rock block weighed about a tonne, and a "brick" weighed over 15 kilograms, both were made of solid sandstone.

The Great Wall’s bricks were mainly transported by hand from one man to another in human chains, though wheelbarrows, rolling logs, iron claws, and winches were employed as well. It is said that donkeys carried baskets of lime and goats transported bricks to the mountain tops, however most jobs were done by men.

The Builders of the Great Wall

The Structure of the Ming Great Wall

The Great Wall of the Ming Dynasty is also known as the Fourth Great Wall, and was stronger and better than any previous walls due to better construction techniques employed.

The Great Wall of the Ming Dynasty had several types: brick wall, stone-block wall, rammed-earth wall (trapezoidal with trenches), mountain-hewn wall, wooden wall (fences in forest areas), and trench wall, which were employed according to local topography and availability of materials.

Features: The wall body sometimes had a brick skin and drainage trenches on both sides. Arch gates, steps, and blind passages were used for access.

Battlements topped key parts of the wall, and some sections, such as Mutianyu, had battlements on both sides to show their important military status. Usually, battlements were 1.8 meters (6 feet) high with loopholes and crenels, and parapet walls were 1.2 meters (4 feet) high.

Forts were built at important access points along the Ming Great Wall, controlling communications between Ming China and its northern neighbors with several layers of walls and gates.

These defensive strongholds featured high and thick walls, and several gates, ranging from 500 meters (550 yards) to 2 kilometers (2,200 yards) in perimeter. They were used for barracks, and Great Wall laborers sometimes also lived in the forts. Some forts have beacon towers, which were a vantage point for defensive archery and for sending messages.

The stone-block Great Wall is best represented by the fort at Juyong Pass (guarding the key northwest pass to Beijing). The external wall body is made of stone blocks filled with stone fragments. It is 7–8 meters (23–26 feet) high, 6–7 meters (20–23 feet) wide at the base, and 5–6 meters (16–20 feet) wide at the top.

Partially protruding from the wall, flanking towers, every 300 meters (984 feet) or less along the Great Wall, enabled defenders to fire on attackers scaling the wall from their flanks. They were used by soldiers for sheltering from the wind and rain. Without flanking towers soldiers could not shoot arrows effectively (from cover) once the attacking army reached the wall.

Dilapidated watchtowers at the Jinshanling Section of Great Wall

Watchtowers were used by soldiers as observation posts and garrisons for storing weapons, provisions, and fodder.

Usually built on the top of ridges, beacon towers were built for sending messages to warn of invasion. Wolf dung was lit during the day (because of its thick, dark smoke) and flaming torches were lit at night.

The beacon towers were particularly solidly built, at the top of which firewood and other beacon fuel, arrows, and gunpowder were stored. Below were the living quarters, with horse/sheep stalls and storerooms. Usually beacon towers were set up every 5 kilometers, which is within eyesight in normal visibility.

The Most Famous Sections of the Ming Great Wall

The Great Wall sections we can see today were mainly built during the Ming Dynasty. Most of the most famous sections are in a 130-km (80-mile) line north of Beijing, e.g. Badaling, Juyong Pass, Mutianyu, Simatai, Jinshanling ...

The Great Wall of China is a must for any travelers to China. See below our most popular Great Wall tours: