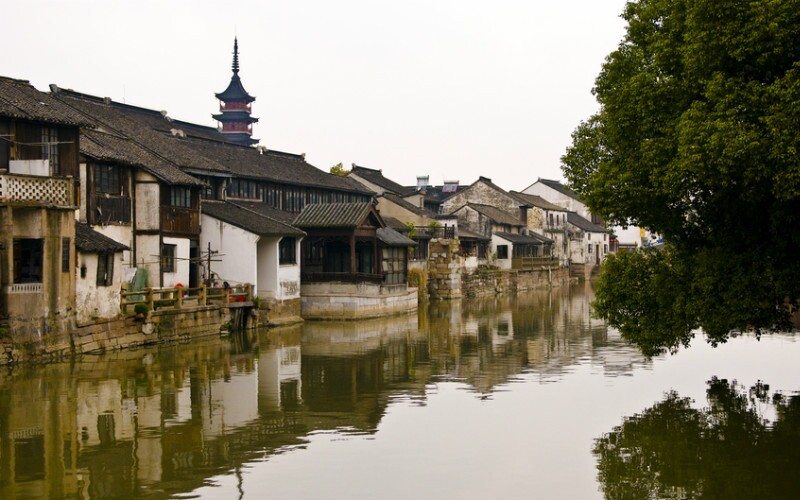 Qiandeng (Thousands Lights) town is located in Kunshan City of Jiangshu Province which is only 22 kilometers east of Pudong District, Shanghai. With a history of more than 2,000 years, it is notable for its cultural background, the typically colorful lights, the well-preserved ancient residences, and the elegant watery views.

As the birthplace of Kunqu Opera and the hometown of Gu Yanwu (a famous patriotic poet of the Qing Dynasty), Qiandeng Ancient Town is among the famous historical and cultural towns in Jiangsu Province with a history of over 2,500 years. The town is a gathering place of talented people and cultural relics from China’s history, and it’s accessible by both land and water.

Qiandeng Ancient Town is noted for its typical southern Chinese riverside scenery featuring small bridges, murmuring streams and elegant dwellings, and it’s an ideal destination for relaxing and spending your holiday. A number of architectural buildings of the Ming and Qing dynasties are retained in the town, which are characterized by the Suzhou style and the Huizhou style, and you can fully appreciate them on Zhongshi Street, Qinpan Street and Nanshi Street.

The town has an antique flavor featuring white walls and black titles, where the highlighted attractions include the Former Residence of Gu Yanwu, the Tomb of Gu Yanwu, Qinfeng Tower and the Yu’s Pawn Shop.

The 3,000-meter long stone Slate Street was built in the Southern Song Dynasty, and still retains its original appearance after the renovations made in the Ming and Qing dynasties. It’s composed of 2,072 pieces of stone slates, boasting the best-preserved and longest of its kind in Jiangsu Province. The Yu’s Pawn Shop boasts of being the first pawn shop in China.

The 38.7-meter tall brick-structured Qinfeng Tower was built in the 2nd year (503) of the Tianjian period of the Liang Dynasty, and is the symbol of Qiandeng Ancient Town; it’s also called Beauty Tower owing to its slender silhouette towering into the sky. Beneath Qinfeng Tower stands the Jade Buddha Hall, where a reclining jade Buddha is enshrined. The jade Buddha is decorated with over 1,500 rubies, sapphires and emeralds, and is of a high aesthetic value being 2.45 meters in height and 30 tons in weight.

In addition, Shaoqing Park, Three Bridges under the Moon and Datang Ecological Garden are very popular among locals in the town, and you’re also recommended to visit Tongli Ancient Town and Zhouzhang Ancient Town after visiting Qiandeng Ancient Town.

Transportation: buses 112 and 113 will take you there from Kunshan

The former residence of Gu Yanwu, an ancient construction of Ming and Qing Dynasty style, is a historic site. Gu Yanwu, a Chinese philologist and geographer of the Ming Dynasty (1368–1644), was known for his famous remark: "Everyone should be responsible for the rise and fall of his country." Entry costs 6 yuan.

Qianfeng Tower is opposite the former residence of Gu Yanwu. Repeated improvement and expansion has turned the tower into a traditional and plain one nearly 40 meters high. It is interesting that there is one brass bell for each cornice on each storey. When a gentle breeze comes, the brass bells make musical sounds. Entry is 5 yuan.