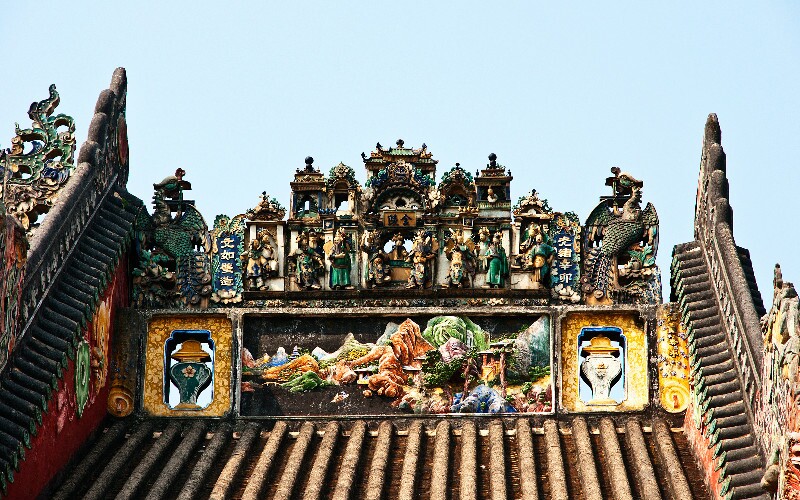 Ancient Chinese architecture was designed to be attractive, especially the distinctive roofs. Traditional Chinese roofs had different forms at different stages of history. There were various roof styles with functional features, a hierarchy of designs, and exquisite details.

Joints were favored over metal fixings. The interlocking and overlapping columns and crossbeams made the roofs not just strong, but also interesting to look at.

The upturned eaves on roof corners are the most identifiable mark of Chinese roof architecture. The upturned roof design appeared during the Han Dynasty (206 BC – 220 AD) and were the standard type used until the Song Dynasty (960 – 1279).

Rounded tiles were most commonly used with profiles of arcs and semicircles. The most popular way to interlock rounded tiles was to place rows of cupped tiles on the roof, then rows of arched tiles spanning between them, their edges inside the cupped tiles.

The combination of lines, curves, and upturned eaves increased the roofs' surface area . This design not only improved the drainage of rainwater and reduced snow load, but also added a special aesthetic to the architecture.

Roofs in southern China were normally steeper than those in the north for extra drainage, while roofs in northern China put more emphasis on lighting and warmth.

Ancient Chinese roofs had wide eaves, which could shield the walls below from all but the fiercest wind-driven rain. This characteristic kept the internal pillars and brackets, which were usually made of stone or wood, protected from erosion caused by rainwater.

3. A Symbol of Hierarchy

There were many kinds of roofs in ancient Chinese architecture. Different roof forms were used for different types of buildings. Here are the four main types in order of hierachy.

There were two kinds of hip roof: single-eave and double-eave. Double eaves were only used in royal palaces and Confucian temples during the Ming (1368–1644) and Qing (1644–1912) dynasties. The roof of the Hall of Supreme Harmony in the Forbidden City is the best example.

'Resting hill' or Xie Shan roofs (歇山顶 xiēshāndǐng), with two curving sides, were second in importance to hip roofs. They were mainly used for important halls, temples, gardens, and other official buildings.

There were two styles of Xie Shan roof: mono-eave and double-eave. The Hall of Preserving Harmony in the Forbidden City has a resting mountain roof with double eaves.

They were one of the most frequently used roof designs for more well-to-do premises in China. The most obvious feature is eaves overhanging the gable walls by three-tenths of the wall height.

Hard hill roofs (硬山顶 yìngshāndǐng) had a main ridge and raised sloping ridges on the gable walls. It was a very simple style with two slopes facing front and back.

Considered a low-grade roof style in China, in the Ming and Qing dynasties hard hill roofs were mostly used in common buildings.

Tiles were the most common material used for ancient Chinese roofs. They provided good protection against fire, stayed waterproof, and were good for drainage.

Residential buildings weren't allowed yellow glazed tiles, which were reserved for use on royal buildings.

The Hall of Supreme Harmony

A row of mythical animal figures was placed on the tails of the ridges at the four corners. These ridge beasts were called 'crouching beasts' in Chinese and most of them were from Chinese fairy tales.

They not only played a decorative role, but also highlighted Chinese beliefs. Ancient Chinese people believed that these mythical ridge beasts on the roofs would prevent fire and drive away demons.

The size and number of ridge beasts symbolized the rank and luxuriousness of the building. As the grade of a building reduced, the ridge beasts decreased accordingly.