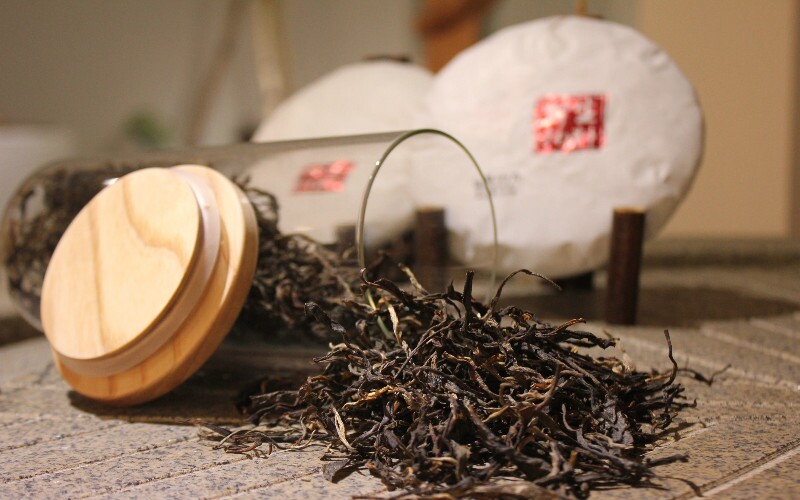 China's black tea is not the same a black tea in the West (which is called red tea in China). 'Black tea' in China is also known as fermented tea or dark tea. It originates from China and was introduced to India and Sri Lanka by merchants in the 19th century.

It is made from the leaves of the tea shrub (Camellia sinensis) after the processes of withering, rolling, fermenting, and drying. It is much more oxidized and stronger in flavor than green tea and white tea. Actually, the infusion of black tea is red; however, its oxidized leaves are black, hence its name.

Generally speaking, black tea is processed in two ways in China: CTC (crush, tear, and curl) and orthodox. Each has its own style and both go through the following four processes:

The newly-picked tea leaves are first withered by blowing air onto them until their veins are transparent.

The withered leaves are rolled into strips either by a rolling machine or by hand. The rolling machine process results in a mixture of whole leaves, broken leaves, and fine particles. The hand process is used for producing high-quality tea, which is highly valued by tea tasters and blenders.

As the most important step in making black tea, fermentation refers to the process where rolled leaves are oxidized under a suitable temperature and humidity for five to six hours, after which the leaf veins turn reddish-brown owing to the oxidizing action.

The newly-fermented leaves are supposed to be baked at a temperature of about 80°C (176°F) for six hours or so, and can be packed after they cool down.

Black tea is planted in different provinces of China and has many varieties but there are three main types: Xiao Zhong black tea, Gongfu black tea, and Broken black tea.

Gongfu black tea has many varieties, each of which has its own unique flavor and is often named after the region where it's produced. Listed below are the famous brands of Gongfu black tea, for your reference.

Broken black tea is widely planted in the provinces of Yunnan, Guangdong, Hainan, and Guangxi, and it's mainly grown for export. Broken black tea is classified into various types according to its shape, including tablet tea, fanning tea, and dust tea.

Steps of Infusion for Black Tea

Black tea is a tasteful beverage with potential health benefits. You'll end up with a tea that's too bitter and strong to drink if you're not familiar with the basic techniques. Here are five steps to make a perfect cup of black tea:

Before making a cup of black tea, you're supposed to get a clean tea set (such as a teapot, faircup, and cups), tea, and a kettle of boiling water prepared.

2. Measuring Out the Tea Into the Cup/Teapot

3. Boiling Water and Pouring It Into the Cup/Teapot

Boil the water and pour it into the cup. If a teapot is used, you're advised to fill 80% of the teapot with water (to avoid spillage when pouring).

4. Observing the Color and Smelling the Fragrance

Steep the tea leaves for 2 to 3 minutes. Then you're highly advised to observe the red infusion and smell its fruity fragrance.

As the tea cools down, you can fully enjoy its delicious taste.

Fujian Province is a province located in southeast coastal area with the capital city is Fuzhou and the short name is Min (闽，mǐn). In China, it is one of the earliest open provinces for foreign trade.