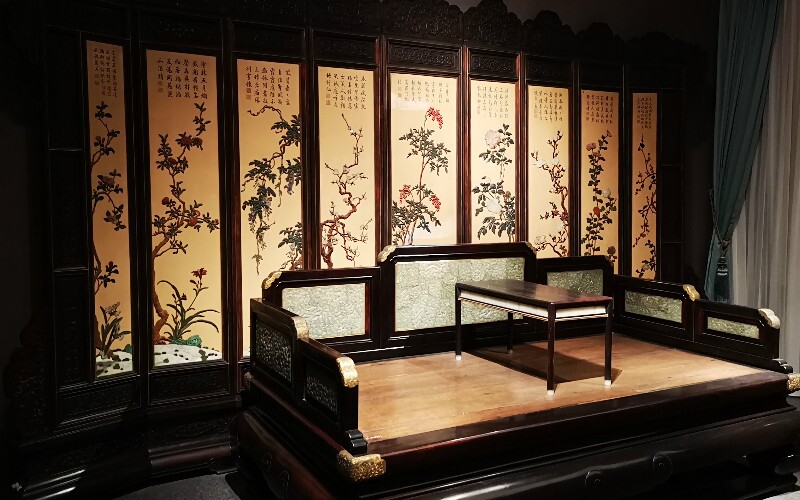 Antique Chinese Furniture from the Ming and Qing Dynasties

China's top antique furniture was made in the last two dynasties. This article will help distinguish the differences between Ming Dynasty (1368-1644) and Qing Dynasty (1644-1912) furniture, using Hall or Chamber Furniture to highlight the reasons for changes in the general style and materials used.

Most of China's antique furniture is hall furniture.

Halls (ting) or chambers (tang), in imperial China, were the largest room in the house, were used to receive guests, in the same way as American "living rooms" or British "parlours"/"drawing rooms" are. They would entertain, and hold weddings and funerals there, but, on almost all other occasions, the family would dine in the kitchen.

Obviously there was a huge difference in quality between the "living room"/"drawing room" of an emperor, down to that of say, an artist, but, this room would house that person’s most exquisite and most expensive furniture to "show off" what he possessed. The hall would have overlooked the garden.

The Principles of Hall Furniture

Imperial Chinese Halls had to follow certain laid down principles, irrespective of budget: four tea tables, (each with 2 chairs) in the centre, two walls of specially carved wainscoting and two plain walls, but hung with decorative panels which could be changed for special occasions, or different seasons.

Most hall furniture from Imperial era China was made of mahogany, or hongmu, a tropical, straight grained, reddish brown hardwood.

The most valuable woods used were huanghuali and zitan, both hardwoods found on Hainan, China’s largest island.

Chinese pear, Huanghuali ('yellow flowering pear'), or huali is from the rosewood family. The colours range from a reddish brown to golden yellow and has a sweet fragrance. The finest examples have abstract patterns like ghost’s faces in the translucent shimmering surface.

Red Sandalwood or zitan, another rosewood, is extremely dense: it sinks in water. Blackish purple to blackish red in colour, the texture of the grain makes it good for intricate carving. It's very slow growing.

Camphor wood was used for wardrobes and clothing storage chests because it’s strong fragrance deterred insects. This soft to medium wood is a large tree from the Laurel family and a medium brown colour.

In general, Ming furniture is constructed from one large piece of precious hard wood. It has beauty, function, and superb craftsmanship, yet it’s design is strikingly simplistic. Clean elegant lines with graceful latticed details, minimal and restrained carving in an agreeable design. The natural wood is said to "speak for itself".

The Ming Dynasty is considered the "golden era" of antique Chinese furniture. Partly due to the abundance of quality hardwoods, but also because of the development of mortise and tenon joints (like how two pieces of jigsaw fit together), requiring no nails or screws. Furniture could, if needed, be dismantled for transportation by horse.

Dovetailing was another method used to join wood (imagine interlocking fingers). Nowadays both joints are still used on quality furnishings. The importance of these joints are that they are simple, strong and because of the perfect fit with no glue needed, the wood can expand and contract according to humidity.

In the later Qing Era furniture was bigger in size, but likely to be made of more than one piece of wood. With greatness, pomp, and almost gaudy embellishments, carvings are elaborate and featured fashionable openwork. Items could be lacquered, decorated with ivory carvings or inlaid with mother of pearl or jade.

The main similarity over the two dynasties was the superb craftsmanship. Also, the best wood available was always used, regardless of future consequences for the environment. Because the best timber was used by the best craftsman, pieces from these eras survived the test of time and are still desirable today.

Reasons for the differences

The economy: Under the fourth Emperor of the Qing Dynasty, Emperor Kangxi, political power stabalized, the economy improved, and more people paid attention to material things. Individuals were allowed to wear bright coloured garments and built huge homes which they adorned with lavish furniture.

Overuse of resources: By the middle of the Qing Dynasty zitan and Chinese Pear wood, initially abundant, suffered from overuse and were rare. Trees were much smaller in diameter. This meant Qing furniture was made with pieces of wood, keeping the best bits (appearance wise), for visible surfaces and using less attractive timber underneath.

Trends, locations, and circumstances influenced the art of furniture making, but nothing altered things abruptly, changes were gradual. Like the ruling power changing from Han Chinese origin in Ming times, to Manchu/Jürchen ethnic origin in Qing Dynasty. Suzhou classic furniture had much more intricate enrichment than say Beijing's straightforward style.

Foreign trade, which increased in the latter Qing Dynasty (in the 1800s), meant a two-way street of influences. You can look up "Chinese Chippendale" to see how China influenced British carpenters. Western tastes began to include lacquer work from China in more affluent properties.

Furniture still remained solidly within the realms of Chinese aesthetics, although it increasingly incorporated certain Western elements like techniques, larger sizing and certain styles or motifs.

Imperial era Chinese furniture made of red sandalwood fetches a staggering price today. Here are a couple of examples of furniture auctioned off at Christie's in New York:

The Forbidden City displays the best of imperial era oriental furniture, some of which was used by emperors and blends in characteristics of Western styling.

Shanghai Museum has a permanent display gallery of furniture from the Ming and Qing dynasties.

Wuzhen Water Town near Hangzhou, Zhejiang, has "The Bed made by 1000 craftsmen" and much more antique furniture in its traditional residences and boutique hotels.

In Xidi Village, a UNESCO World Cultural Heritage site, you can stay in rooms furnished with antique furniture (and a modern shower). It's an authentic experience, one the author can personally recommend, but a solid wood bed is a tad uncomfortable!

Discover China's Antiques and Culture with Us

Our Shanghai tours include a high concentration of places with antigue furniture.

Our Beijing tours will take you to the Forbidden City, and you could customize in a visit to the antiques markets there.