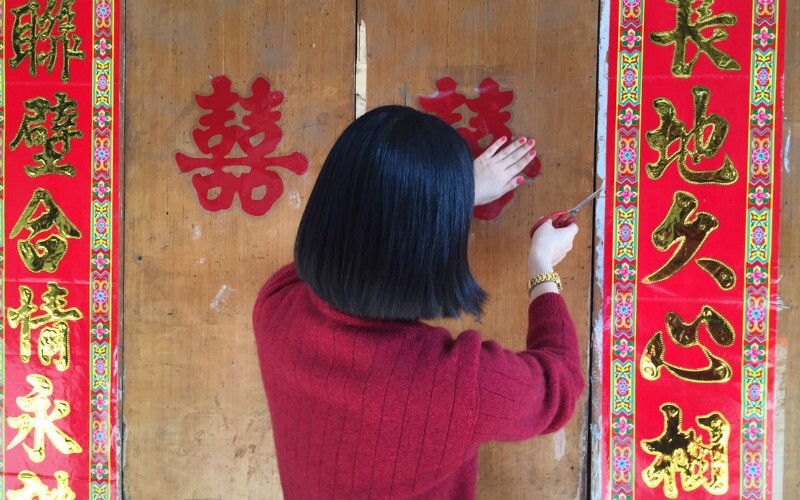 A form of Chinese literature, the couplet varies in content and style, and can be poetic and calligraphic art. Some couplets express people's earnest love to their motherland, some describe the beauty of the nature, and some convey a maxim or best wishes for the coming year.

The History of Chinese Couplets

Chinese couplets originated in the Five Dynasties (907–960), and became ubiquitous in the Ming (1368–1644) and Qing (1636–1912) dynasties, in China and Vietnam, North Korea, Japan, and Singapore. It was a custom to hang peach wood charms on gates of homes to drive away evil spirits during the Spring Festival since before the Qin Dynasty (221–207 BC). Couplets are now used in a similar way.

It was said that the earliest couplet was written by Meng Xu (919–965), king of Houshu State (934–965) during the Five Dynasties (907–960), and it reads: "The New Year enjoys surplus celebrations; happy holiday sounds invoke lasting spring blessings." 新年纳余庆,嘉节号长春

The couplet became popular in the Northern Song Dynasty (690–1127), which is fully reflected from the last lines of the poem Spring Festival Eve by Wang Anshi (1021–1086). It reads "At countless homes a new day dawns; old peach wood charms are replaced with new." 千门万户曈曈日,总把新桃换旧符

Couplets were written on red paper instead of peach wood in the Ming Dynasty (1368–1644), and since then  to write couplets has been regarded as a mark of the cultured life of scholars.

The spring couplet is written in black ink on red paper, one half affixed vertically each side of a door as a Spring Festival decoration, and usually expresses best wishes for the coming year.

The hall couplet, also known as a hanging scroll in Chinese culture, is usually put up in the center of the main hall of each household.

The column couplet is usually carved on the columns of architecture.

It's believed that the Chinese couplet evolved from the traditional Chinese metrical poem, and became more flexible. Characteristics of couplets are listed below.

The couplet has two equal-length lines, however the number of characters in each line can be from four to seven or more. Seven is most common, then five. The first line and the second line have inverse (or identical) tone patterns (each Chinese character is spoken as a syllable with one of four tones) — usually not closely followed. Corresponding characters must have the same lexical category (noun-noun, verb-verb, etc.). Many don't follow this very closely. The last character of the first line is of an oblique tone, and its counterpart in the second line of a level tone. This is often followed.

Chinese people have written numerous excellent couplets, passed down from one generation to another. Below are some for your appreciation.

Smooth sailing with each year; success with each step.