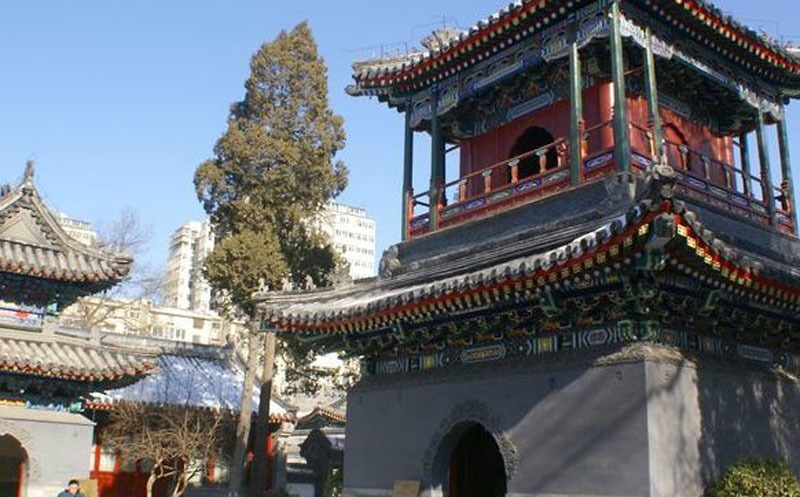 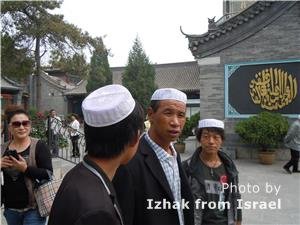 The Beijing Cow Street Mosque ( Niujie Mosque)  is an ancient mosque that is thought to be among the oldest and most important mosques in China. A mosque there was first built in 996 AD, and now the mosque covers an area of about 6,000 square meters or 1.5 acres. The outside architecture is Chinese, but it looks kind of strange or very ancient. The inside of the building looks more Arabic. It is the largest mosque in Beijing, and is an important place for Muslims in Beijing. The mix of Arabic and Chinese architecture and traditions is interesting, and the shopping on the Cow Street is unusual.

The architecture is grand and solemn and Chinese, but it looks strangely heavy as if it comes out of the past. Cow Street Mosque (牛街清真寺) is the oldest mosque in Beijing, China. It was first built in 996 during the Liao Empire era (916-1125), and the present building was constructed under the reign of the Qing Emperor Kangxi (1661-1722). The main buildings are called the Muslim Hall, the Moon House, the Minaret Building, the Tablet Pavilion, and the Bath Room. The mosque faces Mecca. The building style is interesting, and the shopping on Cow Street is unusual in Beijing.

You can walk around in the side areas and alleys, but the main prayer hall is forbidden except for Muslims. Part of what makes the building interesting is the architectural style and mix of colors. You can see Arabic script signs and strange dragons or perhaps gargoyles on the roofs. The blank white tiles and fixtures look Muslim, but the intricately and richly colored Chinese roofs and designs add a Chinese look. Many fences and walls are painted bright red. Dark green girders contrast sharply with bronze red pillars. Between some pillars, there are “Happy Doors” that are a kind of arch. These arches are used instead of the Arabic pointed arch style. The contrasting colors are gorgeous and unusual.

Entering the small courtyard area along a small garden path, you can see some trees and doorways opening into the various buildings. There is the main hall, and there is a two story tower structure that is called the Tower for Watching the Moon. It looks like a two storey pagoda, and it is very much unlike a minaret. There is also a room for reading scriptures. There is a small kiln house, and you may see bicycles parked around the courtyard.

The mosque is located in Beijing's Xuanwu District that has thousands of Beijing’s 300,000 or so Muslims. Cow Street or Niujie in the district is the largest Muslim street in Beijing. Most of the street is dominated by high-rise apartment buildings, but there are many Muslim restaurants in the area. While visiting the street, you might want to try Lanzhou Lamiian. This is a cheap bowl of noodles for about 6 or 10 RMB or 1 to 1.5 USD. It comes with a little garnish, but it is a staple. Some other delicious foods or snacks you might try include Boiled Mutton, Palace Cheese, Sweet & Sour Plum Juice, Braised Ox Tail in Brown Sauce, Xinjiang Rice, Haw Jelly, Ludagunr (Rice Balls with Sweet Bean Flour), and Braised Chicken with Potato and Green Pepper.

The Niujie Mosque was first built in 996 during the Liao Dynasty (916-1125). The Mongols razed the mosque to the ground when they conquered Beijing. A replacement was built in 1442 in the Ming Dynasty and expanded in 1696 under the Qing Dynasty. The mosque underwent three renovations in 1955, 1979 and 1996. The building recently had a US 2.5 million renovation and facelift.

Metro: Take Subway Line 2 to Changchun Jie Station. Take Exit C1 and walk about 1.5km south to the mosque. Or exit from Exit A and take Bus No. 10 for 4 stops to the Niujie Mosque.

Clothing: People can’t wear shorts or skirts. People may say that women must wear a scarf.