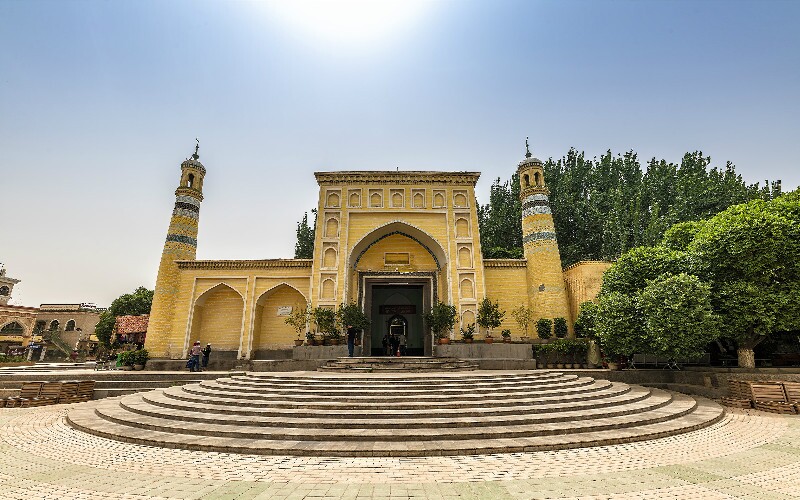 Mosques first appeared in China during the Tang Dynasty (618–907) when Islam was introduced to China by Arabic traders. The first mosques were built in Arabic settlements, including Beijing, Shanghai, Guangzhou, Hangzhou and Quanzhou.

Huaisheng Mosque in Guangzhou, Qingjing Mosque in Quanzhou, Zhenjiao Mosque in Hangzhou, and Libai Mosque in Yangzhou were the oldest four mosques in China.

Mosques were set up before the Ming Dynasty (1368–1644) followed Arabic architectural styles. However, during the Ming and Qing (1644–1911) dynasties elements of traditional Chinese architecture began to appear in mosques. Mosques which were built during these periods, such as Niujie Mosque in Beijing, the Great Mosque in Xi'an, and Songjiang Mosque in Shanghai, are a mixture of Chinese garden and Arabic styles.

Islam was developing fast during the Qing Dynasty and a lot of mosques were set up throughout the country. Nowadays there are about 20,000 mosques in China. Below are four the most architecturally stunning of them.. Niujie Mosque is one of the oldest mosques in Beijing. It was first built during the Liao Dynasty (907-1125) and then it was reconstructed and enlarged three times. The Kowloon Mosque and Islamic Centre is a beautiful big square building with a pink roof and a dome on the top.

It is the biggest Islamic mosque building in Hong Kong and it is located in Tsim Sha Tsui where there are a lot of people from Muslim countries. The building was designed by an architect I.M. Kadri. It can accommodate about 3,000 people at one time. The building complex is in a grand Islamic style with strong religious features. It consists of a gate tower, a courtyard, a teaching hall and a big Hall of Prayer.

In the local dialect "Idgar" means a shrine during a festival. Over years Idgar Mosque has become a sacred religious place as well as a place for celebrating important festivals.

4. The Great Mosque in Xi'an

It is the largest and one of the most important Islamic shrines in China.

The construction started in 742 AD and it represented a combination of traditional Chinese architecture and Islamic art. The Great Mosque was constructed at that time to honor the Islam founders in China. Since then many other mosques have been erected throughout the country. Architecture of the mosque combines traditional Chinese style and some local features with grand appearance and dazzling inner ornaments.

The mosque has a prayer hall which can seat up to 3,000 people. Now this mosque serves as an educational center and institution of Islamic higher learning and also it is the leading mosque in Qinghai.

Back to Muslims in China