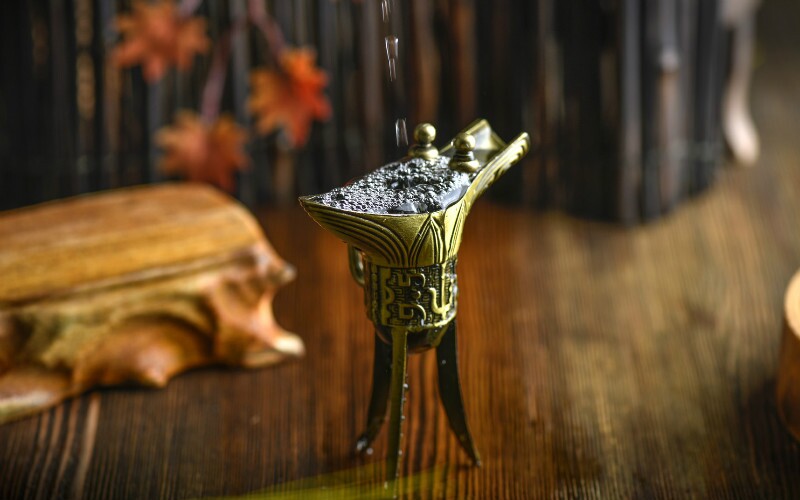 Lizhuang Town is a state-level historic old town in China. It is located in Lizhuang Ba, 19 kilometers (12 miles) from Yibin city in Sichuan Province. Lizhuang was once a fishing village and, during the Han Dynasty (206 BC–220 AD), there was a post in the village. The town was an important trade center during the Ming (1368–1644) and Qing (1616–1911) Dynasties. As it is located at the start of Yangtze River, it is also known as “the first town in the Yangtze Area”.

Lizhuang is situated in a remote area with a population of 12,000. It is famous for its historical relics and scenic spots. Now, it contains well-preserved buildings from the Ming (1368–1644) and Qing (1616–1911) Dynasties, such as temples, ancestral halls, courtyards, and ancient lanes. Walking on the streets, everything in the field of vision gives one a sense of going back to ancient times: well-arranged wooden attics, narrow lanes paved with blue stones, tall thresholds, heavy wooden gates, and well persevered ancient buildings and temples. The layout of Lizhuang remains the same as during the Ming (1368–1644) and Qing (1616–1911) Dynasties. The streets are paved with stones, and buildings in Qing style sit on both sides of the street. These buildings are tall and decorated with carved gate and windows, and all are connected through narrow lanes.

Winding stone stairs with unique features connect the dock and the main street. These vivid sculptures and carvings on the ancient buildings are exquisite and full of artistic value. As Lizhuang is one of the few well-preserved ancient towns in China, it enjoys the same fame as Zhouzhuang, another famous ancient town in China.

Lizhuang is not only famous for its well-reserved historical relics, it is also famous for being one of the cultural centers during the anti-Japanese war (1937–1945). In 1940, a large number of famous Chinese experts and scholars relocated to Lizhuang to avoid the scourge of the war. At that time, Lizhuang was one of the four anti-Japanese war cultural centers in China, along with Chongqing, Chengdu and Kunming.

Lizhuang White Pork is a highly recommended dish. The dish is made with the best, perfectly cut pork, and is famous in Yibin city. Other local dishes include burning noodle and noodles with stewed chicken. The burning noodle dish is made from good water noodles and is served with Yibin yellow bean sprouts, sesame oil, peanuts, sesame seeds, walnuts, pepper, gourmet powder and onions, creating a nice aroma and delicious taste. As it is served with sesame oil and no water, the noodles burn. Lizhuang wine is another recommended local product.

Best Time To There

Lizhuang is located between the Yunnan-Guizhou Plateau and Sichuan Basin, and the local terrain changes from a plateau to a basin. The area enjoys a subtropical monsoon climate, with varying average temperatures for each season. Rain typically falls in the summer, yet rainstorms and hailstones are rare. The best time to visit Lizhuang is in May, June, August, and September.

China Highlights can help you customize a tour to visit Lizhuang Town and other highlights in Sichuan.

How to get there: Visitors can take buses to get to Lizhuang from the South Shore Bus Station in Yibin.

Lizhuang is famous for its historical relics and scenic spots. It has a large number of ancient buildings, and currently contains over 10 well-preserved ancient temples. Those buildings are tall and well arranged, giving visitors a complete view of the architectural characteristics of the Ming (1368–1644) and Qing (1616–1911) Dynasties. The sculptures and carvings on the buildings are exquisite, vivid, and full of artistic value. Lamb Street (羊街) and Xizi Lane (西子巷子) represent the local customs of the Ming and Qing Dynasties. Liang Sicheng, a great modern Chinese architect, calls Luoxian Temple, Kuixing Temple, Nine Dragons Stone tablet and Hundred Crane Window the “Four Wonders of Lizhuang.”

In addition to the exquisite buildings of Lizhuang are ancient domestic houses. The best-preserved ancient domestic houses are in Xizi Lane, which was built in the early days of the Qing Dynasty (1644–1911) and is named after the making and selling of straw mats. The lane is over 60 meters (197 ft) long and 2.5 meters (8 ft) wide. All of the buildings in Xizi Lane are the same: the first floor is a wooden house; the second floor is a wooden house projecting over the water; and the eaves on the buildings almost cover the entire space over the narrow lane. Only 40 centimeters (1.3 ft) divide the two eaves of the buildings on both sides of the lane so that, while standing on the street, one can see just a slice of the sky. This gives Xizi Lane the name Sight of Narrow Sky (一线天). The eaves not only stop the sunshine and the rain, but they also keep out the noisy outside world. Locals have an easy and comfortable life here.

About 2.5 kilometers (1.6 miles) from South Lizhuang, are huge stones shaped like a snail. People usually call this area “Stone Snail Hill” (石牛山), and it lies in front of a rice field. At the foot of the hill is a pool known as the Dragon Pool. In August 1596, during the Ming Dynasty (1644–1911), Wenchang Pavilion was built on top of Stone Snail Hill, and was used to memorialize Emperor Wenchang. The main pavilion is a wooden building 12.5 meters (8.2 ft) high and shaped like an octagon. Each side of the wall is 8 meters (26.2 ft) wide and 12.5 meters (41 ft) high. The pavilion was ingeniously designed, and perfectly used the science of mechanics to create a ceiling with eight helical sides, thus giving it its name. The pavilion has a history of more than 400 years.

Zhang’s ancestral hall has fifty windows made of first-class Nanmu (a famous and expensive wood). Each window has two cranes carved into it, making 100 cranes in total and giving the windows the name “Hundred Crane Windows.” At present, there are only 24 windows left. The Song’s ancestral hall also has 50 windows made of first-class Nanmu. Each window is 2 meters (5.6 ft) long and 0.6 meters (2 ft) wide, and all are carved with vivid cranes and clouds.

Yuwang Temple, also known as Huiguang Temple, was built in the 11th year of the Daoguang (a reign title lasting from 1821 to 1850) during the Qing Dynasty (1831). The temple faces north and consists of two courtyards. In the main courtyard are a dramatic stage, a gate, a main pavilion, a back pavilion, Kuixing Pavilion and Wing rooms. The gate and dramatic stage are decorated with multiple eaves and dougong (a system of brackets inserted between the top of a column and a crossbeam) shaped like Ruyi (Buddhism equipment). The building is spectacular. The tablets are carved with pictures of King Yu combating the flood and the stone sculptures on the gate were written by Zhang Songqing of Lizhuang, who was a member of the Imperial Academy. The temple’s dramatic stage is one of the best preserved ancient dramatic stages in Sichuan Province. On the base of the dramatic stage are stone sculptures carved with pictures. Yuwang Pavilion is the largest existing building of the Qing Dynasty, and its stone tablets caved with nine dragons are known to everyone locally.