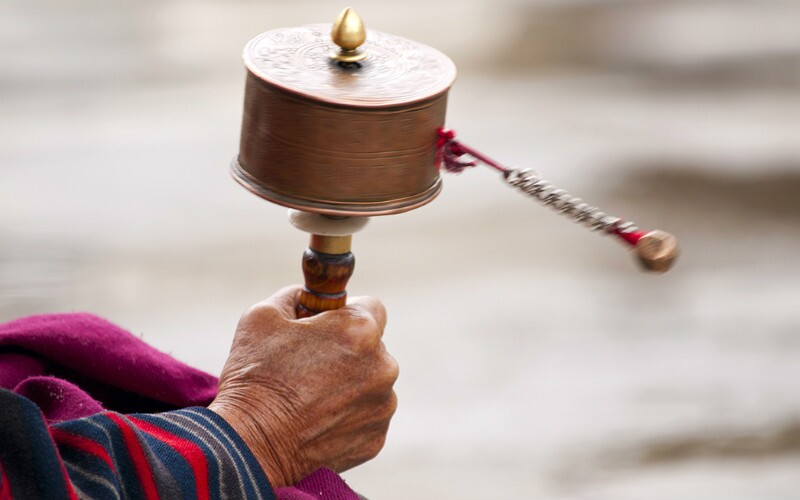 The Monlam prayer festival is actually almost a two-week event. The festival starts on the fourth day of the Tibetan calendar and ends on the fifteenth day is the day called the Butter Lamp Festival (Choe-nga Choepa) that is the greatest and last day of the Monlam Festival.

So one long festival season that lasts for fifteen days starts on the 1st day of the Tibetan year that is the Tibetan New Year Festival called Losar and ends on the 15th day on the night of the full moon called the Butter Lamp Festival.

During the Monlam Festival, Buddhists pray and commemorate the miracles Buddha did about 2,500 years ago in India.

The goal of the entire Monlam Festival season is to remember Buddha and his activities and to pray. So if you go to Tibet during that time, you can see Buddhists go to the monasteries and temples to pray during the Monlam season.

It is said by many that the goal of the festival season is to pray for the long life of all the holy gurus of all traditions, for the survival and spreading of Buddha’s teachings in the minds of all sentient beings, and for world peace.

In the temples, people will light more butter lamps. Butter lamps are simply clarified yak butter or vegetable oil in a bowl with a wick. The lamps produce a smokey light. In Tibetan Buddhist tradition, a lot of lights together are conducive for meditation and focusing the mind.

According to the Root Tantra of Chakrasamvara, "If you wish for sublime realization, offer hundreds of lights.” So on special holidays, people and monks at the temples light thousands of lamps.

On the last day of the Monlam festival called the Butter Lamp Festival, people put many more up and even put them on scaffolds that are several stories high.

During the festival, Tibetans listen to teachings and donate to the monasteries, monks, and Buddhist nuns. They also engage in making merry.

A good place to see this happen is on Barkhor Street in Lhasa where the traditional buildings still stand and where the most important Tibetan Buddhist temple called Jokhang Temple stands.

During the Butter Lamp festival on the night of the full moon, Tibetans traditionally stay out and make merry and sing until dawn, and thousands of Butter Lamps burn to fill the air with their smoke.

Originally, thousands of monks from the main Gelugpa monasteries of this tradition of Drepung, Sera, and Ganden gathered together for chanting prayers and performing religious rituals at the Jokhang Temple in Lhasa that is considered the most sacred Tibetan Buddhist shrine.

Now the Jokhang Temple is on Barkhor Street where you can see traditional Tibetan buildings and watch the ceremonies, rituals, and festivities of the Tibetan New Year holiday season.

Nowadays, the rituals and ceremonies are not as grand as those of pre-modern times. Far fewer monks gather at Jokhang Temple.

Though there are still Butter Lamp butter sculptures and butter lamps, one of the high points of festival days for Tibetan Buddhist monks which were the examinations of monks and the questioning of the leading monk before the Dalai Lama doesn't happen now.

The Dalai Lama lives in India where a Monlam Festival has started in the new Tibetan Buddhist temples there. The questioning before the Dalai Lama happens there.

It used to be that the big butter sculptures were actually big sacrificial cakes that were publicly burned as sacrifices in Barkhor Square. But people still lie down and stand to pray before the Jokhang Temple and dance and sing on the last day of the festival in Barkhor street.