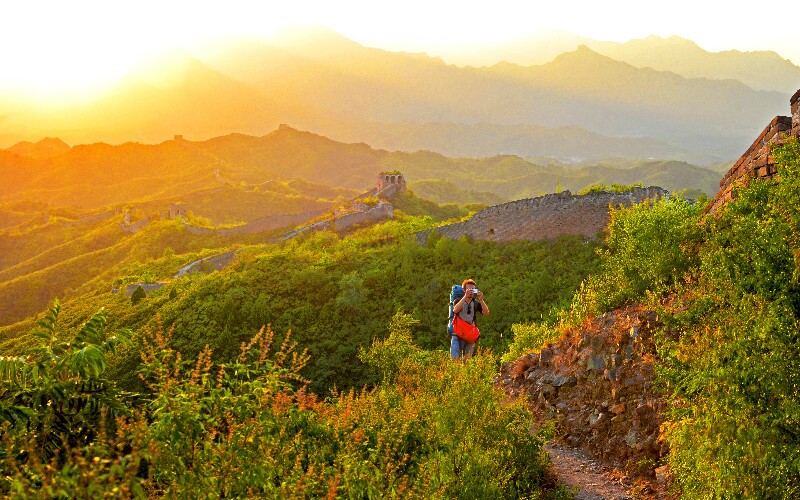 How Long Is the Great Wall of China?

The official length of the entire Great Wall of China is 21,196 km (13,170 mi). Today, only a few hundred kilometers of original wall are left for you to see.

Below we give you the background behind the figures, explaining what is counted as the Great Wall, and how the length of the Great Wall has changed through different dynasties.

It's a misleading figure as some sections of different eras were built on top of or right next to each other. Also isolated sections of fortified wall defending state boundaries are included, not just China's northern border wall(s) that people generally think the Great Wall to be.

All Known Sections of the "Great Wall" Were Measured

Lengths of Great Wall of China by Dynasty

The following table gives a fuller picture of how long wall (approximately) was built when.

What Was Actually Measured

They included in the length trenches and natural barriers like mountains, rivers, and lakes. Estimates of the length of actual wall come to over 6,200 km (3,900 miles). However, this includes many side branches that don't contribute to the west-to-east "length".

The shortest distance from the most westerly point of the Ming Great Wall ('The First Strategic Post of the Great Wall' in Jiayuguan) to its most easterly point (Hushan on the Korean border) is 2,235 km (1,389 mi).

The Great Wall near Beijing

Wan means 10,000, and a li is half a kilometer. So 10,000 li is 5,000 km (3,100 miles), which was a actually a good estimation of the Great Wall length in the Qin Dynasty. However it continued in use through future dynasties, despite the Great Wall becoming longer.

Wan is also popularly used to mean 'a great number' in Chinese. So, a better translation of Wan-Li Changcheng would probably be "the Great-Number-of-Li-Long Wall", or "the Great Wall" for short!

How Long is the Great Wall in Football Fields?

The Great Wall of China is a VERY long wall and hundreds of football fields would still be incomparable to its length. So we'll forget about that comparison…

Let's say instead, the total Great Wall length for all time would cross the US east to west 4.9 times!

Perhaps more usefully… The Great Wall of the Ming Dynasty would be sufficient to go across the United States' Mexican border (3,000+ km) AND the southern Canadian land border (5,000+ km, not counting the Great Lakes and Alaska)!

Learn More about the Great Wall of China

If you want to walk on the Great Wall to admire its majestic winding length, just tell us your interests and requirements, and China Highlights will help you create your own Great Wall tour.

Or please see our recommended Great Wall Tours below for inspiration:

Not interested in the above tours? See more popular Great Wall tours.