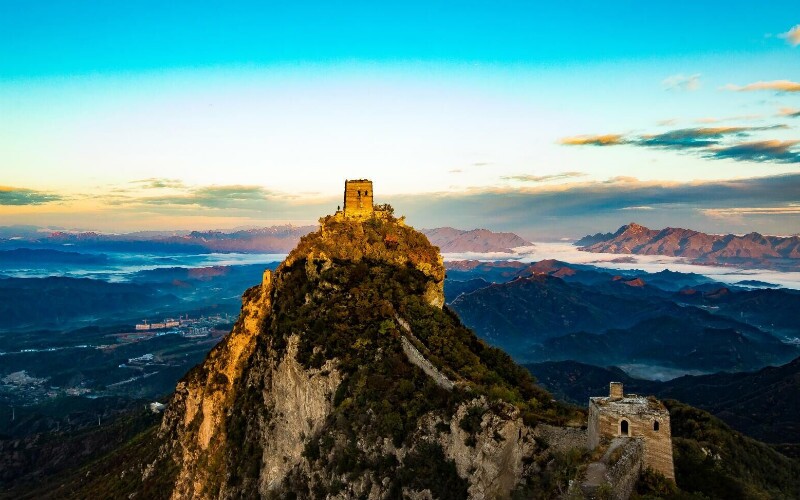 Can the Great Wall Really Be Seen from Space? — Possibly…

The Great Wall can be seen from space, but only from low earth orbit distance and in the right conditions. It can't be seen from the moon.

Why the Great Wall Can't Be Seen from Space… Easily

The Great Wall we see from Earth might be very magnificent, but it is only just possible for the naked eye to see it from outer space (100 km upwards). It would be like seeing a cotton thread on the ground from a fifth-story window (upwards).

Experts now say that only someone with sharp eyes in a low earth orbit (160 km above Earth) can pick out certain sections of the wall in excellent viewing conditions if they know exactly where it is. However, it is much easier to see other constructions, such as highways or canals, such as the Grand Canal, since they stand out more clearly.

Besides, much of the Great Wall is crumbling, and much of it matches the color of the land because it was made of mud bricks or rock cut from the surrounding mountains. The Great Wall follows the ridges, which makes it hard to distinguish from the mountains’ shape.

In 2004, an American astronaut named Leroy Chiao took a photograph of a region about 200 miles north of Beijing. The sun was at the right angle to cast a long shadow, and experts said the Great Wall was visible in the picture.

Leroy Chiao confirmed that the Great Wall can only be photographed from space in very good viewing conditions from a lower earth orbit by someone who is quite familiar with the geographic position of the Great Wall.

Who Said the Great Wall Can Be Seen from Space

The idea started in Europe. English writer William Stukeley wrote in 1754, without evidence or qualification, that the Great Wall could be seen from the moon.

Gradually this idea was popularized, and the Chinese even made it a matter of national pride.

What Did Astronauts Say about the Great Wall from Space?

The second person to walk on the moon, Buzz Aldrin, made the first lunar landing with commander Neil Armstrong on July 20, 1969. When asked whether he could see the Great Wall from space or not, he said he didn't see it— it was a great misunderstanding [that the Great Wall could be seen from the moon].

Jeffrey Alan Hoffman, the former American astronaut, who made five flights as a space shuttle astronaut, announced that he had not seen the Wall no matter how much time he spent overlooking the earth.

Dennis Anthony Tito, the first space tourist from America, went on his space vacation in 2001, and also said the Wall was invisible from the space.

Yang Liwei, China’s first astronaut, who went to space on Shenzhou 5 in 2003, also gave the answer "no" to the reporter who asked if he’d seen the Great Wall after he arrived back on Earth.

The Original Wall Is Getting Harder to See from Space

Northern areas of China are increasingly smoggy and dusty, so it is getting harder to see the wall every year.

The Great Wall was last extensively built up and reinforced by the Ming Dynasty (1644–1912), but nowadays most of it has eroded, hastened by acid rain near more industrial areas. Some have been torn down for construction. Without protection, the Wall will disappear from some places completely!

However, a few places, such as the sections near Beijing that tourists go to, have been rebuilt or protected. These are now the most easily seen sections from space.

Why You Should See the Great Wall with Us

The Great Wall is a national symbol and China's most popular tourist attraction. Our Great Wall tours will enable you to get the best views of the Great Wall possible, including from the air by helicopter

See our most popular Great Wall tours for inspiration: