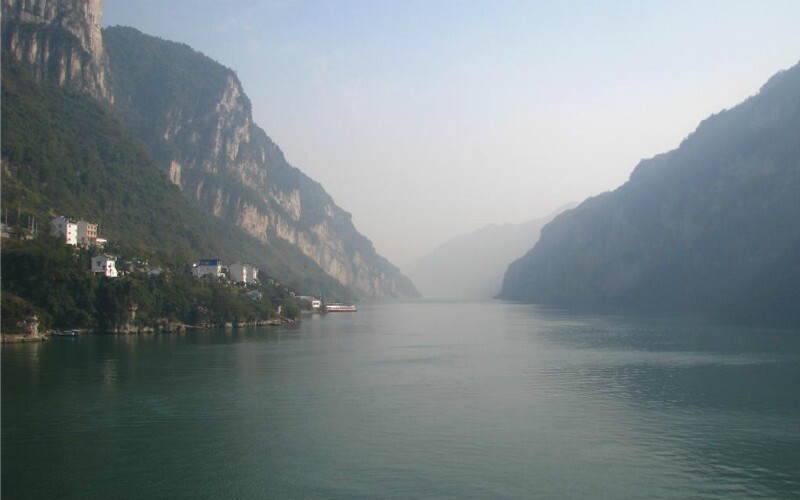 Jinkou Grand Canyon is more than a great chasm carved over millennia through the rocks of the Emei Mountains. It is more than an awe-inspiring view. It is more than a pleasuring ground for those that explore the complexity of its geography, including peaks, rapids, and cultural monuments, rare animals and plants, hike the trails, or float the currents of the turbulent Jinkou River. In 2005, Jinkou Grand Canyon was praised by Chinese National Geography as “one of the ten most beautiful canyons in China”.

Jinkou Grand Canyon starts from the River Ouse in the west and ends in Jinkou River in the east. It runs through Jinkouhe District in Leshan City,  Hanyuan County in Ya'an City and Ganluo County in Liangshan Prefecture. This marvelous canyon and its stunning scenery was carved out by the Dadu River, which originates in the northwestern Sichuan plateau, roaring and shrieking and rolling ceaselessly as it forms the landscape.

Jinkou Grand Canyon is the longest, the narrowest, the deepest, the most dangerous, the oddest and the quietest among a sea of canyons in Sichuan Province. It is 300 meters deeper than the deepest part of Prado Grand Canyon in the U.S., and narrower than the world narrowest – Tiger-leaping Gorge.The Canyon is 30 kilometers long, ranges in width from 4 to 18 miles (6.4 to 29 km) and attains a depth of over 2,600 meters. Along the canyon stand arduous peaks and strange stones; inside roll rapids and waves. Its entire environs are rich in animal and plant resources.

Dawa Mountain is one of the key attractions in Jinkou Canyon. With an altitude of 3,236 meters, it is surrounded and isolated by many a higher cliff, which together form a special scene, a 1.6-square-kilometer plateau surrounded by cliffs. Viewed from afar, it seems like a castle in the air, or a huge ship sailing in the boundless forests. Two streams plunge down from the southeastern cliffs, forming a waterfall with a  height up to 1,000 meters.

On the mountain's peak, you can view the sunrise and sea of clouds. You also overlook the bleak, dangerous canyon to the south, the Emei Summit to the north and Gongga Mountains in the distance to the west. At the foot of Dawa Mountain, five natural lakes ripple with blue waves. The arduous road to Dawa Mountain is too narrow to allow two persons to walk side by side. However, despite the dangerous journey the scenery along the way is spectacular.

White Bear Valley, as another key attraction in the area, is one trench in the north of the Dadu River. It is located at the junction of Leshan County and Ya'an County, about 7 km long and more than 2,000 meters deep. It is famous for its attraction, deep slit (一线天), which lies between two mountains. When looking up from the bottom, the sky seems a small bamboo leaf.

The valley extends itself for miles and miles until the southern slopes of Dawa Mountain. The deep valley is spotted with serene and superb wonders. For example, there are cliffs with a height of nearly 1,000 meters, springs hanging at the middle, waterfalls flying down in shrouds of mist and strange stones bearing the shapes of Buddha, animals and men. Different seasons see distinctive scenes; fall and winter dress the gully in golden yellow and silvery white; spring and summer dress it in grassy green and flowering red. Together with Dawa Mountain, it constitutes a large natural magic picture. The valley is named White Bear Valley, for this was once the natural habitat of pandas.

June, July and August each year is the rainy season, so the best time to visit are April, May, September and October. If tourists want to take an adventure deep down in the valley, you must pay attention to possible landslides and rolling stones during the rainy season. It is highly suggested that tourists wear helmets.