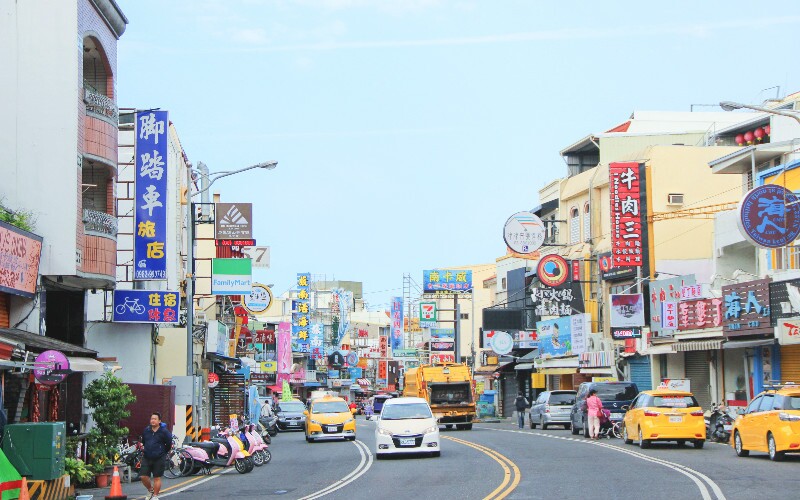 Taipei City is a large and wealthy city on the northern coast of Taiwan, and its transportation system is modern. Taipei City is composed of three municipalities called Keelung, New Taipei, and Taipei that each have their own governmental administration. So the city of Taipei is actually a megalopolis of about 7 million people. This article details greater Taipei's transportation system.

Also Read Top Free Things To Do in Taiwan

Taipei is served by a large modern airport called Taipei Taoyuan International Airport that is about 35 kilometers west of the Taipei Xinyi central business district. It is one of the world's top 20 busiest airports, and there are flights to cities all over the world.

MRT train: A MRT mass rapid transit station is scheduled to open at the airport in 2016. The planned route will start from Terminal II and end in Taipei City. It's designed operational speed is about 100 km/h (62 mph), so it will cover the distance in about an hour or less depending on the number of stops.

Taxi: Taxis are a quick way to travel from the airport, and there will probably be no problems with scamming or crime, but it is advised that female passengers don't take a taxi alone at night. Make sure that they don’t charge you the night-time rate (about 20 NTD higher) for driving before 11 pm or after 6 am.

Taxis wait outside the arrivals hall all day and all night. They take about 45 minutes to reach the city center (1,300 NTD, 44 USD).

Airport Bus: There are several bus companies that offer shuttle buses to Taipei City. Each of the two terminals has a bus lounge and have adequate English signage. You'll find tickets desks in the bus lounges.

The Taipei Songshan Airport handles mainly flights to other cities in Taiwan and also flights to Chinese mainland.

Currently, there are flights to Shanghai, Nanning, Wenzhou, Chongqing, Fuzhou, Hefei, Xiamen and other cities in Chinese mainland.

There are scheduled flights also to Haneda International Airport near Tokyo.

Travel From the Airport to Taipei

This small airport is actually inside Taipei near the center of the city, so this makes travel to Taipei convenient. If you are travelling from China, this airport may be preferred over Taoyuan Airport.

MRT train: There is a MRT metro train station of the Neihu Line at the airport.

Taipei City has an extensive metro system called the MRT. There are currently 10 lines. One of the lines called the Muzha line that goes to Taipei Zoo is on elevated tracks.

The trains begin at about 6 am and the last trains on the lines depart at about midnight, and the fare runs between about 20 (2.50 USD) and about 65 NTD for a one way trip in the city. The MRT system is considered safe, and the stations are well monitored.

English: Stations and trains are clearly identified in English. All stops are announced in four languages: Mandarin, Taiwanese, Hakka and English.

Taipei City has an efficient bus service. All buses display information (destination and the names of stops) in English, so non-Chinese speaking tourists find bus travel to be convenient. Prices are low. An average ticket costs 15 NTD (50 US cents, 3 RMB).

Taxis are numerous, and they are the most flexible way to get around, and taking a taxi in Taipei is relatively less expensive than in most of the world.

However, most taxi drivers cannot speak English, so it is necessary for tourists to have their destination address written down in Chinese to show them, or to have a map handy so that they can point out where they want to go.

Rates: Taxis are metered, so make sure they switch the meter on. The first 1.25 kilometers is charged 70 NTD (2.3 USD), and each additional quarter of a kilometer is charged 5 NTD (.17 USD). An additional 20 NTD is charged for night driving. Tipping is neither necessary nor expected.

Taxi safety: It is advisable for women to be careful about catching a taxi at night alone. If necessary, call one of the bigger taxi companies or go with a friend.

There are bike paths through parks and along most rivers in the city. So taking a bike around for short distances or for touring is in an option. It is permissible to ride on the sidewalks. “Ubikes” are rentable at MRT stops and popular places, using an “easy card” (悠游卡 yōuyóukǎ) and your phone number to register.

It is suggested that foreign tourists not rent a car for driving in Taipei due to the heavy and sometimes chaotic traffic and lack of parking spaces unless they have a lot of experience driving in Taiwan.

However, renting a car to travel in the countryside or between cities by driving along the highways makes more sense and is safer.

An international driver's license is required for driving in Taiwan. These may be used for 30 days. After 30 days, a local driving permit is required.

Read about Taiwan Transportation, and let us help you plan your trip to Taipei. See our Taipei tour planner.