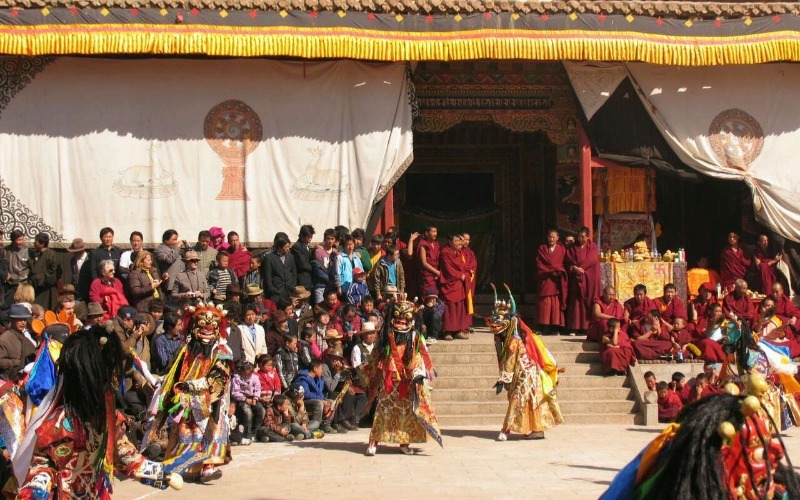 Tibetan New Year, also known as Losar, is an important festival for Tibetan Buddhists in China (mainly in Tibetan areas like Tibet, Shangri-La, and Jiuzhaigou), Nepal, Bhutan, and India. It falls on February 21st, 2023.

Determined by the Tibetan calendar, the Gregorian calendar date for Tibetan New Year changes each year but always falls in February or March.

The major celebrations of Tibetan New Year last for 5 days, from the last 2 days of the previous year to the third day of the new year: from February 19th to February 23rd in 2023.

People in Tibet enjoy a public holiday of 7 days from February 21st to February 27th in 2023. Monasteries, tourist attractions, and hotels stay open though.

How Long Are the Celebrations of Tibetan New Year?

Traditional preparations and celebrations last from the last 2 days of the previous lunar year (from February 21st, 2023) to the third day of the new year ( February 25th, 2023)

The penultimate day of the Tibetan calendar year is the time for saying goodbye to the old year. The most important thing to do on that day is to clean the house.

Tibetan people believe that spring cleaning represents the wish to put away old things and welcome new life, making everything look fresh for the new year.

Religious ceremonies for the approaching new year are held on the day before. Tibetan people go to local monasteries to worship and get blessings from the monks.

In the evening, people get dressed up and have a reunion dinner with their family.

On the first day of their new year, Tibetan people get up early in the morning and put on new clothes after taking a bath. Every family offers sacrifices to gods or ancestors by putting a sacrifice in front of a shrine.

Tibetan people then visit their neighbors with auspicious chema (a box full of barely powder and wheat) and exchange hada (ceremonial scarfs), sprinkle some barley powder in the air from the chema, then drink barely wine and sing and dance.

A reunion dinner is held by each family in the evening.

Tibetan people begin to visit relatives and friends from the second day of the New Year. It is customary for the younger generation to visit their elders, and say “zasidler” (‘good luck') to each other.

They will sit together and chat while having a cup of butter tea or barley wine.

On the third day of Tibetan New Year, Tibetan people choose a lucky hour to hang prayer flags on the tops of roofs to pray for a bumper harvest, good luck, and prosperity in the new year.

One of the most important things done in the monasteries as a spiritual offering is the burning of pine tree branches. This practice is known as Wei Sang.

The smoke from the burning pine tree leaves makes people feel at ease and comfortable. The devoted Tibetan people believe this is a good feeling given by Buddhas, and it can bring them peace and happiness.

Is the Date for Tibetan New Year the Same as Chinese New Year's?

Tibetan New Year is usually within a day or two of Chinese New Year or a month or two later, plus or minus a day or two.

Travel with Us to Experience Tibetan New Year

Tibetan New Year is a festival that's mainly for a family reunion and getting blessings from the buddhas.

Travelers can hardly see any specific public celebrations of Tibetan New Year, but you can still experience a most fervent New Year atmosphere if you are in Tibet.

For example, you can see well-dressed Tibetans with their ethnic clothing walking in the streets, colorful prayer flags everywhere in Tibetan areas, and huge crowds of people in the local monasteries worshiping Tibetan Buddhas and Bodhisattvas.

If you travel with China Highlights during this Tibetan festival, we can bring you to a local family's home, where you can see how they visit friends with auspicious chema and learn why Tibetans practice Wei Sang (burning leaves) in the monasteries. Send us your inquiry!