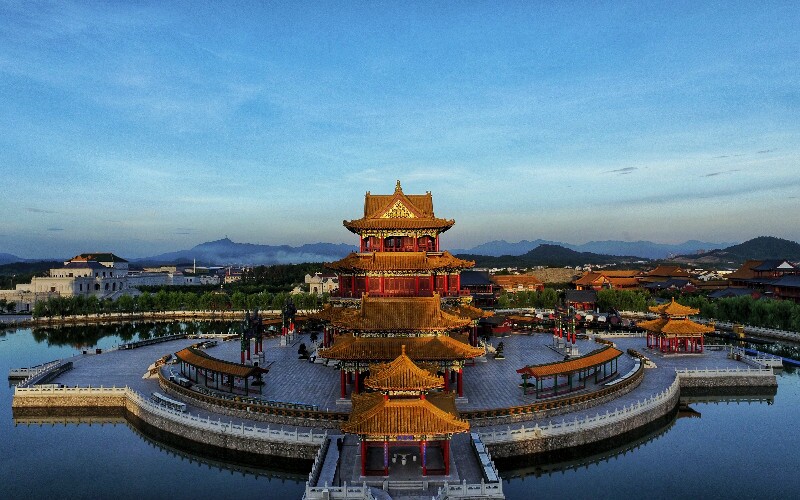 A kind of roof of Chinese traditional building.

From the circular houses built with mud and wood in the Neolithic period to grand palaces with exquisite roofs to the skyscrapers of today, Chinese architecture has evolved over a long period of time.

Below is the historical development of Chinese architecture in different periods.

The Neolithic village of Banpo provides examples of the early architecture in Northern China.

The Shang Dynasty was the first dynasty with written records — inscriptions on bones and bronze objects. Historic excavations of Shang's capital, Anyang, show that the Shang Dynasty's architectural style followed the Neolithic times to some extent. For example, most of the dwellings were partly sunk beneath ground level.

Besides that, buildings with a traditional Chinese style had started to take shape: rectilinear buildings set up on rammed-earth foundations and massive earthen walls surrounding urban centers.

In architectural structures, pictorial bronzes revealed that the original Chinese bracketing system was applied. For architectural materials, bricks and roof tiles had been created.

Throughout the Qin and Han eras, the techniques used for timber buildings gradually improved and were perfected. Builders had mastered firing tiles and could build with stones skillfully. Great palaces and pavilions were constructed. The Terracotta Army in Xi'an was part of the first emperor's huge mausoleum.

Another huge breakthrough was decorations: splendid paintings, silks, and ceramics became parts of the buildings.

During this period, religious buildings – especially Buddhist temples and monasteries – sprung up around China thanks to the government's admiration of religion.

The Sui and Tang eras were the golden age of China's history. The application of bricks had become more popular. Vast public works, such as the Grand Canal, were built.

Chinese roofs became more and more exquisite as advances had been made in baking glazes. The whole architectural style during this period was grand and lavish.

Along with the thriving cultural output, traditional Chinese architectural styles also spread to neighboring countries, such as Korea and Japan.

The Song Dynasty was an important time for ancient Chinese architecture. Great improvements had been made during that period. The scale of the buildings in the Song Dynasty was generally smaller than in the Tang Dynasty. However, they were more beautiful and rich in diversity.

During the Yuan Dynasty, many Tibetan Buddhist temples and Islamic mosques were built. The architectural arts of Tibetan Buddhism and Islam greatly influenced the nation.

Ancient architecture reached its zenith during China's last two imperial dynasties. The production of bricks had greatly increased. The quality and quantity of glazed tiles had exceeded any past dynasties. The official buildings were highly standardized.