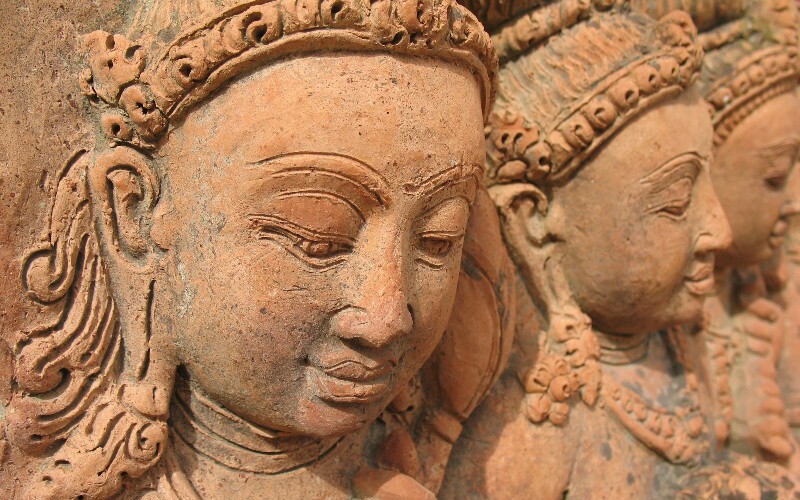 Our China Highlights has listed nine world-known religious sites for you. You can also contact us for a cutomised tour.

Buddha in the Mogao Grottoes

The Mogao Grottoes, commonly known as "the Caves of the Thousand Buddhas", are famous for their beautiful frescos and statues. The work of the Mogao Grottoes spanned a period of 1,000 years.

There are 735 caves, 45,000 square meters of frescos, and 2,415 color statues currently exist in the Mogao Grottoes. They are regarded as the largest and most plentiful Buddhist grottoes in the world. In 1987, the Mogao Grottoes were listed as a UNESCO World Cultural Heritage Site.

In 2000, the Longmen Grottoes were listed as a UNESCO World Cultural Heritage Site. They are one of the finest examples of Chinese Buddhist art with 100,000 statues of Buddha, and 1,400 caves.

As Construction continued for a long time, across many dynasties, the Longmen Grottoes reflect the development and change of China's ancient politics, economy, religion, culture, and other fields.

The are one of the largest collections of grottoes and classic masterpieces of Buddhist art in China. They are as well known as Luoyang's Longmen Grottoes, and Dunhuang's Mogao Grottoes. There are 252 grottoes with over 51,000 Buddha statues. In 2001, the Yungang Grottoes were included on UNESCO's list of World Cultural Heritage.

In 1994, the Potala Palace was listed as a UNESCO World Cultural Heritage Site. It was built by King Songtsan Gampo for his bride, Princess Wencheng.

After the 17th century, the Potala Palace became the palace residence of the Dalai Lama and the theocratic center of Tibet. Nowadays the Potala Palace is a museum, which is filled with countless artistic, cultural, and religious treasures.

Built in 495 of the Northern Wei Dynasty, Shaolin Temple is the cradle of Zen Buddhism and Shaolin Kung Fu. It became famous in the Tang Dynasty and has enjoyed a fine reputation at home and abroad. The Shaolin Temple was inscribed as a UNESCO World Heritage Site on August 1, 2010.

The Big Wild Goose Pagoda was built in 652 of the Tang Dynasty as a Buddhist pagoda for Xuanzang, the Buddhist translator and traveler, to hold sutras and figurines of Buddha that were brought to China from India.

With a simple style and towering structure, this grand and solemn pagoda is an architectural marvel. It is considered as the symbol of the ancient capital of Xi'an.

As the name suggests, the Three Pagodas are comprised of three independent pagodas, forming a symmetric triangle. It is one of the South China's ancient Buddhist architectures, and the symbol of Yunnan ancient history and culture. These elegant, balanced, and stately pagodas are a must-see landmark of Dali City.

The Idgar Mosque, Kashgar, is an Islamic ancient construction with strong religious features. Built in 1442, the Idgar Mosque is the largest mosque in China, and one of the three most influential mosques in Central Asia.

The Idgar Mosque is not only a sacred mosque, but also a place for festival celebration. There are more than twenty thousand Muslims in the Idgar Mosque during festivals.