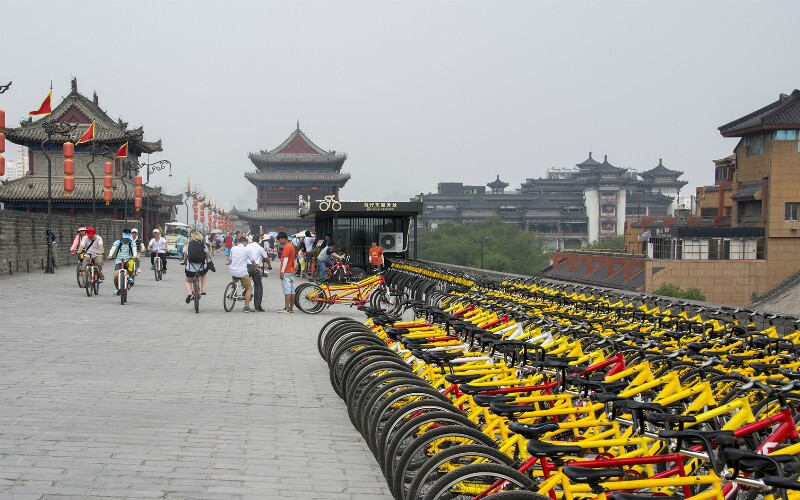 Xi'an is an ancient city with a long history and a rich culture that attracts people. It's like a book that requires careful reading. You can ride around the city leisurely to experience the local customs of the street market, the historical relics, and the old city walls that witnessed historical events. This journey of different routes to go on for two or three days will leave you with many feelings. See China Highlights' tours to Xi'an.

A Route to See Art and Old Architecture

Features: Along this route, you will see arts and old buildings of Xi'an.

The South Gate City Wall has more than 600 years of history. It was built of gray bricks and there are towers at four corners of the wall. Outside the city, you can see a city moat. It is a large scale fortification. The South Gate is also called Yongning Gate. In the area, you can see the Guangzhong Academy that is the highest educational institution of the Ming Dynasty, 1573—1620 A.D. You can buy calligraphy, paintings and seals there. Sanxue Street is an old street with cypress trees. The Forest of Steles has many stone inscriptions that were written by famous writers between the Han Dynasty and the Qing Dynasty or between 206 B.C. and 1911 A.D.

A Route to See the Local Customs

At the Drum Tower and Bell Tower, you can hear the bell in the morning and the drum in the evening. The Bell Tower sits on a high foundation at the crossing of the East, West, South, and North avenues. It is a Xian landmark. It was built at the present site in 1552 during the Ming Dynasty. It was rebuilt and enlarged during the Qing Dynasty (1644-1911).

At the North Courtyard Gate (běi yùan mén), you can find various Xian-style snacks to eat. The famous Gao Courtyard of the Ming and Qing Dynasty is there. Huajue Lane has a big mosque. It is about 700 meters northwest of the Bell Tower. At the Big and Small Leather Yard (dà xiǎo pí yuàn), there you can see the Admiral Mansion and experience the customs and food of Muslims  At the Catholic Church, you can see a combination of Chinese and Western styles of decoration and architecture. At Da Xuexi Lane, there are Muslim decorations and stone steles of the Ming and Qing eras. You'll find ethnic snacks at the North Guangji Street; a flower and pet market at Xicang; and at Yunju Temple, you'll see a temple that was built at the site of a palace of the Tang Dyanasty (it is also called xī wǔ tái).

A Route to See Flowers and Water

Xingqing Park is a place where you can sit in boats in the pond and enjoy the beauty of the gardens in the park. The pond is square shaped and is about 300 kilometers wide. The Xi'an Jiaotong University (is about 3.5 kilometers or 2.5 miles west of the South Gate and Bell Tower. The Qinglong Temple is about 4.5 kilometers southwest.

For a bike trip to see Tang Dynasty sites and artifacts, go to the Zhuque Gate in Yanta District. This was the south gate of Changan that was the capital of the Tang Dynasty. Emperors used to have public displays there. Go to the Small Wild Goose Pagoda. The Shaanxi History Museum is the best place in the area to learn about the local history. There are good displays about the Zhou Dynasty era (1066--221 B.C.), the Qin Dynasty era (221—206 B.C.), the Han Dynasty era (206 B.C.—220 A.D.) and Tang Dynasty era (618—907 A.D.) The Big Wild Goose Pagoda is in a park about 1 kilometer west. You can see the Chunxiao Garden and the Botanical Garden that has a tulip exhibition.

If you start at the South Gate, you can start a tour of city gates and know more about the history of Xian. Go to the Zhuque Gate, and then go to the Wumu Gate that is also called the Small South Gate. It is called the Wumu gate because Jing Wumu fought in the 1911 revolution. Then go to the Hanguang Gate, the West Gate, and the Yuxiang Gate. It is named after Feng Yuxiang who protected Xian when the Qing Empire disintegrated and warlords and generals ruled the area. Then go to the North Gate that was an important site of the 1911 revolution. Then go to Shangde Gate, Zhongshan Gate that is named after Sun Yat Sen who led China in 1911, the East Gate, the Jiangguo Gate, the Heping Gate, and the Wenchang Gate.

A Route to See Both Ancient Xi'an and Modern Xi'an

This trip will take you from the ancient past and advance you to the future. Go to Xingqing Garden on Xingqing Road. It is north of the park that has the former residence of Li Longji. Go to the Eight Immortals Hut that is the biggest Taoist place in Xi'an. It has inscriptions of Emperor Guangxu and Empress Cixi of the Qing Empire. Go to the Small East Gate (also called the Zhongshan Gate), Xincheng Square, East Street that is a modern shopping area, the Bell Tower in the center of the old city, West Street where some Muslims live, the West Gate, Xiguan and Tumen Gate. This tour will show you the city's progress.

You can rent bicycles in the provincial gym on Changan Road or at the eastern side of the North Gate of Northwest University.

China Highlights can help you design a tour to bike around Xian, or just see our Xian tours.